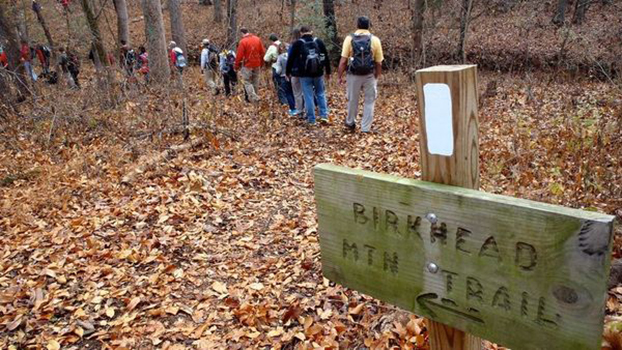 Hikers walk past a sign indicating the Birkhead Mountain Trail.

The Three Rivers Land Trust on Monday announced the transfer of a strategic seven-acre parcel to the Uwharrie National Forest.

The property fills a portion of the last gap along the historic Uwharrie Trail in the section between High Pine Church Road and the southern end of the Birkhead Wilderness Area in Randolph County. On Aug. 14, at 2 p.m. the land trust will host a ribbon cutting to celebrate the transfer to the Forest Service.

From this newly transferred parcel, hikers can now travel south for 28 miles on a single-track woods trail to the southern terminus of the Uwharrie Trail at Highway 24-27 in Troy. Because of a partnership between the land trust and the Uwharrie Trailblazers hiking club, eight miles of new trail have been opened in recent years between the Jumpin’ Off Rock trailhead and the Walkers Creek trailhead.

“Three Rivers Land Trust has worked over the past two decades to add more than 800 acres to the Uwharrie National Forest, as well as filled four of five gaps in the Uwharrie National Recreational Trail,” said Crystal Cockman, TRLT director of conservation. “We look forward to a time when the entire trail is reconnected, and we believe we have that vision in sight. This transfer is just one more important step in the process.”

Three Rivers Land Trust Executive Director Travis Morehead said projects like the transfer would not be possible without federal funding, which was generated from offshore oil and gas leases.

“Historically, these funds have not been solely used for conservation, but instead have been reallocated by Congress for other purposes,” Morehead said. “The Great American Outdoor Act, championed by North Carolina Senator Richard Burr, recently won approval with overwhelming bipartisan support in the U.S. Senate. President Trump has signaled that he would sign the bill into law should it pass the U.S. House of Representatives. … This bill would permanently authorize the Land and Water Conservation Fund (LWCF) for its rightful purpose, the conservation of our nation’s natural resources. We encourage the public to contact your local U.S. House representative to relay the importance on the momentous bill.”

The Three Rivers Land Trust is based in Salisbury and works with private landowners and public agencies to conserve natural, scenic, agricultural and historic places in a 15-county region that includes the Piedmont and Coastal Plain area.