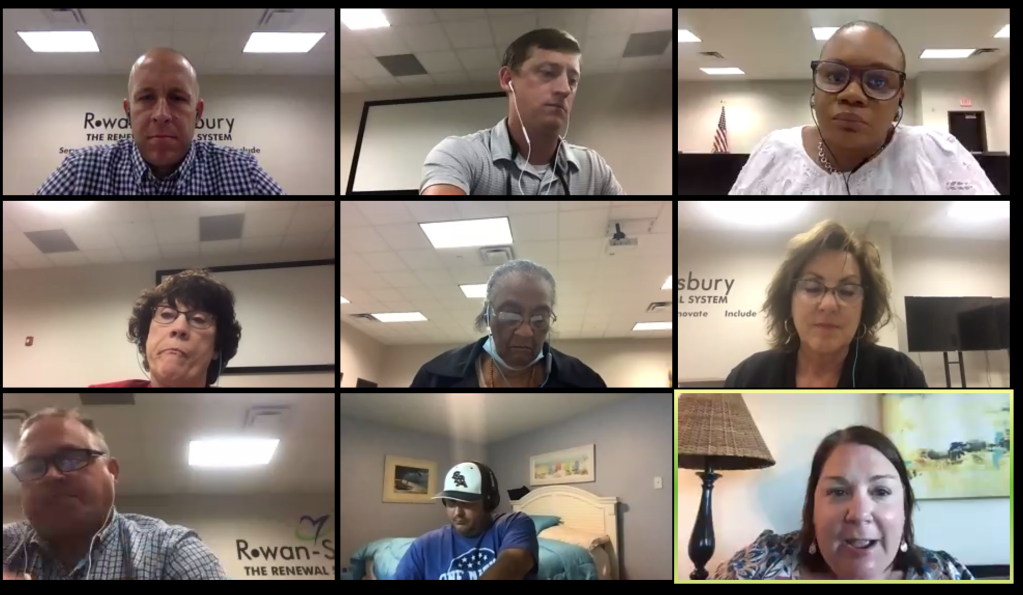 Carl Blankenship/Salisbury Post - The board met in-person in Wallace Educational Forum, though the meeting was still broadcast virtually.

SALISBURY — With about 500 people watching virtually, the Rowan-Salisbury Schools Board of Education on Monday voted to stick with the blended re-entry model suggested by district administration.

Under the re-entry plan, students will be split into A and B groups. “A” students will attend schools in-person Monday and Tuesday. B students will attend Thursday and Friday. Wednesday will be a teacher workday and a virtual-only day for students. RSS Superintendent Lynn Moody said the district will try to work office hours into Wednesdays. Students will not have access to teachers on days labeled “virtual.”

Classes begin Aug. 17 for those who will return to their usual school. Students enrolled in the district’s new virtual K-8 or online through their high schools will return to all-virtual learning.

Leading up to the vote, Moody said teachers are split between wanting to go all virtual and returning to in-person instruction. She noted whichever decision Gov. Roy Cooper made last week would have caused some anxiety. After everything Moody said she had learned, her recommendation leaned slightly toward plan B.

The board heard public comments from a mix of people connected to the district, including current and retired teachers. More than one person suggested schools begin the year virtually.

Alex Reynolds, theater arts teacher at Carson High School, said he is the father of two fifth graders who attend Bostian Elementary School. Reynolds asked the board to consider how the statistics about the COVID-19 pandemic represent people. He said that going virtual would keep people safe, even if not everyone is happy about it. He said his boys want to go back to school and he wants to go back to teach.

“We have to be united for them to be able to learn safely in a classroom,” Reynolds said. “Every parent, child and teacher has to agree to do their best to keep themselves and others safe. That includes wearing masks all day in the whole building.”

Reynolds appealed to the board, if it decided to reopen schools, that it should be united in taking commonsense safety precautions. Reynolds said he believes the plan created by district administration gives Rowan-Salisbury Schools as good a chance as any for a safe return to schools.

COVID-19 is believed to be less prone to spread or cause severe symptoms among young people, but researchers are studying the long-term effects the disease can have on health after infection subsides, including possible lung damage.

Monday was the first time since March that the board met in-person in Wallace Educational Forum. Though in-person attendance was limited to the board and a handful of administrators. Member Dean Hunter was the only member who did not join in person.

Alisha Byrd-Clark was the only dissenting voice in the 5-1 vote to approve the plan presented by district staff, noting her concern for the safety of everyone connected to the school district and some alternate plans adopted by other districts in the state.

The plan was contingent on Cooper’s decision whether schools facilities would be allowed to reopen at all. Plan A would have allowed schools to reopen with social distancing, plan B allows them to reopen at 50% density, which requires other adaptations like shifts or alternating instructional days.

Cooper gave districts the option to choose plan B or plan C as they see fit. Districts across the state have been finalizing plans with a number of adaptions ranging from returning to school at the beginning of the year then going all virtual, starting virtual and returning to school, an ongoing blended model like RSS or returning to an all-virtual model.

The Rowan-Salisbury School Board on Monday also approved a motion extending the enrollment period for the virtual K-8 until midnight on Tuesday to give parents who were waiting on a board decision to make the call for their students.

Moody said the district will update its website with information regularly because people may feel frustrated if they can not keep up with the pace of events.