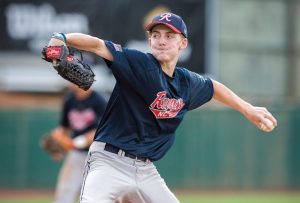 Randolph shelled Rowan 13-3 in six innings in the opener, a game that counted in the league standings.

Rowan lefty Casey Gouge has been outstanding this summer, but he had a short night.

Rowan (15-6, 6-4) got run-scoring singles in the top of the second from Dylan Driver and Charlie Klingler to briefly grab a 2-1 lead, but Randolph’s five-run bottom of the second proved decisive.

The big inning against Gouge started with a single and a hit batsman. No. 8 hitter Alex Martinez’s sacrifice bunt set everything up. A walk loaded the bases, and Randolph was back to the top of the lineup. Tatum Marsh’s two-run single put Randolph ahead to stay. Harris Jackson followed with a booming double.

“I got behind in the count against good hitters,” Gouge said. “Then I came in with fastballs, they were looking them, and they hit some balls hard.”

Tatum Marsh had hits in his last four at-bats and drove in four runs. Jackson, who hit a two-run homer in the fourth after Rowan turned to the bullpen, had three hits and four RBIs. Blake Marsh smacked a solo homer in the sixth to trigger a four-run inning that brought on the 10-run rule.  Easton Morgan had two hits and scored three runs.

Rowan managed only five hits against Braxton Davis, who started and finished for Randolph. Driver, who has been red-hot, had two of them

In the non-league game that followed, Rowan played a lot of people but stayed in the game by turning three double plays.

Rowan just couldn’t get the big hit and left the bases loaded in the first, second and seventh innings. In all, Rowan left 12 men on in a seven-inning game.

Rowan received five walks in the first two innings but could only get two runs. Ryan Street had a run-scoring single. Mattox Henderson walked with the bases loaded.

It was a see-saw affair and was 4-all heading to the bottom of the fifth. That’s when Randolph put together a five-run inning with only two hits. Rowan relievers walked five in that inning and also hit a batter.

The key blow in the game was Parker LaPlant’s two-run double in the fifth that snapped the 4-all tie.

Down 9-4 going to the sixth, Rowan scored three times. That inning included doubles by Zeb Burns and Richard Prange.

Dawson Davis, second of four Randolph pitchers, earned the win. Morgan got the save, ending the game with a strikeout with the bases loaded.

Kaleb Burleyson, second of the five Rowan hurlers, took the loss. Burleyson walked the lead-off man in the fifth. He scored the run that put Randolph ahead to stay.

Jonathan Spry started on the mound and did well the first two innings. After two miscues, Randolph broke through against Spry with three unearned runs in the third.

Rowan tied the game at 3-all and again at 4-all prior to Randolph’s decisive fifth.

Caden Hudson got a start in center field and had two doubles to lead Rowan’s offense. Burns got on base four times. Driver had two more hits.

Rowan slipped into fourth place in the standings, with Randolph (12-9, 7-4) moving up to third behind frontrunners High Point and Lexington-Davidson.

Rowan gets back at it on Monday night at Newman Park against Kannapolis.