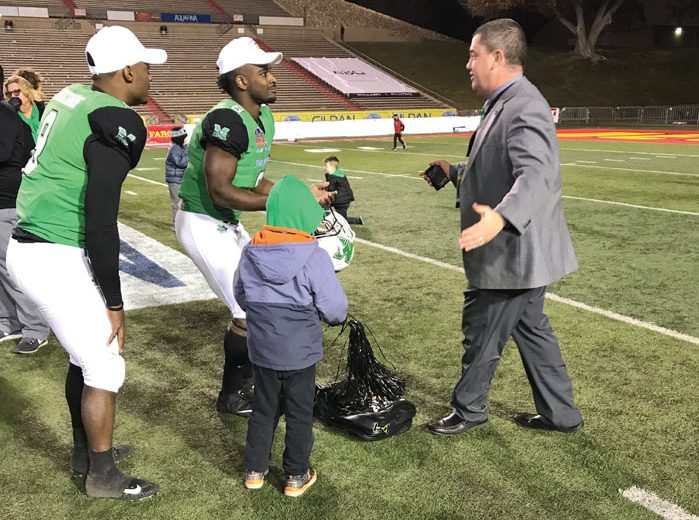 HUNTINGTON, W. Va. — Jason Corriher was 4 years old, tucked into a comfortable China Grove bed, but then he woke up suddenly to the sound of both parents screaming.

He didn’t expect that noise to be a positive, but when he investigated, it was all good. This wasn’t a normal night. It was April 4, 1983.

Dereck Whittenburg’s long jumper was way short, an airball, but it became the perfect pass. Lorenzo Charles, who had scored two points prior to that game-deciding moment, was in the right place at the right time. He caught the ball and dunked it. Many people immediately lost their minds. That group included Corriher’s parents watching on TV and N.C. State coach Jim Valvano, who was on the scene in New Mexico. The Wolfpack, 8-6 in the ACC regular season, somehow had won the NCAA championship game against the favored Houston Cougars, a crazily athletic bunch known as Phi Slamma Jamma.

Houston had amazing players in Clyde Drexler and Hakeem Olajuwon. Those two would combine for more than 49,000 NBA points and 22 all-star nods. N.C. State had good players, but no amazing ones. So Charles’ stuff became the stuff of legends. It was a Cinderella story that made life-long sports fans out of a lot of 4-year-olds.

Corriher’s father was an N.C. State graduate. His mother didn’t go there, but she supported her husband and bled the red. She had equal devotion to the cause.

“That night when I was 4, my parents yelling and N.C. State winning the championship, that’s my earliest human memory,” Corriher said.

Corriher is 41 now;  soon to turn 42. Today is his son’s eighth birthday. It’s also his 17th wedding anniversary. Like his father, Corriher was fortunate enough to find a girl with equal devotion to the cause.

Corriher has been been lucky enough and good enough to have spent all of his working life in sports. The Corrihers reside in Ohio, but home now is Marshall University, the Thundering Herd, just across the state line in Huntington, W. Va. The commute to work is 18 miles.

Corriher’s job title at Marshall is assistant AD and director of media relations. That means he keeps a stream of information and stats flowing to the people who write about or talk about the Thundering Herd.

When he first arrived at Marshall, there were three newspapers, owned by three different companies. Now there are two newspapers, and they’re owned by the same company and share content. The media world is evolving.

The only silent period for Marshall athletics — when there’s not a pandemic going on — is June, plus the first half of July. Those are the six weeks out of 52 that Corriher gets to relax a bit.  The rest of the year, he’s got a 9-to-5 office job, but that eight-hour shift is merely the opening act for the games, which happen at night or weekend afternoons. About the only time Corriher is noticed is when he’s introducing a football or basketball head coach at a press conference, but behind the scenes, the work of a sports information director rarely stops.

“It’s usually a job that is 24/7,” Corriher said. “But no one has a playbook for a pandemic. All we can do right now is follow the protocols.”

Corriher had to get the word out back in April that all of Marshall’s summer camps were being canceled.

His most important role in normal times is serving as the liaison between Marshall’s student-athletes and the media. He’s the gatekeeper. You go through him if you want to talk to them.

Corriher naturally grew up as a hardcore N.C. State fan. He had little choice. He loved sports and tried most of them.

“From the time I was 5, there was a sport for each season — soccer, basketball, baseball,” Corriher said. “I was into sports in a big way.”

Football and tennis came later. His strongest sport by the time he got to South Rowan High was tennis. He played No. 2 singles most of his years at South and was No. 1 as a senior. He made All-Central Piedmont Conference twice, no small feat. The Raiders competed in 4A against Winston-Salem schools.

Corriher’s fondest South sports memory is from football. He was a backup receiver, playing behind Adrian Parker. Parker, who would catch a lot of passes for Catawba, was one of the best in school history, which meant Corriher didn’t play much. In the fall of 1994, South prevailed at A.L. Brown, the last time the Raiders won a football game in Kannapolis.

“Adrian caught a long touchdown pass from Kevin Sides that night,” Corriher said. “I didn’t play a down, but it didn’t matter. We won, and I was ecstatic. The field had gotten chewed up,  so I scooped up a chunk of the Kannapolis logo with my helmet. I’ve still got that clump of grass and dirt in a jar. My wife knows how much it means to me. Every time we’ve moved, she’s made sure that jar went with us.”

There was never any question Corriher would go to college at N.C. State. His dream career was broadcasting, becoming a studio guy on ESPN  or maybe a play-by-play announcer like Jim Nantz or Al Michaels.

He entertained thoughts of walking on to the N.C. State tennis team, although that plan lasted about 30 minutes.

“I went out to watch a fall tennis practice,” Corriher said. “I was a good high school player, but there were 13 guys out there, and I definitely would’ve been No. 14.”

His first two years in college he made little progress toward his broadcasting goals.

“There was a void in my life because I’d been playing sports since I was 5, and now I wasn’t,” Corriher said. “I was still trying to figure out what I wanted to do next. My junior year at N.C. State came, and I was still looking.”

He wandered into N.C. State’s sports information office, willing to volunteer for anything, and his timing was as good as Lorenzo Charles’ timing had been 15 years earlier. Annabelle Vaughan had arrived at N.C. State from East Tennessee State to handle media relations a month earlier. When Corriher ventured in, she was looking for a few good men or women. She signed him up. That was in November, 1998.

“Annabelle told me, ‘Well, let’s get you started,’ ” Corriher recalls. “The next weekend I’m in the press box at Ericsson Stadium in Charlotte for the UNC-N.C. State football game. It was Torry Holt’s senior year and it was exciting (UNC won 37-34). I loved it. I could see this was a chance for me to get involved with sports again. This was a chance to use my writing skills. Sports information very quickly became the path I wanted to follow.”

That day in Charlotte — Nov. 28, 1998 — was also the day Corriher encountered his future wife for the first time. It would be hard to convince either of them that things don’t happen for a reason. Kim Gaffney, now Kim Gaffney Corriher, was at Ericsson Stadium, covering the Wolfpack for Technician, N.C. State’s student paper.

“I got really lucky,” Jason said. “I tell everyone that Kim is my director of life operations. She’s the rock in our family. She’s the one who keeps us grounded and keeps us going.”

Corriher graduated from N.C. State in the spring of 2000 with a degree in mass communications and kept working in the Wolfpack’s media relations office. There were some 18-hour days. Most of his toil wasn’t nearly as glamorous as that first outing at Ericsson Stadium. He promoted lower-profile N.C. State sports such as cross country, women’s soccer, men’s tennis, even the rifle team. He gave them everything he had.

“It was worth all the hours, getting to learn the media relations business and being a part of the ACC,” Corriher said.

In September, 2002, he moved on to the Big South Conference. He was with that league 21 months, first as assistant public relations director, and then as PR director for the conference.  He handled the league web site and maintained the league’s record book.

In June, 2004, he became the sports information director for a college for the first time when Marist College hired him. That meant relocating to Poughkeepsie, N.Y.

“In 2007, Marist made the NIT and won at Oklahoma State in the first round in a great environment for basketball,” Corriher said. “Oklahoma State had Jameson Curry (who averaged 40 points a game in high school in North Carolina). That was a huge moment for the Marist Red Foxes.”

His happiest memory from the NIT was handing out pregame notes and providing tidbits of information about Marist’s players to Reid Gettys, the TV color man for the contest.   Gettys had set a school record for assists for the Houston team that lost to the Wolfpack in 1983. Corriher addressed him politely as “Mr. Gettys,” but he also let him know he was a proud graduate of N.C. State.

Marist’s second-round NIT opponent was none other than N.C. State, which meant an emotional homecoming for the Corrihers.

The RBC Center was booked (with a concert and the NCAA women’s tournament), so that NIT game was played at Reynolds Coliseum.

“That was the first time I’d ever been against N.C. State in a sporting event,” Corriher said. “It was a weird feeling. I was back at the place I’d worshipped most of my life — and working for the other side. The Red Foxes were not successful in Raleigh.”

The next job for Corriher was Ohio University in Athens. He was hired by the Bobcats in the summer of 2007.

Ohio had 16 sports, while Marist had 23, but Ohio was a step up, with a much higher profile football program. Corriher got to promote four All-Americans while he was with the Bobcats and traveled to two bowl games.

The Ohio men’s basketball team also created some excitement when it qualified for the NCAA tournament in 2010 and upset Georgetown.

“Twitter was just taking off during my years at Ohio,” Corriher said. “We could see what an important tool it could be as far as helping fans follow games. We got a Bobcats Twitter account started and made an impact on the fan base.”

Marshall was next. Corriher started his employment there on Aug. 1, 2011. Six weeks after he joined the Thundering Herd, Marshall traveled to play rival Ohio. Kim was still completing her contract with Ohio, where she was a learning specialist working in academic support for the football players. She’s always in the press box with Jason on game days, assisting him, but on that day, they were on opposite sides of the fence. Kim wore the bigger smile when it was over. Ohio routed the Herd, 44-7.

Corriher is still at Marshall nearly nine years later. He bleeds green now. He’s even does play-by-play as a one-man crew on women’s basketball broadcasts.

Other opportunities may come his way, but if this is the last stop for him on the sports information train, he won’t complain. He enjoys what he’s doing.

Kim has always found work wherever Jason has relocated. She handles government projects and grant-funded programs for a group of hospitals in Ohio. She’s also part of the Marshall faculty as a learning specialist and academic tutor.

Jason doesn’t get home to China Grove much. His workload has limited those visits.

“I’ve never actually been to Carson High School, even though I have driven by it,” Corriher said. “My dad still follows South Rowan football.”

The Corrihers worked so many hours for so many years that they didn’t think a child would be part of the master plan, but after they settled in at Marshall, that thinking changed. Gaffney Corriher was born in 2012.

Corriher said he plans to enjoy every swing Gaffney takes in Little League baseball this summer. He’s thankful he’s getting to play.

If Gaffney becomes a Marshall football player, that will be wonderful.

But if he becomes an awesome media relations guy, well, that will be fine, too.

“We’ll encourage him to follow his dreams,” Corriher said. “Whatever they may be.”