Josh Bergeron: 60 years ago, Wright became a force for change 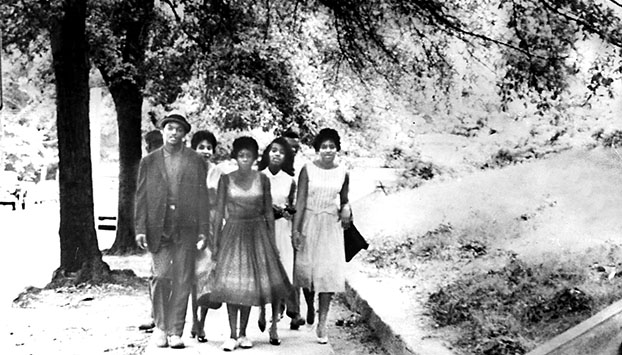 Wright says this photo depicts members of the Greenville Eight leaving the library after a protest. Wright is pictured here in the middle of the front row. To her right, is Jesse Jackson.

Back then, DeeDee Wright was a civil rights baby.

When she was a teenager, she stuck her neck out to move ahead and push her city forward — something she’s continued to do throughout her life. And she hasn’t been worried about calling things as she sees them — whether that’s in Salisbury or Greenville, South Carolina.

Wright was the youngest member of a group that became known as the Greenville Eight, which staged a sit-in at the Greenville, South Carolina, whites-only library. Their protest ultimately led to the integration of the city’s libraries. The 60th anniversary of the peaceful protest was last week.

“We knew exactly what we were doing. We knew that we were being disenfranchised in not being able to use the city’s public facilities. I think that this one incident was a paradigm shift in the way that the city operated,” said Wright, who’s now working on a book about the experience, her life and other protests with the working title “I did the (W)right thing.”

In the colored library, Wright said, there were no reference books. If a patron at the colored library wanted an encyclopedia, he or she would need to ask a librarian to have the book sent over from the white library. It may seem like a foreign world in 2020, but it was reality in 1960.

Wright’s activism found its spark when she became president of the NAACP’s youth chapter. Jesse Jackson, a civil rights activist who was then just a college student home on break, Wright and other youngsters held meetings at their church to plan the protest at the library. And there were other demonstrations, too, including a wade-in at the local public pool.

“There was a concerted effort on behalf of the youth council of the NAACP,” Wright said.

There was one incident in particular, Wright said, that got her thinking. As she got on a public bus and headed toward the back, she set her books next to a white girl in a seat near the middle. The white girl pushed her books on the floor and Wright reacted, slapping the girl. Using a racial slur directed at Wright, the white girl called attention to the incident, the driver stopped the bus  and a policeman came on and told Wright she was under arrest and to get off the bus.

But Wright said she wasn’t going anywhere unless the white girl came, too. So they both went to the nearest police station and their parents were called. At the station, the white girl told the policeman her mother said Black people “stunk.”

Wright told the girl to smell her and the girl said, “no.” The incident ended peacefully and they both went home. Wright said they eventually became friends.

When Wright and seven others protested in the whites-only library in 1960, it wasn’t the first time a protest had occurred there, but it was a memorable and impactful one. It led to a lawsuit that was eventually dismissed and the library was integrated.

That integration rippled throughout the city and walls started to crumble, but it also aroused anger. And that anger was directed at Wright and her family in the form of threats. So, they moved to New York. Life took her to Atlanta and Missouri for college as well as Florida. She found her way back to Atlanta and, eventually, Salisbury after a call from Elizabeth “Libby” Duncan Koontz, who asked Wright to come and help her. Koontz was a national figure in education, the director of the United States Department of Labor Women’s Bureau and the assistant state superintendent from 1975 to 1982. She had been diagnosed with cancer.

Today, Wright sees hope in modern-day protests that have sprung up across the nation following the killing of George Floyd in Minneapolis, Minnesota. Again, she said, it’s young people who are leading the charge for change.

“I think that the strategies that were used have been amplified during the Black Lives Matter movement,” she said. “What I find different is that we were asking for equal access and when I see the Black Lives Matter protests, they are asking for substantial policy changes in how we do business and how we treat people. Even here in Salisbury and the county, we have to look at what policies are being enacted and how they’re affecting not only Black folks but poor people, too.”

And while Wright says the city of Salisbury has been attentive and reactive to protests, Wright doesn’t see the same urgency to enact change in county government, where there’s been only one Black commissioner.

“People don’t hold the county accountable to the same level that they hold Salisbury,” she said. “I’ve seen more change in Salisbury than I’ve seen in the county.”

What’s more, Wright says there needs to be an honest dialogue, a coming together of groups different from one another. It needs to be a conversation about people’s fear about change or lack thereof.