EL PASO, Texas — Leonard Owens’ highest-scoring basketball nights came in gyms far off the beaten path  — places such as Scottsbluff, Nebraska, and Camargo, Mexico, but in his day, the Salisbury High product was something special. 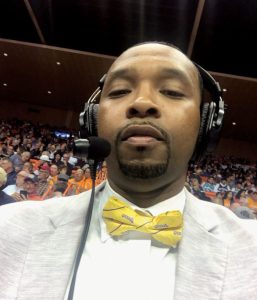 Extra long and extra lean at 6-foot-6 and 190 pounds, Owens appeared to be made of elastic fibers. The “Rubberband Man,” is what broadcasters liked to call him.

Owens could glide and slam, but he also could defend forwards or guards with those long arms. He could handle and dish, which equipped him with a unique skill set. In 2000-01, the only healthy season he was blessed with in big-time college basketball for the University of Texas at El Paso (UTEP), he ranked in the top 10 in the Western Athletic Conference in blocks and assists. That’s a startling combination.

Owens is quick to remind everyone that the wacky WAC was serious business in those days. Fresno State had a roster stacked with draft picks. Tulsa, SMU and TCU had plenty of talent. The UTEP Miners enjoyed their extended trips to Hawaii — four days and three nights.  There was R&R on the beaches, but the WAC tussle against the Rainbow Warriors was never a joyride.

“Fresno State had two first-rounders and two second-rounders (in the 2002 NBA draft),” Owens said. “But the best guy I played against in the WAC was SMU’s Jeryl Sasser. He was strong. He made it to the NBA.”

In 2000-01, eight of the nine WAC teams won at least 14 games. Owens had stat sheet-stuffing moments for the UTEP team that went 23-9, tied for second in the league and played in the NIT. He averaged 5.8 points, 4.3 rebounds and 3.2 assists, but a lot of his job was defense.

“People thought of me as a slasher/dunker, but I got my share of blocks,” Owens said. “Good memories. We beat Fresno when they were ranked 17th or 18th in the nation. I had a big game against McNeese State when we beat them in the NIT my junior year. We won (against Houston) in the Sun Bowl Classic, the basketball tournament that was played before the football bowl game.”

Owens is 40.  Two of his three children have gone on to college. His 11-year-old still needs convincing occasionally that his dad was a player.

“He tests me,” Owens said. “I have to pull out the archives. I have to show him the clippings.”

El Paso, Texas, is two miles from the Mexican border. It’s become the permanent home away from home for Owens. In El Paso, he’s still remembered fondly  for his college days, as well for his exploits for teams across the border in Juarez.

Owens is employed as sales manager for El Paso’s KFOX-TV. He worked a number of UTEP games last season as a color commentator for ESPN+  and hopes to do more.  He’s also the senior trainer at Street Cred Sports, where he passes on his knowledge to young basketball hopefuls.

“We don’t have travel teams, it’s all individual, one-on-one instruction,” Owens said. “We train kids every year who go on to play college ball.”

Owens’ own schooling began in Salisbury.

He moved up to the Salisbury High varsity as a sophomore shortly before Christmas in 1995. He scored 14 against West Rowan in his third varsity game and 22 against East Rowan’s Mustangs in his fourth. He averaged 9.5 points that season.

Between his sophomore and junior seasons, he sprouted from 6-3 to 6-6. Those three inches were the difference between good and great.

Owens didn’t get to play on super Salisbury teams, but his senior season the squad won the Sam Moir Christmas Classic at Catawba. Robbie Jefferies, Thad Pryor and Chris Cline also played well in that tourney. The Hornets blew out North Rowan in the semis and edged South Rowan in an exciting final. Owens was voted tournament MVP.

Owens averaged 16.5 points as a senior and made first team all-county for the second time. He scored 915 career points for the Hornets.

“Christmas tournament MVP is the best high school memory,” Owens said. “Next would be my windmill dunk over that big man at Davie County.”

Salisbury head coach Sam Gealy knew Owens was a Division I prospect and gave him a chance to operate at point guard.

“That’s why Coach Gealy is as highly regarded as he is,” Owens said. “I was able to work on my ball-handling and passing skills in high school. Playing me at the point prepared me for college basketball.”

Owens’ grades weren’t stellar when he graduated, so he elected to follow a trail already blazed by Salisbury High stars Bobby Jackson and Bobby Phillips.

Owens’ senior season at Salisbury coincided with Jackson’s arrival in the NBA as a first-round pick out of the University of Minnesota, a program that he had led to the Final Four. Owen’s senior high school season also coincided with Phillips’ great 1997-98 season for Western Carolina University that earned him accolades such as Southern Conference Player of the Year.

Jackson and Phillips spent critical years after Salisbury with the junior college program at Western Nebraska in Scottsbluff. For Jackson, that had basically been the only option he had after high school. Then he tore an ACL his first week of practice, so he actually was at Western Nebraska for three years.  Eventually, he settled in and thrived.

The coach at Western Nebraska was Dave “Soupy” Campbell, a former Catawba athlete whom Gealy trusted to hold players accountable on and off the court and prepare them for big-time basketball. Western Nebraska is a three-hour drive from Denver, a quiet world of barren plains and cornfields. There’s not much to do in Scottsbluff in the late fall, winter and early spring, except watch it snow.

“Bobby Jackson was a big influence on me and he explained to me there wasn’t going to be anything to do at Western Nebraska, but it had been good for him to get away,” Owens said. “My grades needed work, so I decided to go. I got to Nebraska in August, and I was in the middle of a hailstorm.”

There was a lot of wind-chill misery outside during the next two years, but in the classroom and in the gym, things went smoothly. Owens’ first year, the Western Nebraska Cougars were 32-6.

“We placed or sixth in the national tournament (in Hutchinson, Kansas) that first year,” Owens said. “Then my second year, we had two starters flunk off and everyone was saying we were going to have a terrible season. But I led us to 22 wins and the region championship game.”

“I’m ahead of Bobby Jackson on some of those stats,” Owens said cheerfully.

Including points. Jackson scored 819 during his days in Scottsbluff.

Owens averaged 13.4 points, 5.6 rebounds and 3.3 assists as a sophomore against stout competition and had a number of options as he tried to find the right fit for the next step in his basketball odyssey.

Owens had a chance to come back to North Carolina to play for Western Carolina or Appalachian State. He’d also done enough to interest Colorado and Wyoming. But UTEP, with head coach Jason Rabedeaux, who had just finished his first year at the helm,  looked like the best option.

His junior season, Owens played on that fine UTEP team, led by Brandon Wolfram, that won 23 games and was invited to the NIT. Many of his teammates had been recruited by Don “Bear” Haskins, the head coach at the school from 1961 to 1999.  UTEP was still known as Texas Western College when Haskins coached an upstart team with no conference affiliation to the 1966 national championship at Cole Field House in College Park, Md.

That 1966 title game is looked back on now as a historic moment in the world of college basketball. There was an all-white national semifinal played between perennial powers Duke and Kentucky. Texas Western, which beat Utah in the other semifinal, then handled Kentucky, 72-65, in the title game and finished 28-1. Texas Western was the first national champion with a starting lineup of all Black players.

The result of that game sped up hoops integration at Southern schools. By the next basketball season, every conference in the South was integrated, including Kentucky’s conference, the SEC.

The film “Glory Road,” released in 2006, is loose with some facts for the sake of drama, but it does a credible job of telling Texas Western’s amazing story.

“I got to meet those Texas Western guys personally,” Owens said. “Coach Haskins and the players came to many of our practices and games.”

After that solid junior season he had for UTEP, bigger and better things were expected of Owens as a senior.

He had eight assists opening night. Then he had three blocks in UTEP’s second game. Against Washington, he had seven points, five assists and three blocks, but a knee injury in late December, right before WAC action started, train-wrecked his season — and UTEP’s. The Miners went 10-22. Rabedeaux lost his job.

He didn’t return to the floor until Feb. 14.

His final game for the Miners  on Feb. 28 was his healthiest outing since December. He went out strong. He made three 3-pointers and had 14 points, six assists, four rebounds and two blocks in a 63-61 loss to SMU.

Owens played briefly in Germany, but his knee was still a factor. His on-the-court success after UTEP came in Mexico.

He was a standout for Juarez Gallos de Pelea, the Chihuahua City Dorados and the Camargo Choriceros.

“I played in Mexico eight or nine years,” Owens said. “I was on three championship teams, two with Jaurez and one with Camargo.”

Owens’ mother still lives in Salisbury, so he still gets back occasionally.

Owens’ greatest joy now comes from his family and from working with the youngsters at Street Cred Sports Training. He’s proud to be part of El Paso basketball’s history, as well its present and future.

One of his fellow trainers at Street Cred is Kareem Cager, the son of Willie Cager, one of the Texas Western Miners of 1966.

“We make sure Willie Cager speaks at all our camps,” Owens said. “And the kids here are always playing ‘Glory Road.’ ”