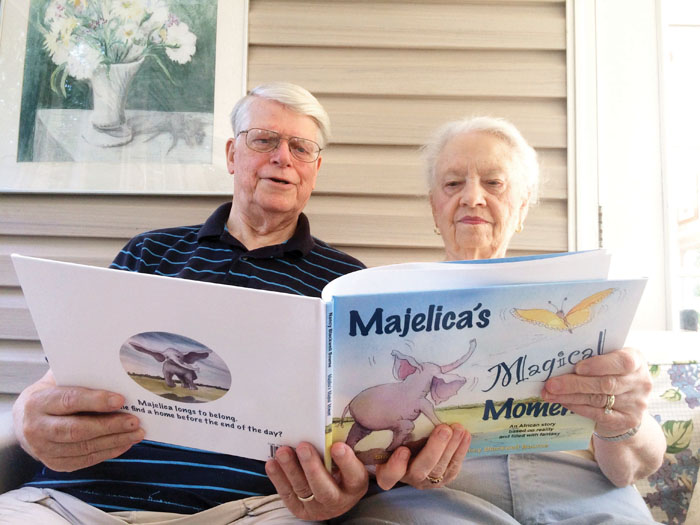 Early one morning in a faraway place

An elephant stirred as the sun hit her face.

“Time to get going! We need to move fast.

At the watering hole, we don’t want to be last.”

In 1998, David Bourne witnessed a baby elephant get separated from its herd at a South African watering hole. In 2020, his mom has completed a book about the experience — and yes, it has a happy ending.

“He came home and told me all about it, and I thought I would love for my grandchildren to know this story,” says Nancy Bourne, who lives with her husband, Terry Agner, in Arden. The fact that their seven grandchildren now range in age from 15 to 22 did not stop her.

She always thought she’d get to it “tomorrow,” she admits. “Then I realized my tomorrows were getting shorter.”

So one day, while waiting for Terry at the doctor’s office, she wrote a poem about the little elephant. She modeled it after the poem, “The Night Before Christmas,” because she likes its rhythm.

After she wrote the poem, she knew she could illustrate it. Nancy has been painting watercolors for more than 50 years. She is a member with excellent and former president of the South Carolina Watermedia Society, where she lived before she and Terry were married in 1992. She took up the cello in 1994, and took piano as a child, yet was a chemistry major in college.

She took a course at Asheville-Buncombe Community College, where she learned that forced poetry is out. But she’d already written her poem. Rewrite it in prose, she was told.

“But a children’s story has to have solace,” Nancy notes. “It should end in comfort.”

Turns out the instructor loved her story, and in the end, Nancy, decided to keep it as-is and self-publish.

Everyone she’d consulted thought children would like it, he says. He told her, “I think you ought to just go with what you have.”

“Majelica’s Magical Moment” is available on amazon.com, barnesandnoble.com, or directly from Nancy on Facebook if you would like a signed copy — or two.

When Majelica gets separated from her herd, she spends the day with all kinds of animals — a butterfly, a zebra, a crocodile, a giraffe, and more — who are willing to help her. In the end, she’s reunited with her own family — a happy ending all around.

“Now all of a sudden I’ve nothing to fear.

What matters to me is my family is here!”

Nancy did take some creative license with the story, her son says. For instance, the baby elephant wasn’t gone from its family for too long.

“It could have been 15 minutes or it could have been two hours,” he says, “but we were concerned that the baby elephant got left. It made an impression on me, for sure, when I came home. The baby did go up to some other animals as if to say, ‘Where’s my family?’ It was cute and heartbreaking to watch this baby.”

David notes that his mom has been talking about this project for years. She gave a Shutterfly to him and his sister Anna for Christmas as a trial run.

In coming up with Majelica’s name, Nancy wanted a name that sounded like “elephant.” She saw a similar name, then made up her own. She created 31 original watercolors to go along with scenes in the poem. She took pictures of the watercolors, then designed the pages on an iPad Pro.

She’s learned a lot along the way, Terry says. “It’s an interesting project and it’s a story that really happened.”

“Publishing, even self-publishing, is a multi-step process,” Nancy says. “It is not for somebody who thinks it is glamorous. I did not do this to make money. I just did it for my grandchildren and my family — and for all the Agners in Salisbury!”

“I’m happy that she is doing it and that her artwork can get a wider distribution,” Terry says.

Incidentally, Nancy did take her instructor’s advice, and wrote another book, this time in prose. It’s called “The Line, The Dot, and the Zero,” and will be illustrated in red, blue, and black.

Nancy doesn’t want to give too much of the plot away, but she does allow,” When they get together, they can really accomplish stuff.”

Just like Nancy and her friends and family who helped her bring Majelica to life.