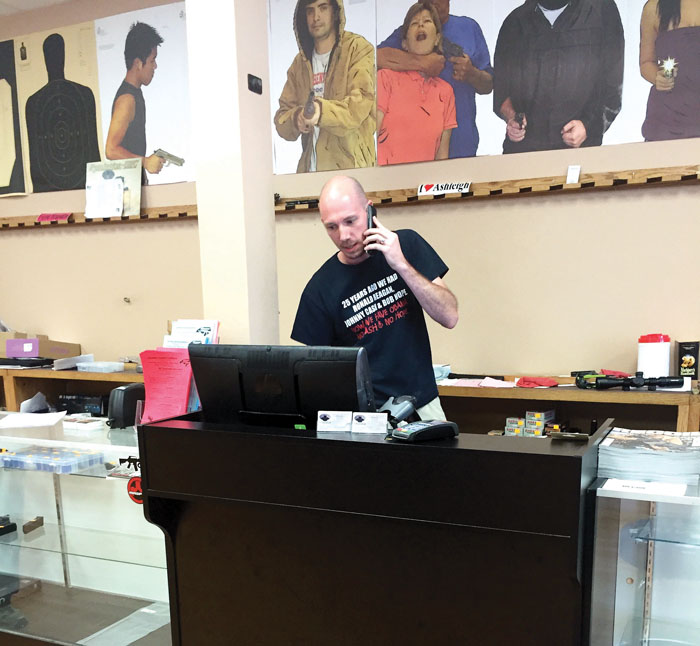 SALISBURY — The purchase of gun permits has easily reached record levels this year.

In fact, the number issued since June tops the number of permits issued in all of 2019, according to data provided by the Rowan County Sheriff’s Office. There were 1,453 total purchase permits in June bringing the total thus far for the year to 4,644 permits. The number includes walk-ins in both the Salisbury location of the sheriff’s office, the Landis office as well as online applications. In April, there were 751. In, May there were 713.

Rowan Sheriff Kevin Auten said, “2020 will easily become the top year for the issuance of purchase permits in our history.”

He added that the permits his office issued in the first 10 days of July 2020 brings the total to 5,014 for the year, which would be the third-highest year. And that’s with five and a half months left.

“Other years, we have seen spikes when there are mass shootings. I believe this year the virus started the spike and the riots and destruction seen on television drove the spike even higher,” Auten said.

Brandon Cupp, gunsmith and owner of Cerberus Firearms in Granite Quarry, said he believes the increase stems from fear.

“I see a lot of fear. People are buying out of fear. It’s the uncertainty of what’s going on, he said. “The coronavirus started the initial buying.”

Cupp said his customers are of the mindset that they need to be prepared. He likened it to the possible fear of being stuck at home during the pandemic and people who fear someone stealing what they have.

“And now other tensions have fueled that fear even more,” Cupp said.

He told a story of one of his customers’ reasons for buying a gun. As she relayed to Cupp when picking up her firearm, she was at the intersection of North Long and East Innes streets when a man trying to sell her a flower vase tried to open her door. The woman was fearful and tried to wave the man off. A man in the vehicle behind her had a shotgun, jumped out and scared the guy off. The woman told Cupp that ordeal was why she purchased a gun.

But Cupp said guns and ammunition are in short supply right now.

“The inventory is depleted. I can’t order guns,” Cupp said.

He said the shortage of guns in the result of a trickle-down effect. As the industry began to shut down because of COVID-19, businesses that normally produced guns were not open or switching gears to the products they more regularly produced. In March and April — at the height of the initial shut down in North Carolina — there was a notable increase in gun sales and ammunition. Gun sales picked up, Cupp said, because people were apprehensive and they bought shotguns, rifles, AR-15s and handguns.

When Remington Arms in New York closed its plant to make way for the manufacturing of needed hospital supplies, the gun industry felt the effects, Cupp said.

“We won’t see any Remington firearms until December,” he said.

Also, other companies have a hand in making gun parts that are operating at a reduced capacity or are temporarily shuttered.

Right now, he said, some people are paying top dollar for guns and ammunition as the price soars. Cupp said a 9mm box of ammunition would typically cost $10 or $11 for a box of 300 rounds. Now, that same ammunition is about $30 a box.

“As a gun shop, there’s nothing I can order. The only guns available to order will cost me well over $1,000,” Cupp said.

Most of his customers are not going to pay those types of prices, Cupp said.

The only thing left are long rifles, target pistols and, on the opposite end of the spectrum, high-end and semi-custom handguns that he said are “ridiculously priced” at around $2,700, he said.