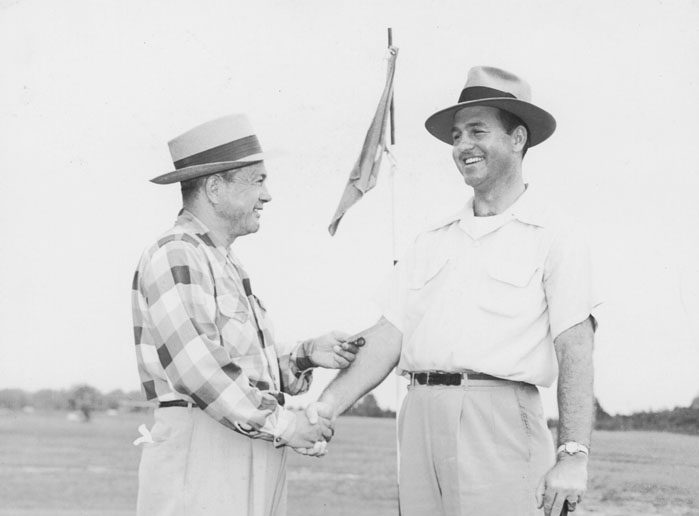 SALISBURY — Maybe it was inevitable that James Madison Monroe would grow up to be president — of the Class of 1932 at Salisbury’s Boyden High.

Monroe, who answered to “Jim,” was a commanding presence throughout his long life. That was true in school, in the mills and in service clubs. It was true on World War II battlefields. It was true on golf courses.

Monroe was the founder of the amateur match play tournament that is held annually at Corbin Hills, the tournament we now know as the Horace Billings Rowan Amateur.

Golf edged football and auto racing as the greatest sporting passion for Billings. He played the game frequently and well and made an annual pilgrimage to report on The Masters. He headed to Augusta every spring for five decades.

In the Depression years, a local amateur golf championship was staged at Brookdale in Salisbury. A few months after he graduated from high school, Monroe defeated Pat Jones for the 1932 crown. Scheduled for 36 holes, 38 were needed to decide that epic match. As the victor, Monroe was awarded a handsome cup and a leather billfold. Jones had to settle for a pen and pencil set.

There was a celebrated matchup  in 1940 when Monroe tangled with one of the legends of Rowan golf, A.D. Dorsett, for the city championship at the American Legion Club course. It was scheduled for 36 holes, but Monroe had locked it up after 33. Monroe made an eagle after mashing his tee shot to the green on a 244-yard par-4. He also rolled in a 50-foot putt on the 32nd hole. That was the backbreaker. Monroe, it was said, had a magic putter.

Monroe was 12-up with 11 holes to play in a dominant 1942 championship match.

In 1943, he was crowned as Salisbury’s finest golfer for the fifth straight year. He was 29 then and a Cannon Mills superintendent. He’d been granted a deferment from military service in World War II, but he felt guilty and wanted to do his part. He enlisted in the Army in November, 1943, was sent to Camp Wheeler in Georgia and was fighting in Europe by the summer of 1944. He played in a major golf tournament in France after the war in Europe was won. He returned home with an armload of medals. He was stationed overseas for 1 year, 5 months and 24 days and honorably discharged on Dec. 14, 1945.

The last city-wide golf championship for many decades was staged at the American Legion Club in 1947.

But Monroe always was an exceptional golfer. The story goes that when McCanless was still a nine-hole course, he played two nines in 28-32 — 60.

After a drought of 32 years — in 1979 — Monroe believed the time was right for an individual match play championship tournament to make a comeback, and he believed Corbin Hills, which had opened in 1956, was the right venue. It was a course where challenging tee and pin placements could provide an excellent test for even the best Rowan golfers.

Rowan County golf was booming in 1979, with numerous major four-ball events. Besides the prestigious Labor Day affair at the Country Club of Salisbury, there were massive turnouts for four-ball tourneys at Foxwood and McCanless.  There were at least 19 flights in the Grady B.McCanless Four-Ball that summer.

There were accomplished golfers everywhere. In the Foxwood Four-Ball Championship, Ed Rabon Jr. managed to outshine his famed partner Harry Welch in an amazing display of skill. In the championship match, Rabon made four birdies — and two eagles.

Monroe promoted the new tournament (limited to golfers with 8 handicaps or better) and would direct it.Marquee names signed up for what was billed as the Rowan Amateur. The top 32 after a qualifying round would be seeded and would advance to match play.

Qualifying in 1979 was conducted over a marathon, 11-day stretch from July 26-Aug. 5, probably because McCanless Four-Ball matches were in progress as July melted into August.

Sam Gealy, notable high school basketball coach as well as golfer, shot 2-under 70 to pace qualifying for that first Rowan Amateur, along with John Frazier III, who had just won the individual championship at the Country Club. Frazier’s 70 was the stuff of legends. He made a quadruple bogey on the first hole. Then he was 6-under over the remaining 17.

If you didn’t shoot 78, you didn’t qualify. Mallory McDaniel, a 21-year-old who was playing at UNC Charlotte, barely got in. He qualified with a 77.

A Hollywood-flavored script unfolded, as favorites and top qualifiers toppled like dominoes in match play.

The last two men standing for the 36-hole championship match on Aug. 12 were McDaniel and Manny Brunson, a South Carolina sophomore who had been McDaniel’s high school teammate at West Rowan.

McDaniel and Brunson were Four-Ball partners, who often played great together. They’d won the Grady B. McCanless Four-Ball as teammates in 1977 and 1978.

After a rain delay of about an hour at the start added to the tension, everyone expected the 36-hole championship match to be tight.

“McDaniel is a true champion,” Monroe declared in 1979. “I don’t think any amateur golfer in Rowan could have beaten him today.”

Not long after that, Brunson bounced back. He and McDaniel would join forces to win the Labor Day Four-Ball Tournament.

The summer of 1979 held incredible sports stories, some tragic, some magic. New York Yankees catcher Thurman Munson was killed in a plane crash. The Yankees flew to Ohio for the funeral, then returned to New York to play the Baltimore Orioles in a nationally televised Monday game. Bobby Murcer, one of the eulegists at Munson’s funeral, had his most emotional game — a three-run homer and a two-run double to personally beat the Orioles, 5-4. There weren’t many dry eyes in Yankee Stadium.

That was the summer Australian David Graham endured the most numbing collapse of his golfing career — a double bogey on the final regulation hole of the PGA Championship. Then Graham recovered to beat frequent runner-up Ben Crenshaw in the playoff.

In NASCAR, it was the summer of Dale Earnhardt, the brash charger from Kannapolis who won the Rookie of the Year Award.

Locally, a strong Rowan County American Legion team was an eyelash from winning a state championship. Rowan ran into a Virginia Tech-bound Hamlet youngster named Franklin Stubbs. Stubbs not only smacked extra-base hits, he was the winning pitcher in all four Hamlet victories. In a seven-game series, Stubbs hurled 29 1/3 innings.

Alsohat summer, a local golf tournament was born at Corbin Hills, thanks to the efforts of Jim Monroe.

In 1997, Corbin Hills placed a permanent marker on the course to honor Monroe for his contributions to the game of golf.

Pairings will be set by Thursday night for the 42nd annual Horace Billings Rowan Amateur, with match play starting on Friday. Nick Lyerly is the two-time defending champion. Michael Swaringen was the qualifying medalist with a 67.