Legends: Myers got the call to the Hall for Pfeiffer 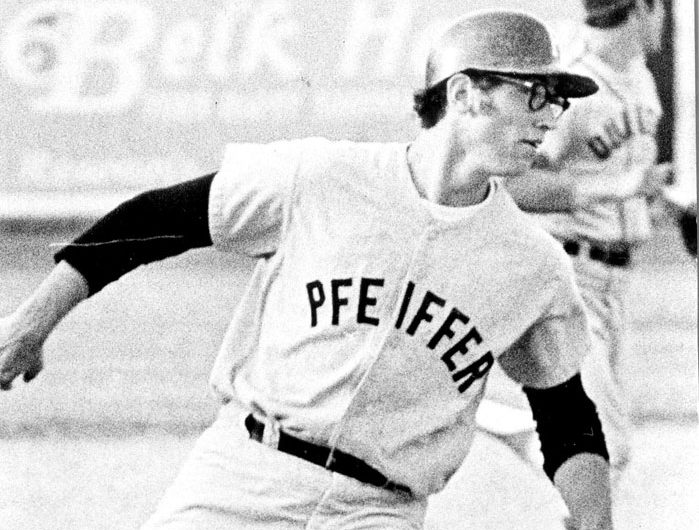 It took 44 years before the call came from the Pfeiffer Athletic Hall of Fame, but better late than never for the West Rowan graduate, who will turn 67 later this month. That call, any time it comes, is always a beautiful thing.

Myers, a two-way terror for the Falcons, was elected in 2019 and inducted earlier this year alongside long-time Pfeiffer men’s basketball coach Dave Davis and basketball brothers Rico and DeMario Grier, among others. A quick check of the record book reveals that Myers had every right to stand with elite  company.

Myers was a junior before he got a chance to shine for the West Rowan varsity, but he had quite a season in the spring of 1970. West won 13 games and finished second to East Rowan in the North Piedmont Conference. Myers went 7-1. He was the winning pitcher in West’s last two games — shutting out North Davidson, and then getting a win in relief against Mooresville before the Falcons packed up their uniforms. Only the league champ made the playoffs.

His senior season at West, Myers, who stood 6 feet tall and weighed 175 pounds, was only 4-5 on the mound, although he still had half of West’s wins.

He swung the bat well. He had four hits when the Falcons clobbered North Stanly. He had three hits in a 3-2 win against Mooresville in his final high school game.

He played on terrific, Ferebee-coached Legion teams during the summers of 1970 and 1971. In two seasons of American Legion ball there was plenty of offensive and defensive support. He was 19-3 and struck out 163 batters.

Rowan County’s 1971 team, which was sending Myers, Claude Bernhardt,  Johnny Yarbrough and Jack Moore to the mound, was 22-0 at one point. That team lost a game in a playoff series with Concord to end the streak, but then it won another 10 in a row to get to 32-1.

Myers won what Ferebee called the key game in that series, holding on in the ninth in Game 2 to beat Newell, 4-3. Myers gave up 10 hits and six walks, but Ferebee stuck with him, even after Newell loaded the bases with none out in the ninth.

When Rowan took the series with Newell, four games to one, it meant four straight Western championships for Ferebee and Rowan County.

Next was the state championship series against Wilmington, which always seemed to be the opponent for Rowan in that era.

Myers beat Wilmington twice — in a tight game Game 2 and in the Game 5 romp that clinched the state title.  In Game 5 at Newman Park, Myers, who played first base when he didn’t pitch, pounded five hits.

Rowan was runner-up in the Southeast Regional in Sumter, losing twice to Congaree, the South Carolina champs.

Myers’ took over Rowan’s second outing in the regional. That was the only regional game he pitched and he went the distance, striking out 11 in a 3-1 win against host Sumter. He also got the key hit of that game — a two-run double.

Myers knocked in three runs in a win against the Alabama state champs from Tuscaloosa. That program had won the national title in 1967.

Myers’ signing with Ferebee to play at Pfeiffer was announced late that summer.

Individually, his 1974 season was his best one for the Falcons. He was 7-0 with a 1.67 ERA, while batting .367 and leading the team in RBIs. He was voted the Carolinas Conference Player of the Year.

Pfeiffer was ranked second nationally after winning 20 of its first 23 games, but finished 29-9.

In storybook fashion, Myers’ college career finished up in Salisbury. The 1975 Carolinas Conference Tournament and the four-team District 26 Tournament were both played at Newman Park.

Myers homered in Pfeiffer’s first game of the Carolinas Confernce Tournament, but the Falcons fell 4-3 to Guilford.

Myers was the winning pitcher against Elon and also banged out four hits.

In a 6-5 victory against Guilford, he walloped the game-deciding three-run homer in the seventh.

Myers’ college career wrapped up on May 19, 1975. High Point was a frequent obstacle for Pfeiffer getting out of District 26 and reaching the national tournament, and that was the case once again. High Point ended Pfeiffer’s season, 11-9. Otis Foster hit three homers in that game for the Panthers.

Elliott joins his father as winner of NASCAR’s All-Star…