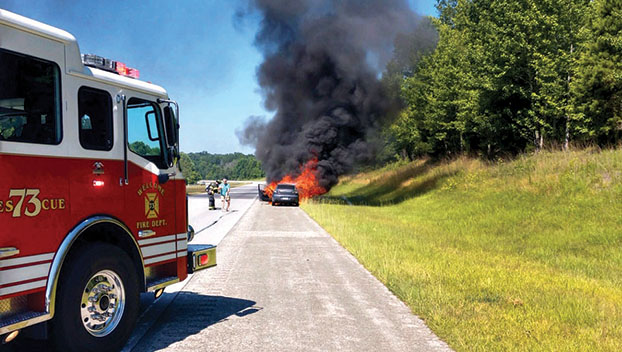 Rowan County Sheriff’s Detective Josh Simmons helped pull a woman from this vehicle just before it caught fire while on Interstate 285. Shortly after Rowan County based trooper Justin Stone came upon the scene and further assisted them out of the way before the car caught fire. Submitted photo

DAVIDSON COUNTY— A Rowan sheriff’s detective and N.C. state trooper say they were just doing their jobs when they assisted an older woman trapped in her burning car this week.

On Tuesday morning, Detective Joshua Simmons was on his way to interview someone at Wake Forest Baptist Medical Center. He was driving on U.S. 52 near exit 92 in Davidson County when he noticed a small, gray car smoking on the shoulder of the opposite lane.

Simmons, who has been with the sheriff’s office since 2015, didn’t hesitate as he pulled into the grassy median, crossed a cable median barrier and approached the car.

“I noticed smoke coming from the front of it. You could see the flames; the glow of the fire underneath the front end of the car going around the hood,” he said.

As he got closer, the fire became more intense. Simmons crossed over the southbound traffic lanes in order to reach the car. He did not immediately know someone was inside until he got closer.

“The fire was growing from the time I got my car stopped. Maybe a few minutes passed until the whole front half of the car was engulfed,” Simmons said.

Upon reaching the car, the woman told him the door handle was broken and she could not get out. He was able to open the door from the outside and help her out of the car, as she wasn’t able to get out on her own.

It was more of instinct to stop, Simmons said.

“The way I was raised, you take care of people. I didn’t know who was in the car,” he said. “It didn’t matter who they were. They needed help. That’s what I signed up to do to, help anybody,” he said.

Not long after, Trooper Justin Stone, was conducting speed enforcement on Interstate 285, which is merged with U.S. 52 in Davidson County, when a motorist drove up to say a vehicle ahead of him that was on fire. Around the same time, Salisbury officials dispatched Stone to that area for the vehicle fire. When Stone arrived, Simmons was leading the woman out of the car.

“I got her and the detective to come back to my car. As I got them back to my patrol car, the car began to be engulfed in flames and eventually started to blow up,” Stone said.

Stone said his priority was making sure the woman and Simmons were safe. So he ushered them back out of harm’s way.  The Welcome Fire Department responded to the scene.

“I’m just glad everybody was OK and nobody was hurt,” Stone said.

The woman said she borrowed the car and she’d only been driving it for about five minutes when she heard a noise. The next thing she knew, it was on fire.

Tell us what you think about public school plans…