Rowan ranks 73 out of 100 in state for overall health, says State of the County Health Report 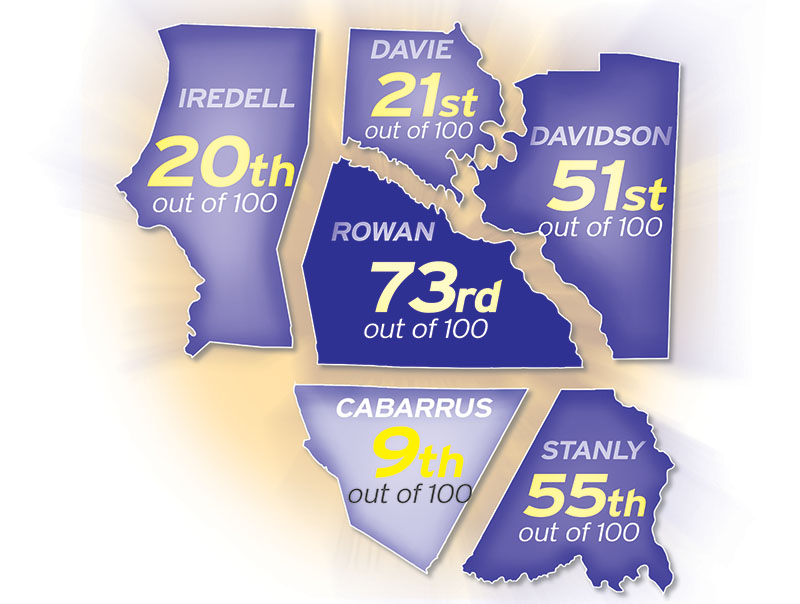 Rowan County ranks 73rd out of 100 North Carolina counties in overall health, according to the State of the County Health Report. Graphic by Andy Mooney, Salisbury Post.

SALISBURY — Alyssa Harris, the county’s community health manager, presented some grim statistics Monday that show a decrease in the county’s overall health ranking and highlighted priorities for 2020 after discussing the 2019 State of the County Health Report with county commissioners.

The purpose of presenting the report to the board, Harris said, is to increase awareness of health issues relevant to the county in hopes of bringing attention to areas in need in policy development and enactment, as well as environmental changes and partnerships for initiatives and resources that contribute to an overall healthier, stronger community.

Harris said the county currently ranks 73 out of all 100 counties in the state, with a rank of 100 being the worst. The ranking marks a significant drop from the year prior, when Rowan was 59.

Commissioner Craig Pierce said Rowan County will never rank better in health than other surrounding counties since Rowan County has a major VA system. He asked if veteran statistics can be pulled out to show a “true picture,” but Harris said including veterans is important if they’re part of the county.

“We have to remember we want them to be healthy and account the entire community,” she said.

Edds also said hearing that the county moved down to 73 is “disappointing” and “frustrating” because officials have made strides to improve the economy, particularly with economic development projects and training programs available to students.

A total of 38% of adults in the county, 22.5% of children and 28.4% of high-school-aged individuals are considered obese. The state ranks 19th in obesity across the nation.

Commissioner Judy Klusman asked about the rate of childhood obesity before the pandemic compared to right now. Harris said there has been a 30-pound increase among some patients who visited a medical clinic in January and have returned for a visit since. She added that health professionals are aware that childhood obesity can also lead to mental health issues.

Klusman said hearing that much of an increase “blew me away.” Edds followed up with “holy cow.”

To help combat obesity, one program, Adventure Rowan, seeks to connect children aged 5-11 in the 95th percentile of height and weight to participate in activities hosted by Salisbury Parks and Recreation, Healthy Rowan and the YMCA. In 2019, the program hosted 42 sessions, with an average of nine patients participating at each session. Of the 28 participants the county has data for, 89.3% were considered obese and 50% were severely obese. More than half were female, 70% were Hispanic and 30% were Black.

Additionally, the county health department partners with the Community Care Clinic of Rowan County to participate in the “Exercise is Medicine” initiative, which is a global program that encourages primary care providers to “prescribe” physical activity routines.

About 15% of youth are considered tobacco users in the county along with 23.5% of adults. The statewide goal for 2030 is to reduce the rate to 9% for youth using tobacco and 15% for adult tobacco users.

In 2018, 36 Rowan residents died of unintentional overdoses from opioids and 100 residents visited the emergency room following an opioid overdose. A total of 8.23 million opioid pills were dispensed in the county in 2018. There were 137 reported community naloxone overdose reversals. The county established a Substance Use Task Force, which is a coalition of community organizations and local government to fight substance overuse and misuse. And in 2019, the county health department established the Post-Overdose Response Team, known as PORT.

In 2019, the Health Department, Rowan County Sheriff’s Office, Youth Substance Use Prevention Rowan, municipal police departments, the Department of Social Services and Center for Prevention Services collected about 2,113 pounds of medication from 12 medication drop boxes and one takeback event. This amounts to an increase of about 898 pounds compared to 2018. Since beginning to collect medication in 2016, a total of 5,535 pounds has been collected, which amounts to approximately 5.03 million pills.

Life expectancy is often used to gauge overall health, Harris said, as well as take into account factors that influence health. The current life expectancy for those born between 2016-18 in Rowan County is 75.2. The Healthy NC 2030 goal is to increase that number to an average of 82 years.

Access to healthy foods continues to be a problem in the county, with 14% of the county considered “food insecure,” which means they either don’t eat enough so that they can conserve what they have or they don’t have access to healthy foods nearby. Harris said the Rowan Food and Farm Network has done a great job at getting more healthy foods out into the community, but that the county can do better, adding that “we know there is plenty of food” and food waste.

Harris along with commissioners noted that this year’s farmers market, located at the new Railwalk Pavilion, has been the most successful year yet, which is great news particularly during the time of a pandemic.

The four leading causes of death in the county are cancer, heart disease, stroke and chronic respiratory diseases like emphysema or COPD, which all can be prevented by eating well, being physically active, avoiding tobacco use and excessive drinking and getting regular health screenings.

Other health issues Harris said the county should “keep on the periphery” include teen pregnancies, sexually transmitted infections and health disparities among historically marginalized groups of people. The county currently ranks higher than the state’s number of cases for chlamydia, gonorrhea and Hepatitis C.