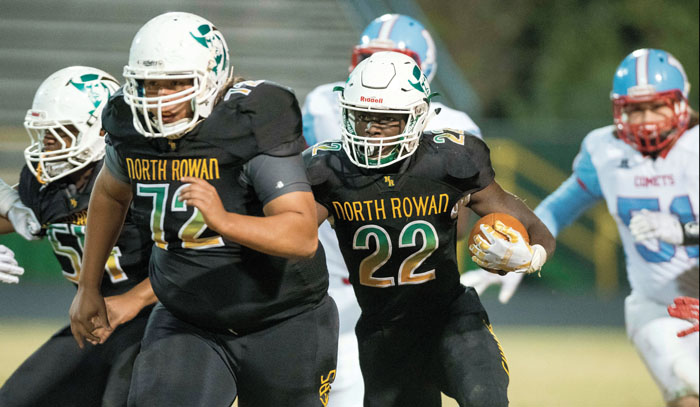 JON C. LAKEY / SALISBURY POST On Oct. 19, 2018, North Rowan’s Malcolm Wilson (22) follows behind Justin Hughes (72) as he carries the ball during a game against North Stanly.

SALISBURY — The Rowan-Salisbury Schools Board of Education opted to not to suspend athletic training against the recommendation of district administration on Monday.

The recommendation followed a wave of decisions across the state to suspend athletics or postpone the start of training from other districts. The board plans to revisit the issue next week.

“All of this changed today,” said Superintendent Lynn Moody, referencing rapid changes at other school districts.

Moody said most districts did not opt to bring athletes back for training as early as RSS did, adding many were waiting for Gov. Roy Cooper to make a decision. She said RSS coaches have been taking infection control seriously.

Associate Superintendent of Operations Anthony Vann said the rapid increase in the number of COVID-19 cases in the county during the past few weeks is alarming. On Saturday, the state had the highest number of new positives in a single day since the pandemic came to North Carolina.

Two board members, Jean Kennedy and Josh Wagner, were not present for the vote at the Monday meeting, but a majority of the board voted in favor of continuing athletic training anyway. Alisha Byrd-Clark was the only dissenting vote.

Board member Dean Hunter was the first to say the district should continue training for the time being, noting Rowan-Salisbury Schools is following guidelines.

Member Travis Allen said the board should keep things as normal as possible for kids as long as they were able to, noting athletic training is a way for them to get back in contact with the schools. Allen also said saying students are in contact with each other outside of training sessions anyway.

“I think we need to hold out as much as we can for our students,” Allen said.

Allen said Cooper, who is expected to make an announcement on the start of school today, will probably make the decision for the board before long anyway.

Board member Susan Cox voted in favor of the motion — to continue athletic training and revisit the vote later — with the caveat that she respects Moody’s emergency power to make the decision if needed. The board has granted Moody emergency powers to take certain actions after consulting with the board chair. Board attorney Ken Soo said canceling athletic training would fall within those powers.

Board Chair Kevin Jones suggested the board revisit the issue next week and simply let training continue for the time being.

Athletic training for fall and winter sports began in June and July respectively under state guidelines for infection control. Some sports have more restrictions than others. Golf can largely be played and trained for while following social distancing. Contact sports like football have serious restrictions on training.

Skepticism is mounting within the state and country at large as to whether fall athletic competition will be allowed this year. Wake County Schools has suspended its fall athletics, Cabarrus County is not opening athletics, Kannapolis City Schools is suspending its athletics and Mooresville City Schools is suspending as well. On the college level, COVID-19 outbreaks among athletes has raised concerns and prompted changes that include conference-only competition.

The district is also facing uncertainty over whether students will return to classes at the beginning of the coming semester. If Cooper makes the call to not return to classes immediately, schools could still reopen later in the year.