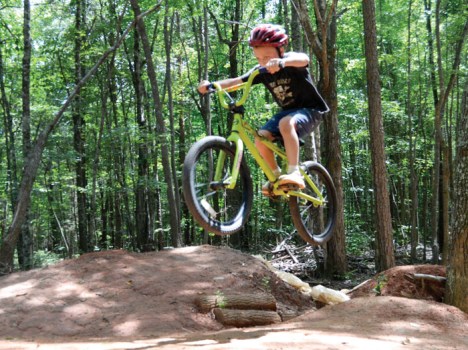 A biker takes off from a mound at the jump park in Community Park. Shavonne Potts/Salisbury Post File Photo 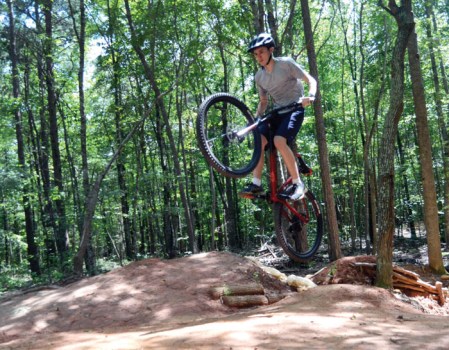 A.J. Flynn takes his turn on a trail at the Jump Park, located with Salisbury Community Park. Shavonne Potts/Salisbury Post 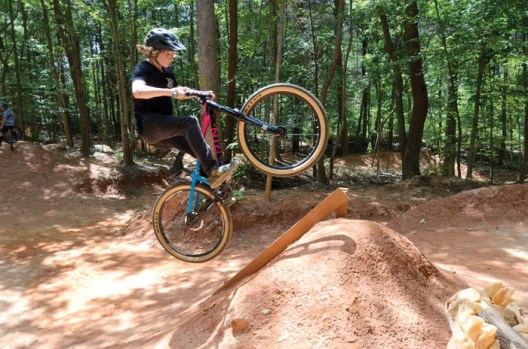 Connor Halpin does a jump at a mountain bike jump park within Salisbury Community Park. He and few others often go to newly created space. Shavonne Potts/Salisbury Post 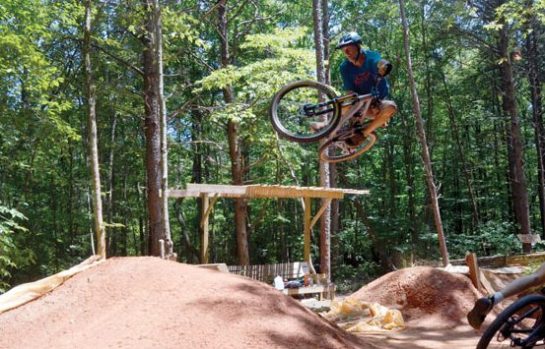 Paul Effinger who has been mountain biking for years created a jump park at Salisbury Community Park, located on Hurley School Road. He volunteered to raise funds to create the park. Shavonne Potts/Salisbury Post

SALISBURY — In January 2019, Paul Effinger pursued creating a jump line mountain bike at a location not far from his home. And when plans fell through, he set his sights elsewhere.

He, several friends and other volunteers have created a jump line mountain bike trail at Salisbury Community Park, located on Hurley School Road. The trail is off the beaten path, just beyond the park’s gravel parking lot, and nestled between the baseball field and the wood line.

Effinger, a former BMX racer who has been riding bikes for more than 40 years, said he had his son, Jonah, in mind when he decided to approach the city’s Parks and Recreation Department to see if he could build the jump line, which allows mountain bikers to catch some air and throw a few tricks.

More than a year ago, Effinger looked at trails on land behind his house. The landowner told him liability issues prevented use of the land but that Effinger could purchase it. That deal fell through and Effinger was on the hunt for another location.

It was around May 2019 when the actual work began.

“I wanted a place to ride where I where could build, have a good time, have all my friends over. Fortunately, the park and the city decided to let me do it,” he said.

The only part of the deal was that the city would not be liable for the trail. Effinger had to fund and build it himself.

Effinger connected with Skinny Wheels bike shop in downtown Salisbury, and the owner of the shop connected him with a trail builder.

Those trail builders helped with the development of the community park site. Some friends with heavy equipment assisted as well. Over a year, the beginnings of a mountain bike trail began to emerge. Effinger and volunteers donated time and funds to create the 1.5-mile jump line of the 20 acres that were made available.

Once the initial jumps were created, Effinger began to modify some of the mounds of dirt and it quickly morphed into a passion project and, perhaps, a slight obsession.

“Everybody wanted more. So I just started building everything by hand,” he said.

He continues to make modifications, sometimes at the suggestion of regular riders. He has plans to add more jumps, flow lines and more single-track or one-lane trails. The jump lines are for riders of all skill levels, Effinger said.

Effinger also used pallets and two-by-fours to create a sitting area. He obtained bamboo from a local awning shop to make an covering for the sitting area.

A short distance from the sitting area is a fort that Effinger created as a nod to Fort Fisher at Carolina Beach, where there is a Civil War stronghold fort of which he and his son were fond of. So he recreated one in Salisbury.

Connor Halpin, 15, has been riding bikes for about two or three years. And, Halpin said, the closest place he could go to find a jump line was Charlotte. Now, there’s a place in his hometown and he spends most Sundays at the jump park.

“It’s great to have a spot out here and not have to travel hours to get somewhere. It’s a pretty cool place to be,” he said.

He also volunteered to help build it.

Effinger estimates he’s seen the rider count double or triple since its inception with word-of-mouth spreading to riders from South Carolina, Virginia and throughout North Carolina including Winston-Salem, Greensboro, Asheville, and Charlotte.

He’s created a GoFundMe page to help with the cost of renting heavy equipment, including a backhoe needed to add jump lines and flow trails. The name of the page is Salisbury Community Park SCPMTB.