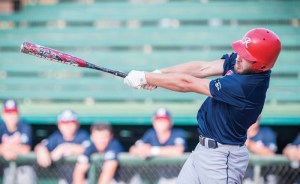 LEXINGTON — When Rowan County faced Lexington-Davidson pitcher Dylan Ward on opening night, Rowan didn’t do much offensively during his four innings, except for a solo homer by Cole Hales.

Rowan didn’t enjoy Ward’s stuff much on Sunday night, either. The East Davidson graduate isn’t a guy who is hyped and he’s headed to Division III Greensboro College, but he was the main reason the Warriors knocked off Rowan, 3-2, in an exciting NC3 baseball game at Holt-Moffitt Field.

Ward, who pitched into the ninth inning, is smart. There’s a reason he’s going to Greensboro on a Presidential Scholarship. He wisely used a generous strike zone to his advantage.

He spotted his fastball and got ahead of a lot of Rowan hitters with strike-one curveballs. Some aggressive Rowan hitters were off-stride from the third inning through the eighth. There was a stretch when Ward retired 18 of 19 batters.

Behind Ward, Lexington-Davidson fielders were magicians. They made remarkable plays. After a first-inning error, the Warriors were flawless — and then some.

The tone was set right away. In the top of the first, it looked like Ward’s night might be brief and it appeared his infielders might need to be added to the endangered species list. Rowan was dialed in. Charlie Klingler lined out to second. Hales lined out sharply to third. After a walk and an error extended the inning, Wayne Mize lashed a lineout to left. Game of inches. Rowan banged three balls squarely. None fell in. After that brush with disaster, Ward started settling in.

Bryson Wagner, usually a reliever, made his second start on the mound for Rowan and looked comfortable in that role. Control is normally the biggest test  for him, but he wasn’t walking anyone. Wagner can fire it, and he was getting strikeouts.

Lexington-Davidson executed for a single run in the bottom of the first. Levi Perrell bunted for a hit and stole second. Groundouts by Tanner Tesh and Seth Polen got him h0me.

Rowan got even in the third. Klingler singled, moved to second on a wild pitch, took third on Hales’ long flyball and scored on Jordan Goodine’s sac fly.

Then it was just Ward and Wagner mowing people down for a while.

Wagner, who had struck out six and was having his best performance of the summer, suddenly lost it with one out in the sixth. He plunked three straight batters. Scout Nichols, Rowan’s most frequently used reliever, came out of the bullpen and rescued him with a huge strikeout and a groundball. It stayed 1-all.

The bottom of the seventh proved decisive. Lexington-Davidson hadn’t been able to get a lead-off batter on base since the first inning, but Jarrett Murray got a base hit. After Nichols hit Mason Everhart with a pitch, Austin Leonard executed on a sacrifice bunt that moved two runners into scoring position and eliminated the possibility of a groundball double play.

Mattox Henderson replaced Nichols on the bump. Perrell lined a single just over the glove of Hales, Rowan’s  second baseman. That scored pinch-runner Brannon Williamson with the run that made it 2-1. Tesh’s sac fly made it 3-1.

Hales made his summer pitching debut with the bases loaded in the eighth and got a strikeout to end the inning and keep Rowan’s deficit at 3-1.

Ward, who made it through eight innings with 98 pitches and hadn’t allowed a hit since Dylan Driver’s double in the second inning, finally weakened and walked Goodine to start the ninth. Polen, who had been stationed in center field, replaced Ward on the mound.

Logan Rogers hit a flyball down the right-field line. Everhart was playing him in right-center, but he made the long gallop toward the line and came up with a sliding catch for the first out. That proved to be a massive play, as pinch-hitter Jake Harris singled. So did CP Pyle, and Rowan had the bases loaded. Fast pinch-runner Andrew Kennerly carried the go-ahead run at second base, so any sort of single to the outfield would’ve put Rowan in front.

Driver was next and has been hitting the ball as well as anyone Rowan has, but Perrell fielded his sharp groundball. Goodine scored, but Perrell  got the second out. Ryan Street was the last hope for Rowan. Third baseman Drew Rabon fielded his chopper and threw to first for the out that ended the game.

Rowan’s game scheduled for Monday against Garner was canceled, so Rowan isn’t scheduled to play again until Wednesday when Mount Airy is in town.

Lexington-Davidson will welcome Kannapolis on Wednesday.