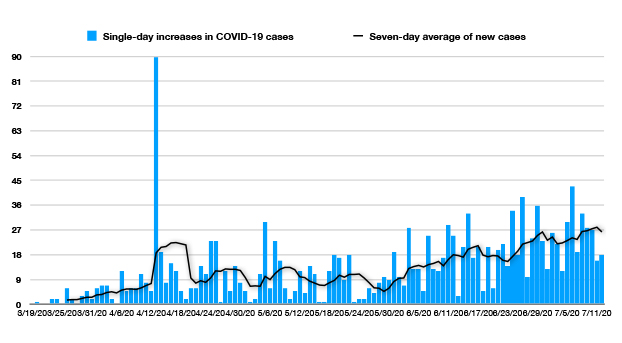 This chart shows the daily increases in positive tests and well as a seven day average of new tests. The large increase on the left side of the chart includes tests from the Citadel nursing home, which became the state's largest outbreak.

SALISBURY — Rowan County on Sunday reported 18 new positive COVID-19-related cases, a continuation of a trend in double-digit increases but lower than the county’s average increase over the previous seven days.

Statewide there have been 1,503 deaths reported out of 1,199,575 completed tests and 85,701 laboratory-confirmed tests. Like Rowan, the statewide number has been increasing more rapidly, too, with a record daily increase of 2,462 on Saturday and another large increase of 1,908 positives on Sunday. Even as the state has increase testing availability, the percentage of positive tests has remained relatively stable, around 10%.

As of Sunday, there have been a total of 45 COVID-19-related deaths in the county, with 328 currently positive cases out of 8,199 tests reported. Data shows 1,509 total positive patients and 231 positive patients at congregate living facilities.

A majority — 58 percent — of those who tested positive have been white, but Hispanic Rowan Countians continued to be disproportionately affected by the COVID-19 outbreak, 483 people or 32.01 percent of positive tests. Other demographics include 21.27 percent of people testing positive are labeled race unknown and 214 people or 14.18 percent were listed as “other.” That’s followed closely 13.25 percent reported as Black residents.

Those 18 years old up to 35 years old represent a plurality of people who have tested positive.

Rowan County says it is continuing to support North Carolina’s goal of increasing testing of people who may not currently have symptoms but may have been exposed to COVID-19. People can be tested at the following locations this week: