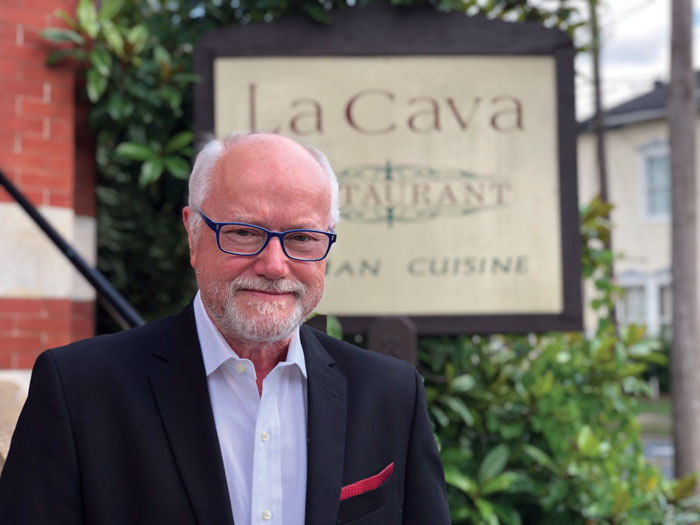 Natalie Anderson / Salisbury Post — La Cava restaurant owner Gianni Moscardini is the new Downtown Salisbury Inc. Board Chair after being involved with DSI for the last three years. He's hopeful for an "economic explosion" downtown over the next few years despite the COVID-19 pandemic.

SALISBURY — La Cava restaurant owner Gianni Moscardini says he’s excited to serve as the new Downtown Salisbury Inc. board chair for the year. And even amid a pandemic, he has a feeling “this town is on the verge of an economic explosion.”

Moscardini and living in the area for more than two decades, he’s ready to give back, bringing along his “range of understanding” from serving on multiple committees within the DSI. For the last two and a half years, Moscardini has served as the chair of Promotions Committee, which works to promote the downtown area to attract visitors and future development projects. He has also served on the Design and Master Plan committee, which focuses on the landscape of downtown, as well as the Economic Vitality Committee, which determines the driving forces attracting people to downtown Salisbury locations.

Now’s the time Moscardini feels he needs to volunteer his thoughts, hopes, strategies and know-how.

Moscardini is taking the reins from former board chair Whitney Wallace Williams, who served as chair for a year. He assumed the role on July 1, at the start of the 2020-21 fiscal year.

In a news release, Williams said, “Our organization, like almost every other organization globally, had to pivot to address this new reality. The DSI Board continues to strategize and develop new ideas for how best to support its stakeholders in our new normal. We are crystal clear and laser focused on the impacts of this pandemic on Main Street America.”

Looking ahead, Moscardini said, the board is currently putting together the vision and mission for the next five years, which includes possibly restructuring some areas. By 2023, the DSI plans to increase visitation and revenue at downtown businesses by 10%.

A long-term goal involves the master plan within the design committee, which aims to work with the city’s Community Planning Services Department for new streetscaping. On the to-do list as well is bringing the Empire Hotel project to completion.

Moscardini also said the DSI plans to develop a strategy to implement more technology for downtown businesses. DSI plans to support entrepreneurial opportunities for small businesses and start-ups by growing or expanding at least nine new businesses by June 2023, with a goal to make downtown the hub for technology, shopping and business in Rowan County.

Moscardini said there’s still a need for urban development with more residential spaces downtown. The goal is to increase downtown residents by 15% by 2023.

In an effort similar to the partnership among the Rowan Economic Development Commission, Chamber of Commerce and Tourism Development Authority to promote the county, DSI has began a campaign with the slogan “I choose downtown” to promote visiting and eating at downtown businesses and restaurants.

He emphasized the growth that has occurred downtown compared to how the area looked a few years ago, when it was a “dead zone.” He’s hopeful for the upcoming years and expects growth in the current downtown vacancies, particularly due to interest rates being so low during this time.

Moscardini said the current partnership with the city is great because it allows the DSI to have more access to various city departments, such as the Community Planning Services and Parks and Recreation departments.

And though he’ll serve a one-year term for now, Moscardini has the opportunity to serve two additional terms if he wishes.