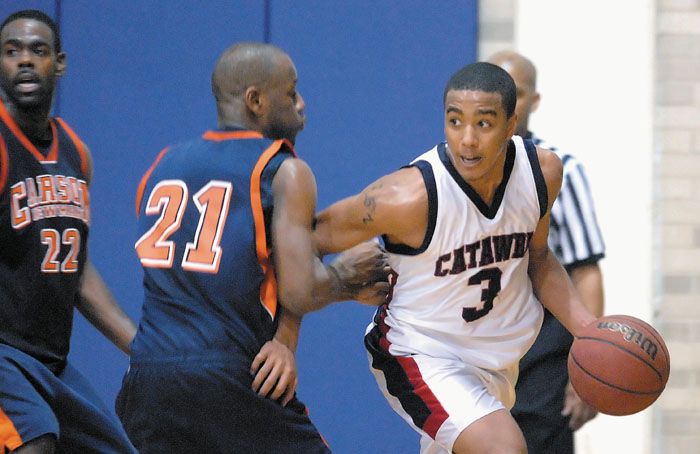 DURHAM — Brian Graves, holder of a masters degree and assistant coach and recruiting coordinator for North Carolina Central University, is eager to make his mark in Division I men’s basketball.

It’s been a winding journey for Graves, who turned 35 on Thursday.

“I can’t lie, most of the road was challenging,” Graves said. “I was raised by a single parent and spent a lot of years in low-income housing growing up. Fortunately, I had a strong mother (Traci) who gave me the support I needed. She believed in education and made sure I did what I needed to do in school. By the time I was 11 or 12, I knew basketball was my chance. Basketball was my ticket. My goal was a scholarship, to try to make college free.”

The growing-up years for Graves, who now has his name sprinkled all over the Catawba College record book, were in Newport News, Va. He went to Heritage High,  a mostly Black school where more than half of the students fell into the “economically disadvantaged” demographic. Athletics were a huge source of pride. The Heritage Hurricanes went 14-0 in football in 2000 and won a state title.

In the 2002-03 hoops season, Graves was the senior point guard for one of the state’s best teams. The signature game he took part in was a matchup of Heritage and arch-rival Warwick, the school from which Michael Vick had graduated five years earlier.

“It was sold out, No. 1 against No. 2 in the state, and it was a game that we won in three overtimes,” Graves said. “It’s still considered one of the classic games in that area. One thing I’ll never forget —  two Caucasians were standing at the top of the stairwell watching the game.”

One of them was Catawba assistant coach Bill Haggerty, who just died lst month. He recruited a number of outstanding players for Catawba and was there to see Graves, who turned out to be one of the finest point guards he ever landed.

“I knew a lot about Catawba,” Graves said. “Catawba practiced at Heritage High when they came to Newport News to play Apprentice School. Catawba had recruited Tevon Raikes from Heritage. Duke Phipps was another guy from Newport News. Duke was having a lot of success at Catawba.”

Demetrius “Duke” Phipps, from Newport News’ Woodside High, was a tough guard for the Catawba Indians. He’s still second on the Indians’ career steals list (behind new Salisbury High principal Marvin Moore) and scored 1,125 points in his career. He earned a degree and returned to Newport News as a coach and math teacher.

Graves’ freshman year at Catawba, he joined forces with Phipps, a senior. Phipps taught him the ropes.

That was a mostly dismal season for head coach Jim Baker’s young Indians, but Graves adjusted to college ball, played in every game and started 10. He averaged 6.3 points and 2.2 assists. Catawba won just four of 14 South Atlantic Conference games, but then the Indians shockingly won the conference tournament to grab the league’s automatic berth in the NCAA Division II Tournament.

“Coach Baker stressed to us that once the tournament started, everyone’s record was back to 0-0,” Graves said. “Duke and I got together, and we talked about taking a championship back home with us to Virginia.  That team banded together and finished strong.”

Graves made the All-SAC tourney squad, along with Phipps and Helgi Magnusson. After that success, Graves rarely looked back.  Catawba was 23-7, 22-8 and 22-11 the next three seasons. Catawba won SAC regular-season championships in Graves’ sophomore and senior seasons.

Graves’ sophomore season ended in the NCAA Division II Tournament with a 19-point effort against Virginia Union. Catawba lost that game, 85-81, to the eventual national champs.

“It was a great group of guys I got to play with, and we realized the team was bigger than any one of us,” Graves said. “I was always a win-first guy. I didn’t worry about stats. We had great scorers like Antonio Houston and Chris Wooldridge, and I got the ball to them. It was all about achieving and winning.”

While he didn’t dwell on stats, the 6-foot-2 Graves still piled them up. He made the All-SAC second team as a sophomore. He was first team as a junior and senior. He still ranks third all-time at Catawba in assists (600) and steals (179).  He also scored 1,387 points for the Indians.

There also was an emotional performance in the Senior Night win against Presbyterian that came four days earlier.

“My mom was there, my aunt was there, my high school coach was there,” Graves remembers. “That’s a five-hour trip, so it’s not like they got to come to every game. I wanted to play well for them.”

In another landmark game his senior year, Graves racked up 32 points and 12 assists in a 108-105 overtime win against Wingate at Goodman Gym.

Graves received his bachelor of science degree in sports management from Catawba in 2007.

He got his first opportunity to play professionally in Europe through the help of Catawba teammate Tim Verwimp, who came to the Indians from Germany.

Graves’ success in Europe opened the door for Wooldridge, another Catawba teammate, to join him overseas.

Graves played a season in the states in the Premier Basketball League for a team called the Vermont Frost Heaves.

“Coldest place on earth, 45 miles from Canada,” Graves said. “I was there for three months and I never saw the ground. There was always snow covering everything.”

Graves made a second trip to Germany for the 2009-10 season and played the best basketball of his life.

“My second year in Germany, I averaged 22 points and six assists,” Graves said. “I was actually much better in Germany than I ever was at Catawba. You’re a lot better player when you’re 23 or 24 than when you’re 19 or 20. I was stronger. I was more experienced. The game got easier.”

Graves broke loose for a 40-point game for the Elephants and also had a 30/10/10 triple double. He was an all-league player both seasons he played overseas.  He was so good that he helped the Elephants move up a classification in the German pro ranks.

“The biggest challenge in playing overseas is finding the right representation,” Graves said. “But after the season I had, there was some pretty decent money on the table. There were good offers.

But his wife was also pregnant with his son. So he had a decision to make.

He’d grown up in a single-parent household. He wanted to be there for his child.

“I decided to stay home and be a father,” Graves said. “I gave basketball up.”

His last fling as a player came with the Norfolk Tru Hope Trail Blazers in the Atlantic Coast Professional Basketball League. He was team MVP, made second-team all-league and scored 20 points in the ACPBL all-star game.

Graves began his coaching career, fittingly, back at Heritage, at the helm of the jayvee boys squad. He coached a championship team in 2011.

There was a day in 2012 when Baker called Graves to offer him a job on Catawba’s staff. Retirement was nearing for Haggerty, and Graves was the guy Baker wanted to follow Haggerty as his right-hand man on the Catawba bench. Graves got to learn from Haggerty for a while and was on the Catawba staff from 2012-15. He helped the Indians recruit recent stars such as Kijuan Arrington (from Newport News), Jameel Taylor and Jerrin Morrison.

Graves got an opportunity to be a head coach in the junior college ranks at Bryant & Stratton for the 2015-16 season.

“I got that job in September, so I didn’t get a chance to recruit anyone,” Graves said. “But we went 19-11. Our gym was a high school facility, so we didn’t get to practice until 7:30 at night. Those were some long days, but I embraced the grind.”

So Graves was in Division I faster than he’d anticipated. He was able to get his masters degree while he was at Hampton.

He’s been in demand since then and is considered an excellent recruiter. After two seasons at Hampton, he spent a year at Longwood.  The 2019-20 season was his first at North Carolina Central. The Eagles went 18-13, won the MEAC regular season with a 13-3 record and went undefeated at home.

Besides heading the recruiting efforts for the Eagles, Graves is in charge of the point guards and one-third of the scouting reports. He also does postgame film edits for practice sessions, so players can quickly see what they did right and wrong in the previous game.

It’s been a tough couple of months. Among other things, Haggerty’s death hit him hard.

“A lot of us that are still close friends from our Catawba days, and Coach Hag stayed in contact with us by text, even after he got sick,” Graves said.

Graves’ son, Brian Jr. (BJ) is 11 now and working hard at basketball. Graves has never regretted the decision to stay home with his family, a life-altering choice that meant making the transition from player to coach.

The other critical decision of Graves’ life was listening to  Haggerty’s recruiting pitch and seizing the opportunity Baker was offering at Catawba.

“That college decision is just so important for every young man and woman,” Graves said. “Everything I have, the degree, the master’s, a coaching career, a better life for my family — everything goes back to that decision.”

The goal now is to keep grinding for the opportunity to be a college head coach someday.

He won’t mind if that opportunity comes in Division II.

“That’s a level I’m very familiar with,” Graves said. “It’s pure. D-II kids aren’t thinking about how fast they can get to the NBA. They’re focused on developing as players for four years and getting a degree.”