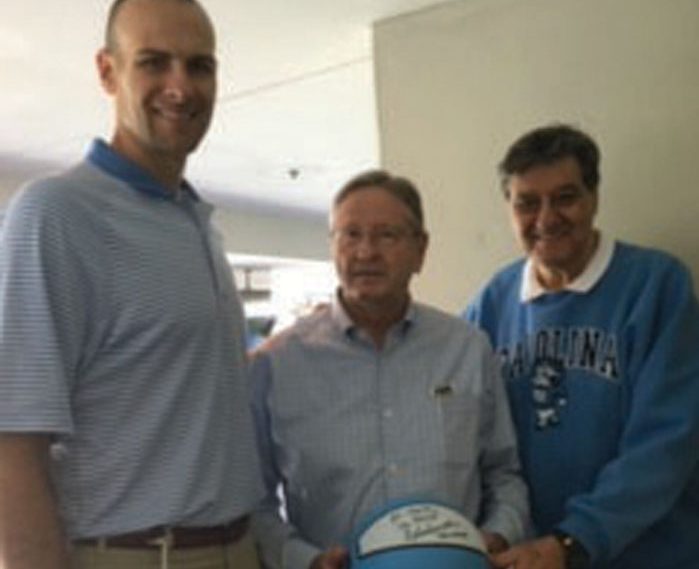 SALISBURY — Charlie Sowers, who turns 83 in November, is still on the job.

That doesn’t mean the financial advisor has done a shaky job of planning for retirement. All it means is that he enjoys going to work.

“Sure, I’m still working,” Sowers said. “What else is there to do?”

When he’s not at his desk or on the phone, he plays golf and takes long walks.

Sowers’ athletic glory days were in the 1950s.

In 1954-55, he played for the Derwood Huneycutt-coached “Durable Five” Boyden basketball squad. Sowers, who stood about 6-foot-3, was the big man on that team. His tasks included defending the 6-6 bruisers that Charlotte Central, Burlington and some of the other teams in the league put on the floor. Sowers was the one guy on his team who could dunk — but he says two things were required for that to happen.

Sowers talks modestly about his basketball days and nights.  He says basketball was the sport of last resort.

“I was tall and lanky, so football definitely wasn’t for me,” Sowers said. “I tried baseball, but those popups look like corkscrews coming down out of the sky. But basketball was different.  That was something you could work on by yourself.”

No less a judge of athletic talent than coach Joe Ferebee expressed doubts about Sowers’ future in hoops.

“He was the freshman coach at the high school and he was the one who put up the list of players who made the freshman team,” Sowers said. “My name was not on the list. I was cut. In freshman physical education class, Coach Joe told me, ‘You need to learn to play tennis and golf, something you can do the rest of your life.’ ”

There were no hard feelings, even after Sowers matured into a more than competent basketball player. Much later in their lives, Sowers would drive to Misenheimer to fetch Ferebee and transport him to Boyden reunions.

Sowers wasn’t on the Boyden varsity as a sophomore in the 1952-53 season, although a couple of his classmates — Tom Kiger and Roscoe Gudger — were. That was a good Boyden squad led by Johnnie Crouch and Dan Smiley. Boyden, always the smallest school in the league, managed an 11-10 overall record and was 8-6 in the 3A Western Conference.

Sowers did make Huneycutt’s squad as a junior, averaging 3.6 points for a team led by Kiger and Crouch. That season was disastrous for the Yellow Jackets — 4-15 overall and 1-13 in the conference. Boyden’s lone win in the eight-team league came against Gastonia.

But 1954-55, the season of the “Durable Five,” was a different story. Boyden (12-8, 7-7) returned to being very competitive. Kiger and junior Eddie Goodnight combined for nearly 30 points per game. Sowers had to be one of the most improved players in the state. He averaged 11.2 points.

“Kiger was All-State that season and Goodnight was All-State the next one,” Sowers said. “As you can imagine, with two All-States on the team, most of my points came from rebounds. The goal was always 10 points.”

Sowers wishes statisticians had tracked rebounds as diligently as they did points. He had a bundle of boards.

There was a jump ball at the beginning of each quarter. That was a lot of possessions. Sowers handled those important duties.

Sowers also was the man who threw the ball inbounds to one of the guards, then ran down the floor to set up in the post.

“I has to run the length of the floor every time,” Sowers said. “The guards just had to run foul line to foul line.”

Greensboro owned second place in the league with an 8-2 record when the Whirlies made a Feb. 9 trip to Salisbury for what would be a major upset.  That’s the night Sowers, Goodnight, Gudger and the Kiger twins (Tom and John) went the distance, with no subs, in a stirring 66-64 triumph that earned them lasting fame from the Post’s Horace Billings as the “Durable Five.” Tom Kiger made the decisive free throws. Sowers made two immense ones himself with about a minute to go. Sowers jokes that Huneycutt put his head in his hands as soon as Sowers was fouled.

But he made them.

That game was played on a Wednesday.

Just two days later, on Friday, the 11th, Boyden and the Whirlies would square off in the rematch in Greensboro’s gym.

The remarkable thing about the second meeting was that it was played as the preliminary for an Atlantic Coast Conference contest between Virginia and the University of North Carolina. Neither school was a power in the ACC that season — Maryland, N.C. State and Duke were the league’s top three. UNC was in the middle of the pack, while Virginia was somewhat worse.

Still, an ACC game in a high school gym?

The rematch with Greensboro didn’t go smoothly for Boyden. Lawrence McRanie scored 27 points for the revenge-minded Whirlies to lead a 63-50 victory. Tom Kiger scored 20 for Boyden. Sowers had 12.

Revenge also would be taken in the ACC contest.

Coach Frank McGuire’s Tar Heels, led by junior Jerry Vayda and sophomore Lennie Rosenbluth, had lit up Virginia a month earlier at home in Woollen Gym, but the Cavaliers held Rosenbluth to 22 and romped in the rematch, 98-73. It was a history-making night for Virginia, the night Buzzy Wilkinson surpassed 2,000 career points. He needed 24 against the  Tar Heels for 2,000. He got 34.

Wilkinson averaged 32.1 points that season for coach Bus Male and was second in the nation in scoring.

It was just one of those nights for the Tar Heels — and for Boyden —  but Sowers held on to the memory. He saved the modest game program that was distributed.

The Tar Heels would go on to bigger and better things in the years that followed. The 1955-56 team added Pete Brennan, Tommy Kearns, Joe Quigg and Bob Cunningham, and with Rosenbluth averaging  26.7 points and 11.5 rebounds, they went 18-5 and took second place in the ACC.

As every UNC fan knows, the 1956-57 team was considerably better, the ACC’s first championship team. The Tar Heels were 32-0, with two triple overtime victories in the Final Four.

The championship game was 54-53 in Kansas City, Mo., against a Kansas team led by Wilt Chamberlain. The 6-foot-5 Rosenbluth fouled out near the end of regulation in the Kansas game, but for the season, he averaged 28 points. He scored 895 points that season and was the ACC Player of the Year, Most Outstanding Player of the Final Four and national player of the year.

Like Sowers, Rosenbluth got cut from high school teams as a kid growing up in The Bronx. He turned 87 this year. He was the sixth pick in the NBA draft in 1957, but he lasted just two years in the league. He became a coach. One of his pupils in Florida was Chris Corchiani, who became a great point guard at N.C. State.

After that setback to Greensboro High before the Tar Heels took the floor, Sowers’ senior high school basketball season wound down quickly. There was a loss to Charlotte Central in the last home game in Boyden’s old gym that officially eliminated Boyden from any postseason hopes. Then there was the season finale — an impressive win at R.J. Reynolds that included a 37-point outburst by Tom Kiger. Sowers scored 13.

Sowers’ career high came in one of the city vs. county all-star games that were popular in that era. Playing for the city all-stars, Sowers poured in 28 points against a county team led by Granite Quarry’s Jay Ritchie, who would go on to pitch in the major leagues.

“Those were fun days and I still think about them a lot,” Sowers said.

Sowers went on to UNC and made the freshman basketball team for the 1955-56 season. That meant he got to practice with players like Rosenbluth and Brennan. He got to know them well.

In a perfect world, Sowers might have gotten to play a reserve role on the national champs of 1956-57, but an injury interrupted his basketball career.

He did contribute to the track and field program during his time at UNC.

He competed in the sprints and hurdles.

“I wasn’t that great, but I have a medal from a meet we competed in down in Florida,” Sowers said.

He got to line up against Duke’s Dave Sime, who was considered the world’s fastest human in his 1950s heyday and held six world records in hurdles and sprints at one point. Sime passed away at 79 in 2016. One of his grandchildren, Carolina Panthers back Christian McCaffrey, also has unusual speed.

Sowers also got to compete against North Carolina Central’s Lee Calhoun, who won gold medals in the 110-meter high hurdles in the 1956 and 1960 Olympics. Sowers has a nice story about that matchup.

“The Raleigh newspaper ran a sequence of three photos from that race,” Sowers said. “In the first frame I’m ahead of Lee. The second frame, I’m behind him. The third frame, you see Lee and you can still sort of see my shadow.”

After his college days, Sowers played on a YMCA men’s basketball all-star team headed up by Bill Hinckley. His teammates included Goodnight.

They played a home game against the Raleigh YMCA, and Sowers got to take on Bob MacGillivray, one of the heroes of N.C. State’s 1958 Dixie Classic  victories against Cincinnati (with Oscar Robertson) and Michigan State at Reynolds Coliseum. Cincinatti was ranked second nationally, while N.C. State was fourth. A few days after the Dixie Classic, No. 1 Kentucky lost to Vanderbilt, and Everett Case’s N.C. State squad ascended to the No. 1 ranking for the first time.

“With time running out, we were either tied or a point behind,” Sowers recalls.  “They were shooting a foul shot and missed.  I got the rebound and passed it off to Goodnight. He dribbled the length of the court and took a shot from the right side of the goal.  It came off the left side. I got the rebound and put it up.  It hit the rim, then the backboard.  Then the buzzer sounded — game over.  Then the ball fell through the rim and we won the game.  I looked up in the balcony of the gym and there stood none other than the Pfeiffer athletic director Joe Ferebee.”

Sowers turned out to be pretty good in basketball, after all.

In November of 2015,  Sowers was recognized at a reunion in one of the Kenan Stadium suites at the UNC-Duke football game.

Rosenbluth was present, and Sowers gave him a copy of that 1955 game program he saved from that long-ago doubleheader when Boyden High and UNC played on the same floor on the same night.

Rosenbluth and Eric Montross, one of the stars of UNC’s 1993 national championship team that won the title against Michigan’s “Fab Five” in New Orleans, signed a UNC basketball for Sowers.

It’s become a treasured keepsake for him.

He keeps it in his office. It brings a smile whenever he sees it.

Just one more reason to keep going to work.