Josh Bergeron: Is ‘Fame’ an angel or something else? 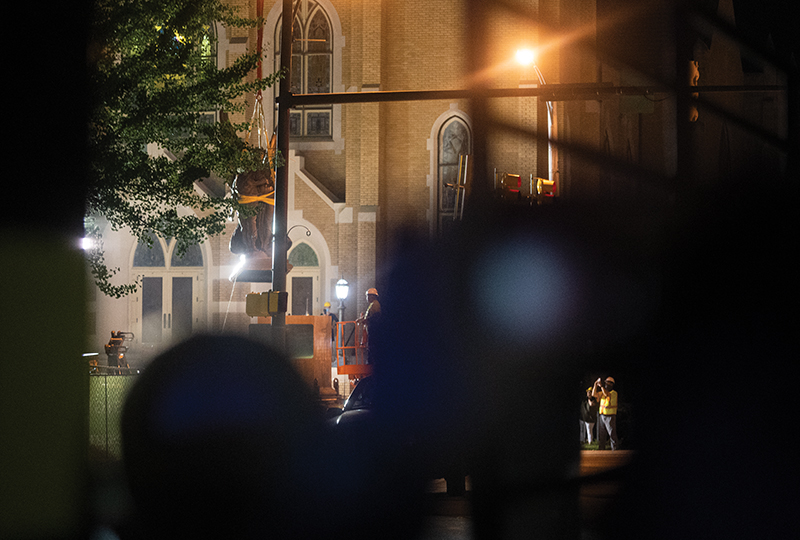 Josh Bergeron / Salisbury Post - The top of the ‘Fame’ Confederate monument is lifted from its base Monday night as a small crowd of people look on. The crowd cheered as the statue was removed.

Is “Fame” an angel, pagan goddess, winged figure from Greek mythology, Greek muse or something else?

The Post has written all manner of descriptions about what “Fame” — the winged figure holding up a soldier — portrays. For years, the Post called it “Salisbury’s Angel of Fame.” In 1991, a Catawba College professor named Daniel Brown set the record straight by saying angels don’t have names like “Fame.” The winged figure must be a muse or “Winged Victory.” Maybe the statue’s name should actually be Glory, a 1991 Salisbury Post editorial posited.

When the statue was removed this week after the Salisbury City Council and Robert F. Hoke Chapter of the United Daughters of the Confederacy signed an agreement to do so, the Associated Press, an international wire news service, called “Fame” an angel. Many TV news outlets did, too.

Similar to the Post’s archives and recent news reports, a wide swath of the public sees “Fame” as an angel.

Among the many calls and emails we’ve received since the City Council voted to removed the Confederate statue, one person wrote, “Winged muse????????? You secular jerks. It’s an ANGEL.”

There are many folks in Salisbury who say it’s not an angel, and they readily say “Fame” is Pheme, a figure from Greek mythology known for spreading gossip and rumors as well as the personification of fame and renown.

Gary Freeze, a historian and retired Catawba College professor, says “Fame” is clearly intended to be the Greek figure known as Pheme or Fama. But “Fame” looks angelic to passersby and sits in a city where Christianity is the predominant faith.

“I think that ‘Fame’ is a classic example that beauty is in the eye of the beholder,” Freeze said.

Libraries, including the University of North Carolina archives, aren’t easy to access now because of COVID-19 restrictions. But Freeze said there is a clear link in a 1912 speech from John S. Henderson — a lawyer and politician credited with founding rural free mail delivery — that “Fame” was meant to be Pheme or Fama rather than an angel. The speech was given during a Confederate Memorial Day gathering at the monument.

“He said very clearly that the idea is that it was the goddess of contention … the idea that the concept of the Lost Cause was a contention, meaning that they contended they were right,” Freeze said, recalling the Henderson documents. “He clearly is linking it to Greek philosophy far more than Christian perception.”

Freeze said the evolution of “Fame” to an angel would be a natural progression of Lost Cause thinking — that the cause of the Confederacy was just and heroic.

The top part of Salisbury’s Confederate monument was sculpted by Frederic Wellington Ruckstuhl, who was born in France and grew up in the United States. When created in 1901, it was known as Gloria Victis, or glory to the vanquished.

A Salisbury resident, Mrs. M.W. Shober, viewed Gloria Victis and another, sister statue that eventually found a home in Baltimore (It was removed from public view in 2017). A notable difference, the Baltimore statue pictures a Confederate soldier holding a flag, while Salisbury’s is holding a gun. Baltimore’s was also produced in New York while Salisbury’s was made in Belgium. Both ended up at Ruckstuhl’s studio in New York. The base of Salisbury’s monument, meanwhile, came from the Balfour company in Granite Quarry.

Is there a correct interpretation of the winged figure on Salisbury’s Confederate monument?

Rowan Museum Director Aaron Kepley said people can take any interpretation they like, but context from when the piece was built is important “to those who wish to go beyond the basic symbol.”

“It is factually incorrect to say that ‘Fame’ is an angel or that it is in anyway connected to the Judeo-Christian tradition as some fervently believe,” Kepley said. “Is that the county-wide understanding though? Yes, just like how people all over believe there is a horse buried under the Session House near the old Presbyterian Bell Tower or how the little windows at the top of the Old Stone House were used as port holes to fire at Native Americans. Both are incorrect interpretations and easily disproved, but there is a factual meaning and a symbolic/popular meaning to objects and items that are ingrained in our public memory.”

Individuals may form deep, emotional connections and meanings from statues, buildings and art, but they also must be willing to understand there’s often an actual meaning behind the piece that could be at odds with long-held perceptions, Kepley said.

No, it doesn’t make a major difference, Freeze said as he offered his own question. If someone takes a pantheistic viewpoint — that is, everything comes from God — what’s the difference between an angel and a Greek winged figure, he asked.

“It is a legitimate culturalization,” Freeze said.