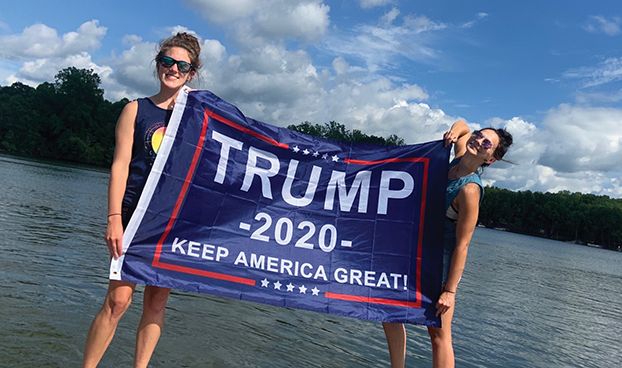 Photo submitted - Anna Garrison, left, and Genny Duncan, right, pose for a photo with a Trump 2020 flag. The pair are helping organize a boat parade on July 18 on High Rock Lake.

SALISBURY — Politics can get crazy, says Genny Duncan. Sometimes people just need to have fun with it.

Duncan and longtime friend Anna Garrison are helping organize a Trump boat parade Saturday on High Rock Lake that they expect to draw hundreds of people. The parade is scheduled to start in the area of Tamarac Marina at 11 a.m. with the national anthem, a speech on behalf of President Donald Trump and a prayer.

“With all the negative things that have been going on in America, we wanted to do something in a positive and fun way,” Garrison said. “We’re not really wanting to make it a huge political statement.”

The pair got the inspiration from similar boat parades that have occurred across the nation. And as they saw other events, they wondered whether the same was possible in Rowan County, where Trump in 2016 won Rowan County with 66.51% of the vote, or 42,810 votes.

“The culture in Rowan County, personally to me, there are a lot of people who are Trump supporters,” Garrison said. “We started seeing it blowing up on social media and seeing all these boats in the water, boats wrapped in Trump things and America’d out. We started messaging each other back and forth and said, ‘Maybe we should just do it.’ ”

That they’ve lived near or enjoyed sunny days on the lake helped propel the idea forward, too.

The pair didn’t have high expectations for the turnout initially, but as of Friday there were more than 400 people who said they were going on the event’s Facebook page and more than 1,100 interested.

The friends said being outside is the best way to “beat the coronavirus” and that being outdoors is beneficial amid the COVID-19 outbreak.

“I think with all of the concerns about COVID-19, being outside and being on the water, people will be able to practice social distancing,” Garrison said.

As for logistics for preparing for the parade, Garrison and Duncan are encouraging people to dock your boat, if possible, to allow more room for those who don’t and to be considerate of others when trying to find a parking spot. There are plans for three lead boats with a line of three behind them and lines of four for the remainder of the parade participants. Jet skis will line up outside of the boats.

For more information about the event, visit the page on Facebook: facebook.com/hrltrump2020.