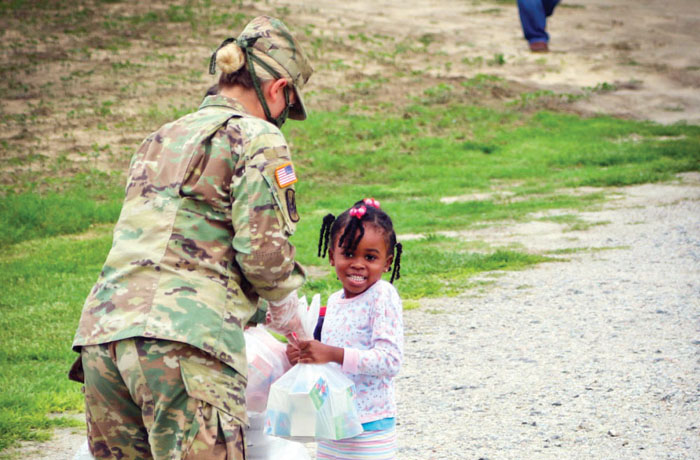 Spc. Amber Cohen, assigned to the 449th Theatre Aviation Brigade, based in Salisbury, distributes meals. The meals were prepared at Elizabethtown Middle School and then given to the citizens in Bladen County. U.S. Army National Guard photo by Spc. Hannah Tarkelly, 382nd Public Affairs Detachment/Released

SALISBURY — For more than 120 days, the N.C. National Guard has been on duty supporting state health organizations and citizens in providing COVID-19 relief efforts during the pandemic.

That work includes Guardsmen based in Salisbury. The aviation battalion that belongs to the 449th Theater Aviation Brigade, an Army National Guard group based at the Mid-Carolina Regional Airport, has delivered meals to students in southeastern North Carolina and served at food banks in the western part of the state, said Maj. Ellis Parks.

In late May, the unit distributed meals that were prepared at the Elizabethtown Middle School and given to the citizens in Bladen County. The Guard worked with North Carolina Emergency Management, N.C. Department of Health and Human Services and local food banks to help support COVID-19 relief efforts.

Guardsmen, along with some school personnel, packed breakfast and lunch meals, loaded them onto waiting buses and delivered them to the community.

“It’s a different, fulfilling piece of the Army. I was able to experience the active side in going overseas, but it means so much more to me to actually be here and know that people need stuff here in the United States and not just overseas so we’re able to do that here,” said Spc. Amber Cohen in a video interview.

Cohen is assigned to the Salisbury unit and part of the group that served meals in Bladen County.

She said people in the community have been able to see the work the National Guard does.

“Seeing the Guard come in and help out in this manner as part of humanitarian help — feeding people, integrating with children, integrating with staff, it has given people a totally different view of what the National Guard is and what they represent,” said Bladen County Schools Superintendent Robert Taylor.

Jamaal Dunham, a principal in Bladen County, thanked the soldiers, he said, because they stepped in and “provided our district the opportunity to support children’s natural and healthy eating habits, therefore we’re able to instruct them on a greater level.”

Altogether, the Guard served over 235,000 meals to children.

Sgt. Sha-teisa Sharpe, also a teacher, is one of those soldiers who sorted and packaged food for distribution at the Inter-Faith Food Shuttle in Durham.

“It’s amazing to be able to assist where needed,” she said. “Selfless service is one of our Army values; we want to make sure we can portray that to the community.” 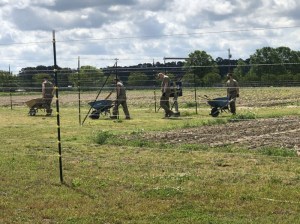 North Carolina Army National Guard Soldiers assigned to the 1-130 Attack Reconnaissance Battalion, 449th Theater Aviation Brigade use wheel barrels to move soil and mulch during a farming day at the Inter-Faith Food Shuttle in Raleigh, NC, April 29, 2020. The Soldiers are assisting in harvesting and planting food due to volunteers not being able to help during the COVID-19 pandemic. Photo by Maj. Ellis J. Parks, North Carolina Army National Guard Public Affairs

Some members of the National Guard, assigned to the 1-130 Attack Reconnaissance Battalion, 449th Theater Aviation Brigade, assisted in harvesting and planting food in Raleigh because volunteers were not able to help during the pandemic, Ellis said. A group of soldiers moved soil and mulch during a farming day at the Inter-Faith Food Shuttle in Raleigh in late April.

The Guardsmen have driven 146,000 miles to deliver 6 million pounds of cargo, too.