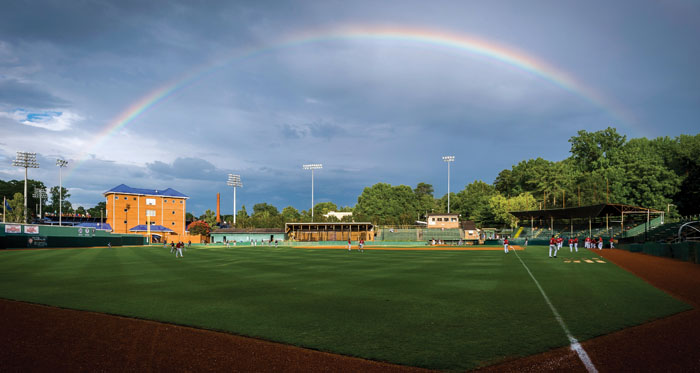 A rainbow appears over Newman Park before the NC3 baseball game between Rowan County and Kannapolis in 2020. Photo Credit: Sean Meyers

SALISBURY — After a shaky start, Rowan County bounced back from an ugly loss to Mocksville and pounded Kannapolis, 17-8, in NC3 baseball played on Wednesday at soggy Newman Park.

A 33-minute weather delay prior to the start of the game and a delay of about 15 minutes in the bottom of the fifth helped make it a long night at the park. The game ended shortly before 11 p.m.

The difference-maker for Rowan (12-2, 3-1) was relief pitcher Chase Shoaf, who shut Kannapolis down in the fifth, sixth and seventh innings as his teammates took control.

Rogers and Wagner had run-scoring singles and Zeb Burns hit a sacrifice fly in the third for a 7-4 Rowan lead.

Kannapolis put together a four-run fourth to inch back in front, 8-7, but a string of walks allowed Rowan to take a 9-8 lead in the bottom of the inning.

Then Shoaf went to work in the fifth, and Kannapolis’ offense stopped, while Rowan’s didn’t.

Rowan put the game away with a five-run seventh to lead 17-8. Rowan nearly won via the 10-run-rule, but couldn’t get that 18th run home from third.

Burns got Kannapolis out in the eighth. Kaleb Burleyson came in to get the final out with the bases full in the ninth.

Grady and Michael Specht had two hits for Kannapolis.

Rowan sent Henderson, winner Scout Nichols, Shoaf, Burns and Burleyson to the mound. Nichols was in the right place at the right time for the win. He got Kannapolis out in the top of the fourth, right before Rowan took the lead for good in the bottom half.

Rowan got 14 hits with Rogers collecting three and Charlie Klingler, Jordan Goodine, Pyle and Wagner getting two each.