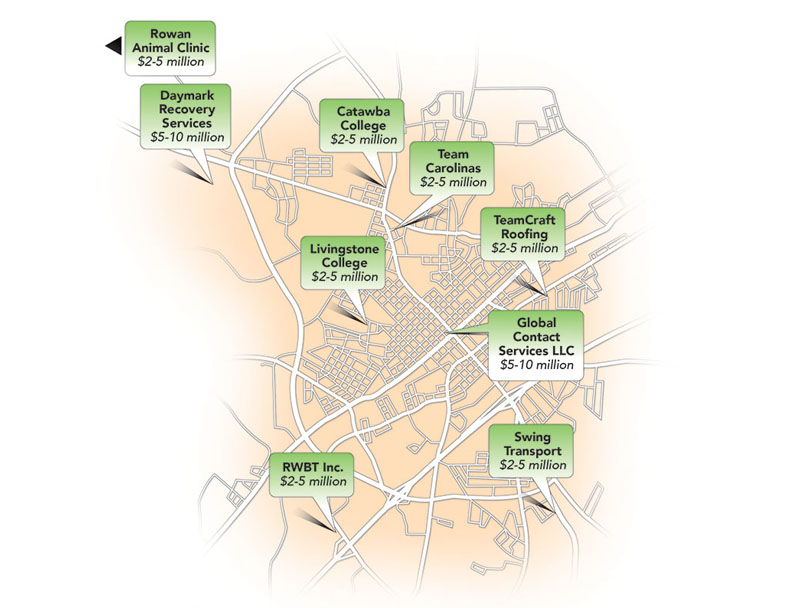 Graphic by Andy Mooney / Salisbury Post Map showing some local businesses that received at least $2 million from paycheck protection loans. The Small Business Administration released loan information publicly on Monday, providing a range rather than a specific amount for loans over $150,000. Locations are from addresses released with dates. View a full map online at bit.ly/rowanppp .

SALISBURY — A total of 15,822 jobs were supported or retained during the COVID-19 pandemic as nearly 1,500 businesses in Rowan County and Kannapolis received funding from the Paycheck Protection Program.

On Monday, the U.S. Small Business Administration, along with the U.S. Treasury Department, released detailed information regarding all 4.9 million loans obtained from the Paycheck Protection Program. The program was funded from the CARES Act relief package and included $350 billion in loans for businesses with 500 employees or less in the first wave of funding as well as another $310 billion in the second wave.

The loans were authorized to be used for payroll expenses, employee benefits, rent, utilities and mortgage payments. The program provides loan forgiveness to businesses if employers can maintain their payroll for eight weeks.

The SBA also stated Monday that nearly 75% of all loans nationwide were for more than $150,000. For businesses that received less than that, their name and address was not disclosed in the data.

The two largest loans in the county were for Daymark Recovery Services, located on Statesville Boulevard, and Global Contact Services, located on South Main Street. Both loans were between $5 million and $10 million, which is the highest loan range. There were 500 jobs supported or retained at each business.

Both Catawba College and Livingstone College as well as Rowan Animal Clinic were among businesses receiving loans within the range of $2 million to $5 million.

The SBA reports that approximately 75% of the loans don’t include demographic information because the lenders didn’t disclose that information. Only two of the businesses in Rowan County and Kannapolis that received more than $150,000 identified themselves as being owned by women — Grayson O Company in Kannapolis, and Ben Mynatt Nissan in Salisbury.

None of the businesses receiving more than $150,000 identified their business as being owned by a person of color. Only one business, Haskell’s Hardware Inc. in Landis, identified its business as veteran-owned.

Of the businesses that received less than $150,000 in Rowan County and Kannapolis, 27 loans were identified as being owned by women, and 129 said they were owned by men. A total of 10 loans went to business owners who were Asian. Four were Black. Four were Hispanic. Additionally, 12 of those loans were for veteran-owned businesses.

Being granted the funds doesn’t automatically mean the loans are forgiven. All PPP loans are subject to SBA review, and all loans over $2 million will automatically be reviewed.

Some businesses in Rowan County and Kannapolis applied for PPP funding on behalf of employees who are based elsewhere.

Salisbury Newsmedia LLC, which includes the Clemmons Courier and the Davie County Enterprise-Record, received a loan of $543,400. The loan is listed with businesses based in Tuscaloosa, Alabama.

In a news release, U.S. Treasury Secretary Steven T. Mnuchin said the PPP loans supported more than 51 million jobs and more than 80% of all small business employees across the nation, who he called the “drivers of economic growth in our country.” He also said the average loan size was approximately $100,000.

To view a full screen version of the map below of local data from the Paycheck Protection Act’s loans, visit bit.ly/rowanppp.

The map shows loans to Rowan County and Kannapolis businesses from the Small Business Administration’s Paycheck Protection Plan. Click on the markers for each loan to see more detailed data. A darker shade of green indicates a higher loan amount. On a smartphone, tap on the marker to select an address and then tap on the address at the bottom of your screen to see additional information about the loan recipient.