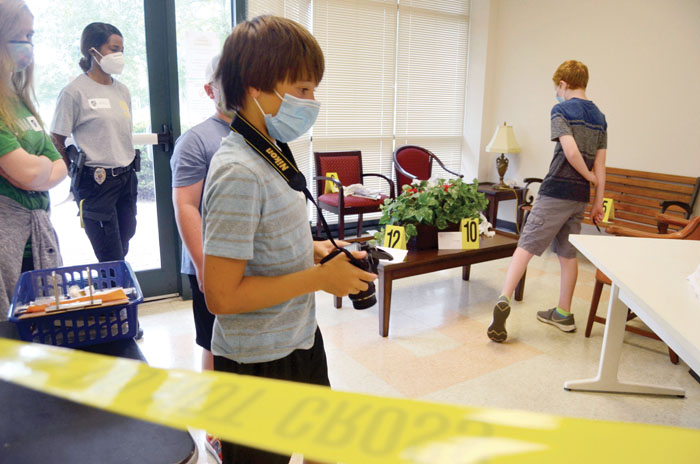 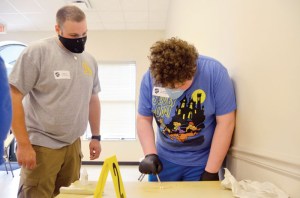 Salisbury police Detective Jay Basinger looks on as Crime Scene camper Conner Emmert swabs a spot on a table to test for blood. The officers placed synthetic blood for the campers to uncover. Shavonne Potts/Salisbury Post

SALISBURY — It’s been three months since friends Callen Batts, Phineas Mixson and Owen Hoffner saw each other in person because of the COVID-19 pandemic.

On Wednesday the trio reunited for the Salisbury Police Department’s crime scene camp.

This year’s camp was altered from the 30-plus attendees in 2019 to just 10 groups of three. The first camp was this week; the other two sessions will convene in two weeks. Campers gathered at the Park Avenue Community Center.

For three hours, campers learned how to lift fingerprints from objects, identify synthetic blood using detection tools and even solved a crime using methods similar to those in the board game Clue and with elements of an escape room.

The camp facilitators were detectives Victoria Young and Jay Basinger as well as Sgt. Jennifer Moreau.

Callen said there was instant happiness and laughter as he was able to be among his friends. The three attend Mount Ulla Elementary School together.

“I liked being with my friends and figuring out detective work,” Callen said.

His favorite parts of the camp were uncovering fingerprints each camper left on a glass door and looking for “blood stains” using Blue Star, a product similar to Luminol that is used to uncover “hidden” blood stains. The group used synthetic blood, Basinger said.

Callen’s father, Charles Batts, who arrived just before camp ended for the day, said this was an opportunity for his son and the other campers to get out of the house since the start of the pandemic. He said Callen has been around his immediate family, but not seen his close friends in a few months.

The camp was a chance for them to “eat lunch and have some social interaction,” Batts said.

It was a bonus that the camp was being offered for free.

“Hats off to the Salisbury Police Department,” Batts said.

Conner Emmert, 14, said he had fun and wants to someday become a law enforcement officer.

Zach Hollifield, 12, said he wanted to sign up for the camp and liked being able to lift fingerprints and reveal blood.

Alexia said she once had aspirations of a career in law enforcement, but is now leaning toward becoming an astronaut.

Detectives Young and Basinger created a scavenger hunt of sorts for the campers that led them to solve a crime. Young said she wanted to make it fun but also help the campers understand how law enforcement works.

She provided envelopes with clues that, once solved, would lead them to the second “location.” The campers had to keep records, take a swab of a fake blood stains, take crime scene photos and find evidence. The detectives hid items in a room at the community center, including salt that stood in for cocaine and a butter knife that stood in place of a weapon. The campers also had to decipher notes using morse code.

The camp was made possible with a donation from the Blanche and Julian Robertson Foundation. In addition, donations were made by Food Lion’s Loss Prevention Department, a discount was provided by Domino’s Pizza and shirts were provided by Granite Knitwear. Each camper received a T-shirt.

All slots for the camps have been filled. Basinger said he hopes police will be able to have a larger gathering next year.