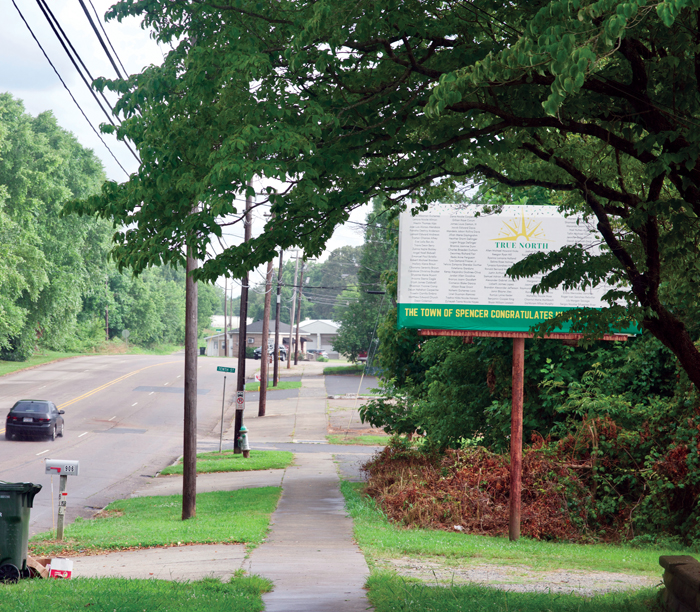 Carl Blankenship/Salisbury Post - The billboard is two-sided, so anyone coming into town from Salisbury or leaving in that direction can see it.

The $1,200 space on U.S. 29 on the way to downtown Spencer was the brainchild of NRHS alumnus Craig Thomas, who said the idea came to him one day when he drove past the billboard. It prompted him to get in touch with the owner and see what rate he could get for the town if it decided to go ahead with the purchase.

“I just thought it was something that would stand out,” Thomas said. “I’ve not seen it done anywhere.”

It was the Post who reached out to Thomas instead of him seeking recognition. Thomas said he watched as yard signs were given to graduates by county high schools as a way to recognize them. This, though, is a much larger and more visible recognition for them.

Thomas said he thought it would be difficult to fit all names of graduates on the small billboard, but he was pleasantly surprised when he saw the school had managed it.

“It worked out pretty well,” Thomas said, adding the billboard is a way for the community to show how much it appreciates the class of 2020.

Tiffany McDonald teaches at Isenberg Elementary School and is completing a principal internship at Knox Middle and NRHS. One of her passions is graphic design, and she was asked to work with the school to create the billboard. It was a three-day process and a new experience for McDonald working in all the elements the school wanted.

She owns a small business designing logos, graphics for T-shirts and websites; this was her first time working on a billboard project.

“It’s really cool for me because I’ve designed a couple logos, but for smaller things,” McDonald said. “Even though my name wasn’t attached to it, it didn’t matter to me because I knew I had designed it and it was out there.”

Spencer Interim Town Manager David Treme said the rate is competitive for the space. Aldermen thought it was a good idea, and the print for the billboard was provided by the high school.

“It’s sort of a lackluster year if you’re a high school graduate,” Treme said. “So they wanted to do something.”

High school graduates did not get a traditional graduation this year. In June, the district hosted virtual celebrations and drive-thru ceremonies, and is planning in-person ceremonies in October if the state lifts gathering restrictions by that point, but many students will not be able to attend or are unsure.

Treme said it was the least the town could do to recognize graduates from the only high school in town.

NHRS principal Meredith Williams said graduates have been appreciative of the project.