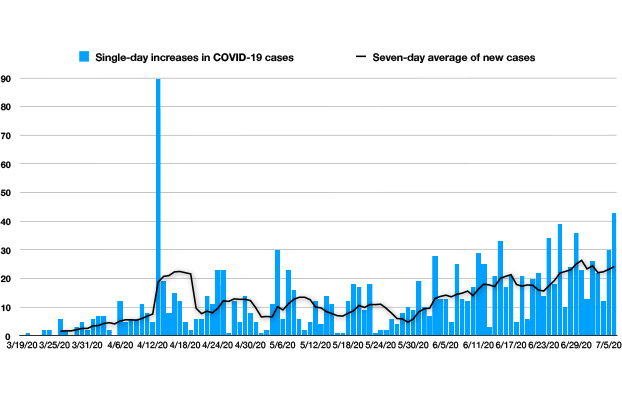 The highest increase was April 13 when the case count jumped by 90. Many of those cases on April 13 were residents of the Citadel nursing home, the largest COVID-19 outbreak in the state.

As of Monday, there are 1,368 confirmed positive cases of COVID-19 in Rowan County, a number that’s climbed at an increasing rate in recent weeks. In addition to Monday’s increase, there were 30 new cases reported Sunday, another one of the largest one-day increases.

Active cases include a number of people at Daimler’s truck manufacturing plant in Cleveland, where 13 employees have tested positive since mid-June, a Daimler spokesperson said.

That number is an increase of five since the company said June 26 that there were eight positives. Employees who came into contact with those who tested positive have been directed to quarantine at home.

The spokesperson said the plant is still using the same safety and prevention measures, including:

During the entire outbreak in Rowan, there have been 101 hospitalizations. The number of deaths in the county has remained the same for the previous week, 43.

Positives among young people have continued to increase, with 419 positive cases in the 18-35 range. That outpaces the next highest age group, 36-50, by 80 cases. The number of cases in people older than 65 has remained relatively level off 253. Still the least-infected age range overall, the number of people below 18 who have been infected sits at 130.

The 28147 ZIP code in Salisbury has the most infections, at 477, but unincorporated parts of the county have overtaken Salisbury, with 545 cases in the city and 588 outside of cities and towns. No other municipality in the county beside Kannapolis has more than 50 cases, but part of Kannapolis is in Cabarrus County.

By race, 60% of cases have occurred in white people, 13.74% in Black Rowan Countians and less than a percent, combined, in native Hawaiian or pacific islander, Asian and American Indians. A total of 25.44% of cases were listed as other or unkown

There have been 74,529 confirmed cases out of 1.05 million tests in the state, and 982 people are currently hospitalized due to the disease. The hospitalization number on Monday marked another record. However, only 81% of hospitals are reporting COVID-19 inpatients.