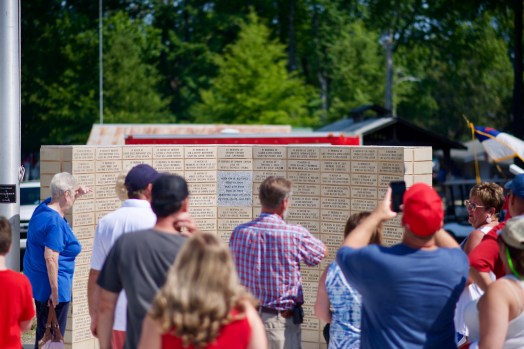 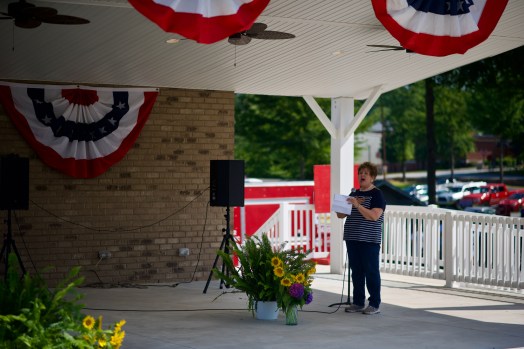 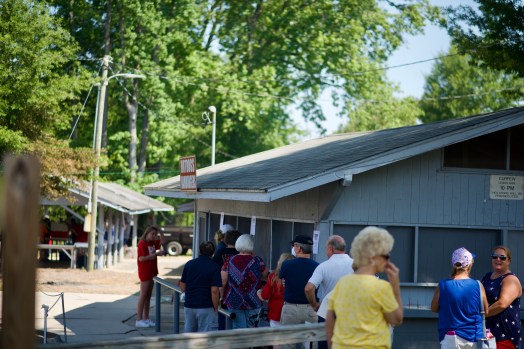 Carl Blankenship/Salisbury Post - The food was not organized by the committee, but friends of the town still came out to provide food.

FAITH – Fourth of July is a big deal in Faith — so much so that a pandemic couldn’t completely stop some small festivities from continuing this year.

The town’s festivities usually draws a few thousand people to the small town, but this year the committee in charge of organizing the events decided to cancel the parade amid the COVID-19 pandemic. The town has a community chorus on the Sunday before the Fourth which was canceled as well.

This year’s event was small and quiet. There was a brief program with an invocation, the pledge, the raising of the flag, the national anthem and a rendition of “The Star Spangled Banner.”

The crowd huddled in the shade during the hot morning near a stage by American Legion Post 327. The near-empty bleachers directly in front of the stage had the sun beating down on them. Every other row was marked off with caution tape just in case a larger crowd appeared.

The event also served as an unveiling for a new monument honoring veterans. The small wall at the shelter is filled with names of locals. The wall was built by the Faith Fourth of July Committee. Randall Barger, a Faith Fourth organizer and announcer at the event, said some of the people there may even find their own names on the wall.

Kaye Hirst is president of the local American Legion Auxiliary and on the Faith Fourth Committee. She was a longtime director of the Rowan County Museum until 2016 as well. Hirst said she was surprised by the turnout. But it certainly was not the same as the usual festivities. Hirst said she would normally work every night of the week leading up to the parade.

“It feels very different,” Hirst said. “There should be thousands and thousands of people out here, and we should be putting all the honchos on stage after the parade. All the American legion and auxiliary officials from all over the state come in, and we honor them and they speak.”

Hirst said the patriotic spirit will never leave the town, and she is optimistic for next year.

Barbecue was smoking and The Hotdog Shack set up shop as well. Hirst said the food was not organized by the committee, but friends in the community got together to provide food anyway.

Daisy Bost has attended all 74 parades and served in one capacity or another another over the years — doing everything from selling sorbet, food and organizing the annual concert. Bost said she was “extremely happy” the town got to do something.

“Not just this town, but many towns throughout America are patriotic,” Bost said. “We know what America can do, and that people of any color, race or creed can be free here. It takes a lot of of work, but it can happen.”

Janie Kluttz has been attending the parade since she was a kid. Kluttz said she hated the parade was canceled, but understands it was called off for a reason.

“I just love that it’s a small town,” Kluttz said. “Everybody comes together and all the money comes back into the town.”

She is looking forward to next year, noting the 75th anniversary will be a big one. Kluttz said she missed the crowds and the bands that are normally part of the celebration.

Patsy Beliveau remembers attending the parade back close to its beginnings, though she missed a handful. She was a drum major in high school and marched in the parade. When she was just an attendee, she parked in Leo Lingle’s front yard to watch the parade. She said Lingle was one of the people who helped start the parade.

Beliveau said she is sure the town will miss the support shown through the crowds that attend each year — crowds that make it so people can barely walk in the town.

“It supports all the things that they do here like this park and other things in the community,” Beliveau said.