Sports legends: Kiger was a tiger in 1955

Kiger said he’s been able to shoot his age (or better) every year since he was 72. 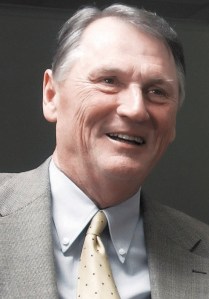 Kiger was an All-State basketball player in his heyday, the mid-1950s, an era in which Salisbury’s Boyden High was competing in the 3A Western Conference with the state’s largest schools — the Charlotte Central Wildcats, the Greensboro Whirlies, the R.J. Reynolds Demons, the High Point Bison, and so on.

The 1955 Boyden team was dubbed the “Durable Five” by the Salisbury Post’s Horace Billings after an improbable 66-64 win against a stout Greensboro team. Boyden coach Derwood Huneycutt tried a few different combinations during the 1954-55  season, but in the game against Greensboro, five players — twins Tom and John Kiger, Roscoe Gudger, Eddie Goodnight and 6-foot-3 Charles Sowers, the only man on the team who could dunk, went the distance.

There were no substitutions. Just five ironmen. Hence, the “Durable Five” nickname. It stuck.

Talking to members of the “Durable Five” 14 years ago, Goodnight offered the best quote about Boyden’s underdog status on the baskeball court: “We probably should’ve been playing East Spencer, but we were playing Charlotte, Greensboro and Asheville,” he said.

Goodnight, a junior in 1955 who became an All-State senior when he led Boyden to the 1956 state tournament, was offered a half-scholarship by coach Frank McGuire to play for the University of North Carolina. He opted instead for Lenoir-Rhyne, where he realized he had a better chance to play. Goodnight did well at L-R. Among other things, he made the biggest bucket in the 1958 North State Conference Tournament championship game in Lexington, as the Bears came back to win against a High Point team led by a future coach who would become important in Salisbury’s athletic history — Bob Pharr.

Goodnight, who made it big in the textiles industry, passed away in 2014.

Gudger passed in 2009. He spent 20 years in the U.S. Navy and 20 more working for Cone Mill. He was a two-time Legion Commander of Samuel Hart Post 14.

John Kiger, who worked 32 years for the Norfolk Southern Railroad, died first. He was a victim of cancer in 1999 at the age of 63.

Those three deaths have left Tom Kiger and Sowers, who played freshman basketball at UNC before switching to track and field as a hurdler and sprinter, to carry on.

The Kiger brothers arrived in Salisbury under tragic circumstances. They were 3 years old and living in Winston-Salem when their father died.

“An abcessed tooth poisoned his system,” Kiger said. “He was 34 years old. My mother had family in Salisbury, so we moved here.”

The games against Winston-Salem’s R.J. Reynolds High would always be big ones for Kiger because he would’ve been playing for Reynolds if not for his father’s untimely death.

“My sophomore year we were tied with Reynolds with eight seconds left and I jumped up, left of the lane, and made an underhanded scoop shot to win the game,” said Kiger, who was a 6-foot forward.

Kiger’s favorite story is about making a “steal” from his twin brother, who didn’t throw him the ball very much.

“John was still looking around, wondering where the ball went, when I made the shot,” Kiger said.

There was also the time Kiger made a three-quarter court buzzer beater.

Kiger got plenty of attention from the Charlotte press during his junior and senior seasons, when he was lighting it up for Boyden. Ron Green, one of the state’s all-time sportswriters, was fascinated with Kiger’s deadly jump shots, and he liked cheering for underdogs.

“Tiger Kiger Scared Sleeping Wildcats” was the headline on Green’s story after Charlotte Central managed to survive one of its struggles with Boyden. That was the night Kiger scored 20 points in the first half as Boyden took a lead that it couldn’t hold. Charlotte Central coach Irv Edelman, who would become the first head coach of the UNC Charlotte 49ers, growled to Green that “Kiger made every shot he took.”

Gudger had the game of his life, 24 points, as Boyden won on the road at Charlotte Central.

In a 71-61 home win against Reynolds, Kiger scored 21 points. He had 19 in a loss to the Green Wave of Gastonia. That was a critical setback that would damage Boyden’s postseason hopes. The top four teams from the conference joined the top four from the large schools in the East for a state tournament.

Boyden wiped out Harding in a non-conference contest. Kiger had 20 points in a hurry, but he sat down early.

“I wanted to play and I was a little upset,” Kiger said. “But Coach Huneycutt knew it was a chance to get in some of the guys who didn’t play that much. He was a very nice man. He was my history teacher as well as my coach.”

Sowers and Kiger made the critical free throws down the stretch in the epic victory over Greensboro that earned the “Durable Five” its immortal nickname.

“When they fouled me, I looked over at the bench, and Coach Huneycutt had put his head in his hands,” Sowers joked. “But I made them.”

Boyden was still in the running for a top-four finish and a postseason berth when it hosted Charlotte Central in its next-to-last game on Feb. 15. That would be the last game played in Boyden’s old gym. Goodnight scored 19, but Kiger was held to 13, and Boyden came up short.

The loss to Charlotte Central meant Boyden’s four seniors — the Kigers, Sowers and Gudger — had just one game left to play together. It would be on the road at R.J. Reynolds.

Huneycutt sat down Goodnight temporarily for that one and started an all-senior lineup. Lonnie Coulter took Goodnight’s place.

It would be Kiger’s greatest game. He scored 37 points in a 74-57 victory. He had 22 in the second half. He made 16 field goals that night, and he’s sure some of them would’ve been 3-pointers in today’s game.

Sowers added 13 points in his final basketball outing for Boyden. Boyden shot 65 percent in the first half.

“Kiger saved his best for last,” Billings accurately wrote in the Post.

Kiger’s 37 were the most points a Boyden player had scored in a game since Frank McRae poured in 42 against Asheville in 1952.

No Boyden or Salisbury player would top 37 points for 39 years. Not until Bobby Phillips scored 41 for SHS in 1994 against West Stanly.

The Charlotte press declared Kiger, who averaged 17.8 points as a senior, the second-best player in the conference, behind only Burlington’s Jerry Robertson, a 6-foot-6 rebounding machine who was headed to Duke.

Kiger, who capped his high school career in the East-West All-Star Game, figures he would’ve averaged 21 or so with a 3-point line.

Kiger remembers that disappointment. He also remembers heading to Lenoir-Rhyne for a tryout.

“I made four or five long ones in a row and they told me I had a scholarship,” Kiger said. “But it was an hour away. I wanted to try to work things out with Catawba.”

Earl Ruth was the coach of the Indians. Kiger liked Ruth and Ruth liked Kiger, but the scholarship money was gone, and basketball never really panned out.

Kiger was working and going to school. There wasn’t any chance he could make it to the practices.

So his basketball dreams faded.

He ran into McKinney years later. Kiger said McKinney remembered him and apologized for not recruiting him harder. Always affable, McKinney took him out to dinner.

Kiger found success after Catawba in pharmaceutical sales and on golf courses.

He also managed to pass on the athletic genes.

His grandson, Mac Kiger, plays tennis for UNC. He was named an Intercollegiate Tennis Association All-American for the 2020 season.

A story on Sowers is upcoming.