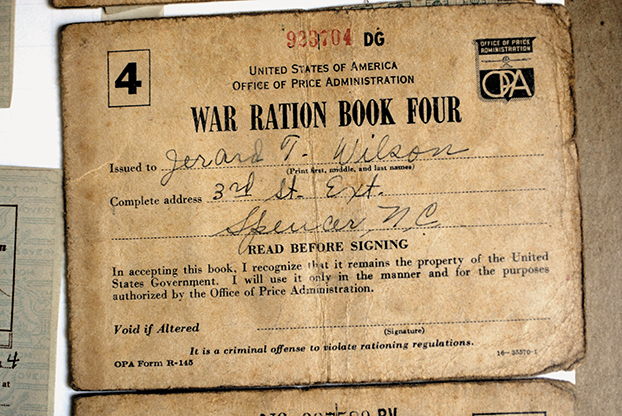 This file photo from 2007 shows a ration book that Gerald Wilson had from World War II. His mother saved it when she worked at N.C. Finishing Plant in Spencer.

Understandably, my knowledge is slim on moments from the homefront during World War II.

Sure, it was a topic in history courses. There are military veterans in my family and people who were alive at the time, but none old enough to remember what life was like in the 1940s. Like many, my knowledge is at least two generations removed from a direct experience.

Moments described in oral and written history, however, seem particularly poignant now. During a weekend in which the country celebrates independence and enduring freedom, it’s worth remembering just how significant past sacrifices have been in pursuit of a greater cause.

A well-organized series organized by the Rowan Museum and Rowan Public Library earlier this year included a talk about how people aided on the homefront during World War II. Evin Burleson, a museum curator, said only 3 gallons of gas were allowed weekly in addition to rations on basic food items.

There was a 5% “victory tax” on certain goods. Speed limits of 35 mph were enforced and more people rode bicycles because pleasure driving was banned in 1943.

Schools gave up their typewriters for the war. They were either melted for ammunition or given to the military. Burleson said Salisbury scrapped its trolley rail lines to help with the war effort.

Businesses were asked to make sacrifices, too.

A man named C.M. Simpson from the Charlotte District of the Office of Price Administration said on March 3, 1944, aides would check 10 selected items sold by food stores in March. During summer months, aides would also help with surveys of durable goods, clothing and services, according to a Salisbury Evening Post article. In cases where merchants charged more than the ceiling for prices, they were cited and asked to comply voluntarily. Simpson said the majority of violations resulted from a misunderstanding of regulations.

Also to help the war effort, the Salisbury City Council passed an ordinance giving authority to test blackouts and for auxiliary police and special officers to enforce rules for defense purposes. Lights during a blackout, for example, were declared a “public nuisance.”

Penalties included $50 in fines (about $780 adjusted for inflation) and up to 30 days in jail.

Imagine people using the same sorts of phrases that are commonplace today in response to restrictions. Does “it’s a free country” — one of many responses when people refuse to wear masks — have the same ring as a retort to an existential threat like ensuring troops overseas have the supplies they needed to win?

There were moments to celebrate as well, including street parades for war bond campaigns. On Tuesday, June 6, 1944, churches were crowded as businesses closed from 11 a.m. to noon so that people could attend a service of their choice and pray for the safety of the Allied Forces.

To be clear, people today are also being asked to make sacrifices in an effort to stop an existential threat — COVID-19.

Despite assertions to the contrary by the president, it’s not a war. But a failure to adequately respond to a deadly virus for which there’s not a vaccine could have dire consequences, too, not the least of which is that family, friends, neighbors and strangers could end up worse for the wear after recovering or die after contracting COVID-19.

The small sacrifices the public is asked to make now include wearing a mask or cloth face covering, washing hands regularly and waiting 6 feet apart. In stores, people are asked to follow directional signs to enter and exit and while moving around inside. It only takes one trip to any store to see people aren’t interested in following instructions.

The public has also been asked to comply with some purchasing limits after an initial rush to the stores resulted in shortages — the most memorable of which was toilet paper.

In our personal lives, we’re are asked not to gather in groups larger than 10 indoors and larger than 25 outdoors. Those are general guidelines, though. COVID-19 can spread any place where more than one person is gathered. And it’s spread easier when simple precautions are not taken.

Sure, the circumstances are not exactly the same as a world war. But the response in 2020 must be one with an equal measure of collective resolve.

There must be a focus among public officials and businesses in enforcing regulations. Otherwise, they’re just words spoken from a lectern and placed on a piece of paper.

This should be a moment where everyone sacrifices some for the benefit of the whole. Is the Salisbury-Rowan community up for the challenge?