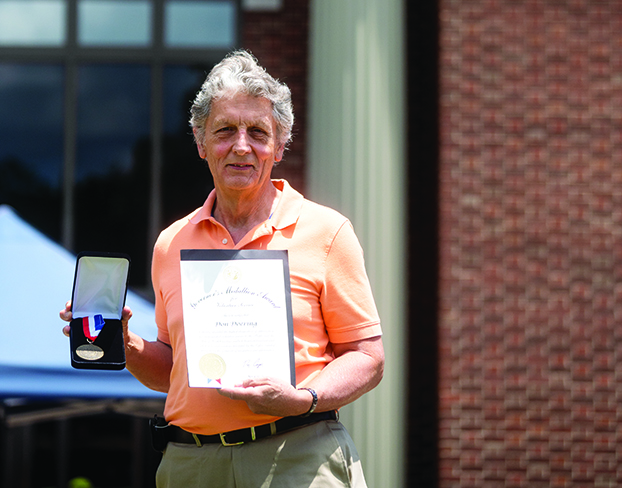 Josh Bergeron / Salisbury Post - Rowan Literacy Council volunteer Don Doering poses for a photo outside of the Rowan Public Library, where he has often tutored folks. Doering is a recipient of the Governor’s Volunteer Service Award.

When Don Doering received the Governor’s Medallion Award for Volunteer Service in the mail, it came as a “complete and total shock.”

He was nominated by the Rowan Literacy Council, where he volunteered a whopping 595 hours in 2019. That doesn’t include his new duties as board president, he says, as he did not log interactions with other literacy councils in North Carolina to find best practices, and late-night hours to rewrite other councils’ documents and make them relevant to Rowan.

Since he assumed the presidency, the board has rewritten the mission statement, increased awareness in the community and built partnerships with other organizations in the area. Most prominently, they’ve worked to develop other avenues for funding since not being awarded United Way funds last year. Since COVID-19 hit, he says, the board has not been very active, although many tutors are working with their clients via Zoom.

The medallion is usually awarded in an “in-person” event, but it was mailed this year.

The nomination calls Doering a virtual “octopus” with tentacles reaching into every facet of the organization. His wife decided to volunteer in 2013 and asked him to come to the training with her.

After volunteering for four years, Doering joined the board in 2017 and was elected president in 2019.

Doering tutors according to the availability of his clients, he says, and might be at the library at 9 a.m., again at noon, and back at 4 p.m. His wife teases him about living at the library.

At an initial meeting with a client, Doering shares a bit about himself and encourages the client to share a little bit too. Working together, they establish some goals. If the client is somewhat literate, he may wish to increase his skills. If a client has no English, she may want to be able to read a book to her child. In subsequent meetings, they work toward those goals. “It generally takes a couple of years to meet that goal,” Doering says, “and then we work to develop a new goal and we work toward that.”

For some folks, he says, reaching that primary goal is sufficient and they’re done. For others, the relationship continues.

He currently has two clients but has had as many as five at one time. Meetings usually last about an hour and a half. Doering has found that’s about the limit for good concentration. Clients might meet once a week or more. He spends time preparing for each tutoring session, as well.

“Probably by the third or fourth session, the trust has begun to develop between myself and the client,” he says. “Then I am no longer a tutor: I’m a counselor, a therapist, an advisor.”

He’s taken clients to the Department of Motor Vehicles, to the district attorney’s  office for a restraining order against a boyfriend, or to the community college. He’s helped them with income taxes. He says the larger part of what he does is help people understand American culture, laws and customs.

One of Doering’s clients, a woman from the Ukraine, will graduate from infantry training in the Army in two weeks. He worked with her for two and half years. Her goal was to get American citizenship. Despite all kinds of hiccups with green cards and family, they persisted, and she did acquire citizenship. She aspires to be a pharmacist, and Doering had her lined up to take pharmacy tech classes at Rowan-Cabarrus Community College. She enlisted, however, on Feb. 5, and has been at Fort Benning ever since. Doering says her latest letter said she has already saved $4,000 for college.

“I kept telling her the Army would change her,” he chuckles. “Now in every letter she says, ‘Boy, were you right.’ ”

Doering has had several English as a Second Language clients and has a real heart for helping them.

“There are just under 13,000 people in the community who speak little to no English,” he says. “If we help 75 people over a few years, we are barely touching that iceberg.”

As he reflects on his presidency, two burgeoning needs come to mind. Before COVID-19, the board was working to raise funds for two part-time employees to teach groups of people — to approach that iceberg more efficiently.

He says the Hispanic population has requested a satellite location. Doering envisions buying a trailer in a densely populated area off Airport Road, equipping it with wi-fi and computers, and holding classes there.

At age 72, he might think about cutting back a little on his hours. Both of Doering’s parents worked to serve others: his dad was a pastor and his mom was a teacher. After four years in the Air Force, Doering served as a nurse in hospitals for 40 years. Today he cares for his wife, who is disabled, and volunteers teaching others to read.

“I might take a little time for myself, soon,” he says. But his eyes sure do glisten as he imagines that satellite location.

The Governor’s Medallion Award for Volunteer Service was established in 2006 to recognize the top 20 to 25 volunteers in the state. Only one nomination per county is allowed. A statewide panel evaluates the nominations before selecting who gets the award.