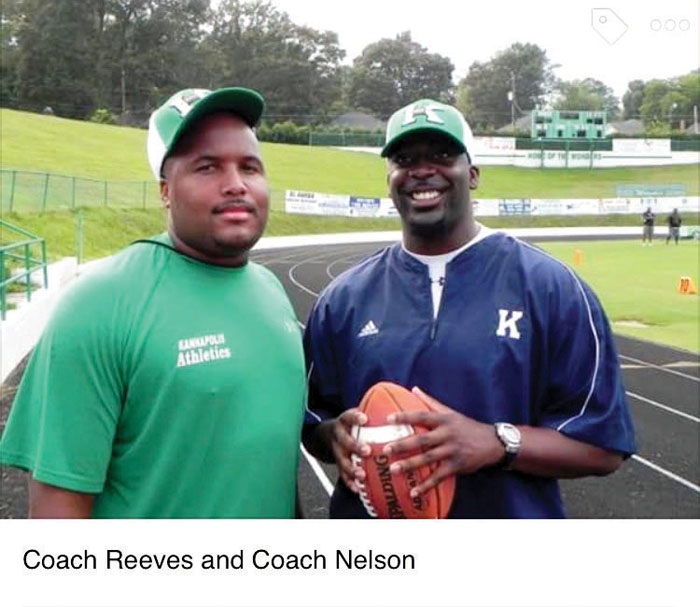 HUNTSVILLE, Ala. — Josh Reeves lost his father when he was 5 years old.

So his substitute dads growing up in Kannapolis were his football and basketball coaches. Coaches such as Ron Massey and Noah Lyon, Shelwyn Klutz and James Allen.

“There were a lot of coaches who believed in what I could be and what I could do, and I still carry a little bit from all of them,” Reeves said. “Sports were my salvation, and I wouldn’t have made it without my coaches. When I speak to our team now, I speak as a guy from a small town in North Carolina. I speak as a guy who got a college degree because he had coaches who believed in him.”

Reeves, 35, is the defensive coordinator for the Grissom High Tigers in northern Alabama. It’s a large school, named after one of the first astronauts, Virgil “Gus” Grissom. There are five other high schools in Huntsville, so Grissom has lots of rivals.

Home to the U.S. Army’s massive Redstone Arsenal, Huntsville is one of the thriving population centers in Alabama.

Reeves was skeptical when his brother-in-law, Grissom’s head football coach Chip English, talked about relocating to Alabama. English talked up the higher pay and tremendous respect for high school football coaches in Alabama.

But for Reeves, his history-class perception of the state was negative. There was Alabama’s sad history as one of the harshest barriers to the Civil Rights Movement in the 1960s. Violent days of dogs, billy clubs and fire hoses.

Reeves’ trip to Huntsville, however, changed everything. The first thing they showed him was Grissom’s weight room, the Ronny Massey Weight Room. Ronny Massey was the last high school coach to lead a powerhouse team at Grissom. He was a legend in Alabama coaching circles until his death from cancer in 2010. They named the weight room after him.

Another Ron Massey? Reeves smiled at that. Then he wiped his eyes. He took a picture of the weight room with his phone and texted it back to North Carolina to his friend, Zach Massey.

Zach Massey, is the son of the Ron Massey who piloted the A.L. Brown Wonders for 11 football seasons, for 120 wins and nine conference championships. North Carolina’s Ron Massey passed away in 2014. He wasn’t just Reeves’ high school football coach. He also was the guy who gave him his first opportunity in the coaching ranks.

“So I get down to Huntsville, and there’s the Ronny Massey Weight Room,” Reeves said. “I took that as a sign that it was the right spot, the spot where I’m supposed to be.”

Reeves was a basketball terror growing up. That was his game when he started with Gray-Y hoops at the Kannapolis YMCA.

“It was coed, and one year my team scored 91 points and I had 89 of them,” Reeves said with a laugh. “Hey, we beat Aundrae Allison’s team.”

He grew up not far from the Hardins, A.L. Brown coach Bruce and his twin sons Justin and Blair, who were three years older than Reeves. There were a lot of games in fields and backyards. Bruce told Reeves he had a chance to be something special in football.

There were fierce middle school basketball battles, with Reeves leading Kannapolis against some young giants from West Rowan. Reeves played AAU ball for coach Andy Poplin and had Chris Paul as a teammate.

By high school, however, Reeves’ powerful body was moving him toward the football path. He’d stopped growing vertically and his shoulders, arms and chest were getting thicker.

“Basketball was always the first love, and I loved every minute of basketball I played for (coaches) Shelwyn Klutz and James Allen at A.L. Brown,” Reeves said. “But you’ve got to find your way in life. Kannapolis was a football town, and if I was going to get a college scholarship it was going to be in football.”

Some of his fondest memories of A.L. Brown football were jayvee days. He was called up from the jayvees for playoff runs in 1999 (Hardin’s final year) and 2000 (Massey’s first season in Kannapolis).

“All of a sudden I’m on the same field with guys I’d always looked up to — Lee Basinger, Josh Lee, Jason Brown, Justin Chambers,” Reeves said.  “I tried to be a sponge and learn as much as possible.”

He made a name for himself as a tough, hard-hitting linebacker for the Wonders in 2001 and 2002. He caught a few touchdown passes, but he was 95 percent defense.

His most memorable win was the 2001 South Point game in Kannapolis. A.L. Brown started that year 0-2, trailed South Point at the half, 23-7, and appeared headed for 0-3.

His most memorable individual outing was against Asheville in the first round of that season’s 3A state playoffs.

“Asheville threw everything at us — hook-and-laterals, fumblerooskies, you name it,” Reeves said. “They tried a bunch of screens. They ran a screen on a fourth-and-10, and I read it and made the stop that helped us win the ballgame, 21-14.”

He was the 2002 winner of A.L. Brown’s “Lug” Leazer Award, which goes to the Wonder with the most team spirit, the highest character, the strongest leadership qualities.

The college teams that Reeves played on at Lenoir-Rhyne were far less successful, but Reeves did his part.

He was starting at fullback as a true freshman — and he held that starting spot for four seasons. He was team captain as a senior, never took that responsibility lightly, and remains close to former L-R head coach Wayne Hicks.

“We didn’t have great records (5-5 was the best), but my class — I think only about nine of us stuck it out the whole time — helped the program turn the corner,” Reeves said. “When you start for four years, that’s a pretty good college career, and I’ll never forget scoring a touchdown at Carson-Newman when I was a freshman.”

Reeves wasn’t sure what was coming next, but his friend Antoine Nelson talked him into seeking a position on A.L. Brown’s coaching staff. Reeves joined the staff as one of the defensive line coaches. That was in 2007.

“Maybe the best decision I ever made,” Reeves said. “I remember Coach Massey watched me work with the players for a little while, and he told me, ‘Josh, you’re definitely a coach. I see it in you.’ ” I guess the rest is history.”

But then Reeves was out of the game for two and a half years.

“I was at that point where I wanted to make more money, and I went to work for social services,” Reeves said.

English, whose only previous experience as a head football coach was with the A.L. Brown jayvees, was hired by Lenoir’s West Caldwell High in March, 2014. They interviewed 14 candidates. They picked English. It was the ultimate rebuilding project — a downtrodden program that had suffered through 11 straight losing seasons. English’s first challenge was talking Reeves into returning to coaching and joining him as defensive coordinator.

” I didn’t know anything about West Caldwell,” Reeves said. “I asked Chip if they were any good and he said they’d gone 6-60 the last six years. I told Chip, ‘You’ve never been a head coach and I’ve never been a defensive coordinator, so what in the world are we talking about doing?’ But we trusted in the knowledge we’d gained and in our ability to work with young people.”

English had a vision and a plan. Make football fun and keep it simple. West Caldwell had athletes and usually was stout in basketball, but he had to get those folks in football pads.

“Then it was a matter of getting the right kids in the right places,” Reeves said. “We had to play a lot of kids both ways.  But we got them to buy in to what we were doing. In 2014, we won our first game and give up six points. Then we lost to the big rival, South Caldwell, 28-7, but that was a program that usually beat West Caldwell, 48-0. We won at Maiden, a good football school, in two overtimes. We won four games that first year.”

“It’s not like we had a lot of college prospects,” Reeves said. “But when they start to believe, ordinary kids can do extraordinary things.  We had  a great season in a great league and we were coaching against some of the best coaches around.”

Reeves also was the varsity girls basketball coach at West Caldwell. That team also made strides. His first team was 2-18, and he wondered what he’d gotten himself into. But his last two teams made the state playoffs. He used the concepts he learned from Coach Klutz at A.L. Brown

“I also learned if you’re going to have a rough season, play young,” Reeves said. “Don’t lose with seniors. When you’re losing with seniors, that’s when you’re in trouble.”

The dramatic turnaround of West Caldwell football made English an attractive hire for Grissom, which was in exactly the same boat as West Caldwell when English and Reeves arrived there. Grissom had lost 20 in a row and 29 out of 30 (Alabama teams play 10 games a year) when English was hired in January, 2017.

Reeves didn’t commit to tackling another rebuilding project immediately. He was interviewed as a candidate to follow English as West Caldwell’s head football coach, although DeVore Holman was hired.

Reeves had reservations about making the move to Alabama — at least until he saw the Ronny Massey Weight Room. After that, he was all in.

“My mom always told me to leave a place better than when you found it, and we were able to that at West Caldwell,” Reeves said. “It was time to move on — and try to do it all again with a different group of kids.”

There hasn’t been a massive turnaround for the Grissom Tigers over the past three seasons, but the football progam has lifted itself out of the mud — 3-7, 4-6, 3-7. A win over rival Huntsville High got the fan base excited.

But it’s a process. Reeves’ daily mantra is there can be no progress, without process.

Reeves is hopeful there will be a 2020 high school football season because Grissom has a serious chance to make noise for the first time in a decade. The program has been building steadily. There’s a defensive end commited to the University of Kentucky, a quarterback who has a pile of D-I offers, a lockdown cornerback who will play at the next level.

“Life is good in Alabama,” said Reeves, who is married and has three children. “Football is king. Football is valued here and the effort and time coaches put into is valued . The pay scale for football coaches is so much different than it is in North Carolina. I’m not closing the door on returning to North Carolina someday, but it would have to be as a head coach.”

He has few regrets.

Coaching is what he was born to do, and he’s getting to do it.

“As a coach, you get to make your mark, but at the same time, you have the chance to give back to young people,” Reeves said. “It’s fulfilling work. For a lot of us who played football, coaching is the next best thing.”