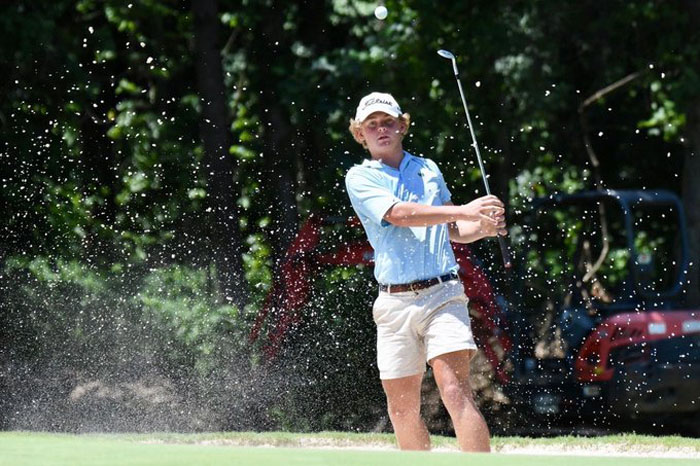 That victory came in 2016, when Barr teamed up with Troy Beaver, who was 9 years older.

It’s not easy coming up with an encore after a performance like that.

“Winning at 13 was unbelievable,” Barr said. “My next-door neighbor and one of my best friends is Michael Childress, and he was on a winning Labor Day team when he was 14. So I edged him out as far as being the youngest winner. There’s nothing better than that.”

Child actors tend to fade from the scene in Hollywood, but Barr, now 17 and a 6-foot-1 rising senior at Cannon School, shows no signs of vanishing.

It looks like he’ll be a force in golf for years to come.

“I was able to get a pretty good hold on the game at an early age,” Barr said. “There’s a picture of me when I was 3 or 4 years old, holding my first set of clubs.”

The athletic gene pool for Barr is strong. His mother, Gwin, was a high school soccer player and was an exceptional tennis player at Salisbury High and Salem Academy in Winston-Salem. She made the tennis team at Duke and lettered for the Blue Devils in the 1989 and 1990 seasons.

Barr’s father, Matt, was on the football team at Columbia University and is a solid golfer.

“He can play,” Charlie said. “He’s a 7-handicap and he can get around on a golf course. Being able to play golf that well has helped him in business.”

Another generation removed from Charlie there are at least three linksters. Gwin’s parents, John and Boots Carter, were avid golfers, although her late father excelled even more in tennis. Matt’s father, Don Barr, played golf at Notre Dame. He also was part of the Fighting Irish basketball program in the mid-1950s. Don’s basketball buddies included an athlete who was considerably better in football than hoops — Heisman Trophy winner Paul Hornung.

“My dad likes to say that the golf gene in our family skipped a generation,” Charlie said. “My grandfather, Don, was great at golf. He was still close to a scratch golfer when he was 60. My grandmother, Boots, was the biggest reason I played so much golf so young. When we’d go to the mountains, I’d be on the course with her and when we went to Florida I’d play with her.”

Charlie was destined to get involved in athletics. After graduating from Notre Dame, Don Barr was an associate publisher and sales director at Sports Illustrated. Both of Charlie’s parents were working for Sports Illustrated when they got married in 1995.

As much as he enjoyed the sport, Barr didn’t limit himself to golf right away. At Salisbury Academy, he was well-rounded. He played soccer, tennis and basketball and ran cross country, in addition to shining in golf. He was the school’s male athlete of the year for 2016-17.

“I really liked basketball and wanted to be LeBron James or Steph Curry for a while there,” Barr said with a laugh. “But after I got to high school (at Concord’s Cannon School), I concentrated on golf.”

Charlie credits Warrior pro Brian Lee as his swing coach and the person who’s been the biggest difference-maker in his promising career.

“Brian flipped my whole game around and has been a huge part of my success,” Barr said. “The key for me, the thing that’s separated me from most junior players is my driver. I hit quite a bit longer than most of the kids in Junior golf. On a lot of the par-4s it’s driver-wedge for me, but it’s driver-8-iron for my opponents. That’s a great advantage.”

As he’s matured, nerves have become less and less a part of the equation for Barr.

Usually, he can just go out and enjoy the round now. He can play loosely and aggressively, without putting extra pressure on himself.

“When I was 13 or 14, that wasn’t the case, especially when I was playing with adults,” Barr said. “But I’ve kind of been one of the guys out there now for a few years. Now I can stay pretty calm.”

As a freshman at Cannon School in 2018, Barr made the All-State team and teamed with his neighbor, Childress, and several more college-bound stars for a 22-stroke victory in the NCISAA state championship tournament in Pinehurst. Barr shot 75-73 and placed sixth individually.

As a sophomore in 2019, Barr had the best stroke average in NCISAA. He was All-State again. Cannon School won the NCISAA state championship tournament by 21 shots. Barr finished second individually, behind teammate TJ Moyer. Barr shot 70-76 at Grandover Resort in Greensboro.

Barr’s junior season was squelched by COVID-19. Cannon School didn’t get to play a single match in the spring, but it should’t hurt Barr’s recruiting too much. He has excellent grades. A lot of schools know who he is. A lot of schools are interested.

“I don’t know where I’ll go,” Barr said. “All I can right now is I’m looking forward to playing college golf. I hope to make an announcement on a commitment later this summer.”

Quite a few of the standard summer events were canceled or postponed. Barr didn’t get back into serious competition until last week’s North Carolina Junior Boys Championship in Winston-Salem, where he made an incredible run. He had to make a lengthy putt just to get into match play. He was seeded 54th in a 64-man field, a real underdog, but then he won five matches and reached the final.

“I didn’t have my best stuff on qualifying day, but then I took it deep in match play,” Barr said. “I played well and was under par every round. I actually had the lead, 1-up, going to the 18th hole in the championship match, but I had a putt lip out  and lost the hole. We both birdied the first extra hole. Then he (Clayson Good) won on the 20th hole.”

Barr had paced qualifying for the Rowan Masters with a 71, but when he made that run in Winston-Salem, it conflicted with the Rowan Masters schedule. Barr had to withdraw from the Masters held at Warrior in China Grove.

“The Rowan Masters is a tournament you hear and read about a lot, so I was really looking forward to playing in it for the first time,” Barr said. “Winning all those matches in Winston-Salem caused a problem, but I guess it was a good problem to have.”

The Barrs live next to the second hole at the Country Club of Salisbury. That’s obviously Charlie’s home course. He shot his career-best 62 there.

Barr, a middle child between two sisters, has proud parents who are all-in as far as his golf career.

“They give up vacations every summer to follow me around golf courses,” Barr said. “I couldn’t do it without their support.”

Barr has qualified for several marquee events. He’ll be in the Carolinas Amateur in Wilmington (July 9-12), which will feature elite players from both Carolinas, as well as the North Carolina Match Play Championship in Holly Springs (starting July 29).

Those are tournaments that could provide the setting for a breakout victory by Barr, who has won smaller Junior events.