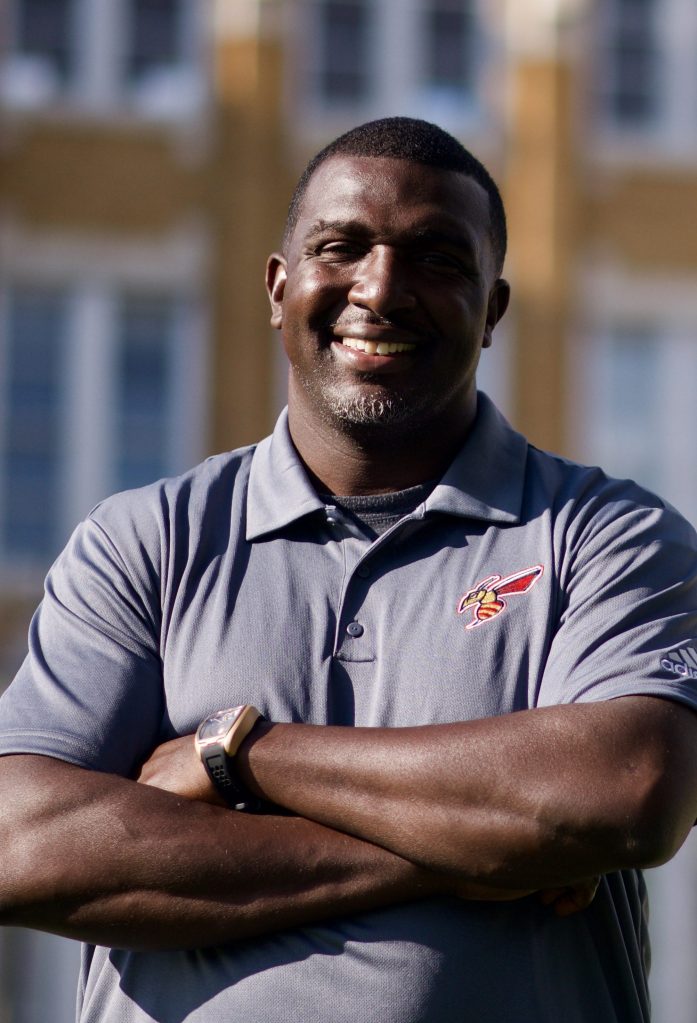 SALISBURY — Marvin Moore says he never expected to be a principal until he met a man who would become a mentor.

Jerome Heggins, husband of Mayor Pro Tem Al Heggins, was principal at Isenberg when Moore interviewed to be a physical education teacher at the school.

“He smiled at me, with that devilish grin. He had a gold tooth in the front of his mouth,” Moore said. “Cool as a fat cat, probably one of the coolest guys I’ve ever met. He’s my mentor to this day, and he said to me ‘You be careful what you ask for because you just might get it.’ ”

Moore was assistant principal in four years and principal after eight. He said he ran into Heggins after he was named principal at Isenberg, and they both burst out laughing.

If you asked a younger Moore about his career expectations, he admits, the answer wouldn’t likely be spending the previous eight years at the helm of Isenberg Elementary School on his way to becoming principal at Salisbury High School.

But some of the most influential people in his life were principals, including Heggins and his own high school principal, who reached out to him after more than 20 years to congratulate him.

Moore is a Hertford County native. He played high school basketball and arrived at Catawba College in 1995. He was inducted into the South Atlantic Conference Hall of Fame in 2003, was the conference Athlete of the Year, tournament MVP, All-Region and All-America in 1999. He also had a brief stint as a professional player in France.

Moore still speaks to his high school basketball coaches, who he also cites as major influences. Moore said his head coach and athletic director, Charles Simmons, was a father figure for him. Calvin Moore (no relation) was assistant coach and a science teacher when he was in high school.

The pair worked out with the athletes, held them accountable and did everything they could for the students. Moore said the pair do not realize how many people they have impacted by being positive male role models in education.

“I think about the way I do things right now as an administrator,” Moore said. “I do exactly what they did.”

On Monday, the Rowan-Salisbury Schools Board of Education named Moore as the next principal at Salisbury High School. He is succeeding Luke Brown, who accepted the same role at Mooresville High.

Moore is the first African-American male to become principal at SHS, one of the first public high schools in the state. It was founded in 1904 as Boyden High School, which was later combined with J.C. Price High School in 1971 amid desegregation as a result of the Civil Rights Movement.

Isenberg feeds students into SHS, and Moore said he will see some of the students who passed through Isenberg a second time.

“I think Rowan County is in a great place to look at things objectively, and there is great opportunity for everybody to learn, and learn from each other in this time,” Moore said, adding there has never been a time in this country like this.

The jump from elementary to high school does not worry him.

“When you are an administrator, you tend to want to show everybody respect, to get respect,” Moore said. “No matter whether they are 5 or 15, the general premise is people want to be acknowledged, valued and respected. If you’re doing that, it doesn’t matter how old they are. They’re going to want to be in your presence, and it’s not a hard thing to do.”

Moore said he wants to develop positive relationships with the people at the school. He wants to learn everyone’s name, their interests, where they live and even things they do not like.

Moore said he does not just want to learn every student’s name; he wants them to feel comfortable enough to call on him when they need help. He wants staff to feel the same way. In the current social climate he wants to help the school navigate through understanding and healing.

“I want everyone to feel valued in this world,” Moore said.

“The most important thing we can do with any child is to always listen,” Moore said. “If you are willing to listen intently you can find out exactly what they want and what they need. My job is to listen first, and I don’t care if they’re 5, 10, 15, 20, 25, 30, whatever, the thing we need need to do if we’re in a position that can affect change is we’ve got to be willing to listen.”

Moore said he is living the dream to be doing the work he wants to do, and he thinks often about a Bible verse his mother would say to him, Proverbs 18:16.

“A man’s gift makes room for him and brings him before the great,” states the translation in the English Standard Version of the text.

In the past, Moore would go out and play sports for fun, but these days watching his four kids grow and spending quality time with his wife it what brings him joy.

“I love to work, but those things charge me up,” Moore said.