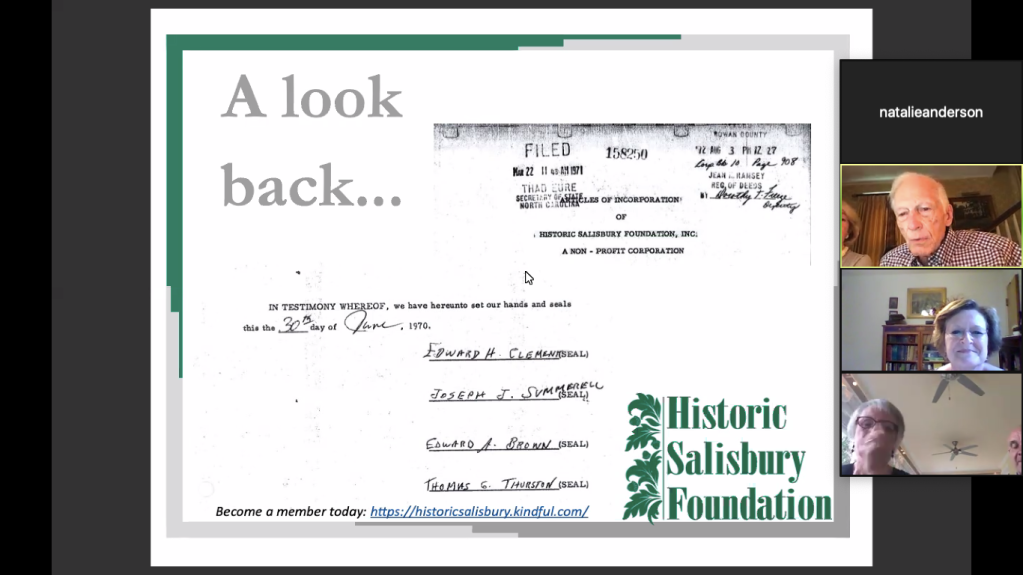 SALISBURY — The Historic Salisbury Foundation nominated two new members to its board of trustees, honored the departure of the foundation’s founder from the board, reviewed projects from the past year and looked ahead to the future during its annual meeting held virtually Tuesday night.

The meeting began by paying reverence to the Historic Salisbury Foundation’s founder, Ed Clement, who is now “retiring” from the board of trustees after serving for 48 years. The first meeting of the foundation was April 12, 1972.

During his time, the foundation purchased the Josephus Hall House, Grimes Mill, the Southern Railway Passenger Depot, the Fulton-Mock-Blackmer House, the Napoleon McCanless House and over 100 buildings threatened with demolition.

Clement said the board of trustees has “stood strong” to preserve the history of Salisbury.

Summing up his comments, he added, “Stand strong, persevere and look ahead.”

Two new appointees will serve on the board of trustees after the departure of Clement and Benjamin “Chip” Bridges III: Rachel Davis, a merchandising manager for Lee Jeans who was born in Nashville and moved to Salisbury with her family two years ago and Andrew Eller, a Rowan County native with a career in construction.

Historic Salisbury Foundation executive director Sada Stewart presented the “year in review” to attendees, noting that the meeting is one week shy of one full year she’s served as the foundation’s executive director.

Stewart highlighted the filming of “The 24th” movie, as well as History on Tap events that toured Wallace & Sons Dry Goods/Annex Building and the Salisbury Station catacombs. Other events included Blankets and Bluegrass, the October Tour held at The Hive, the Hall House Christmas and the BlockWork beautification project, which Stewart said helped at least three properties.

Stewart also noted the Hall House has a new coat of paint as part of the foundation’s year end appeal campaign, and the foundation is currently in the last step of adding gas lamps to the Hall House lawn. Additionally, the McCanless House, which was purchased in spring 2019, has preservation and landscaping plans underway as it will be on the October Tour in 2021.

Some future events are still planned, but may change depending on COVID-19. The 2020 October Tour will be held virtually this year from Oct. 9-11. The Hall House 200th Celebration has been postponed to May 7-8, 2021.