A man rang the bell around 10:30 a.m. at the store, located at 1040 Freeland Drive, and asked if he could upgrade his iPhone to a newer model. The manager told the man he could and would need to provide some information in order to process the upgrade, Walker said. 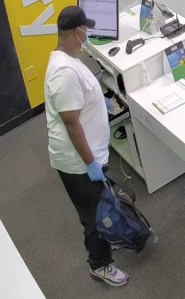 The man requesting an upgrade said he had to get his wallet from his car. He returned to the store with a gun and told the manager to get money from the safe at the back of the store. The manager handed the man cash from the safe. The suspect took money from the register and placed several iPhones into a backpack.

A second person who was also wearing a mask began gathering cellphones as well. The two left the store.