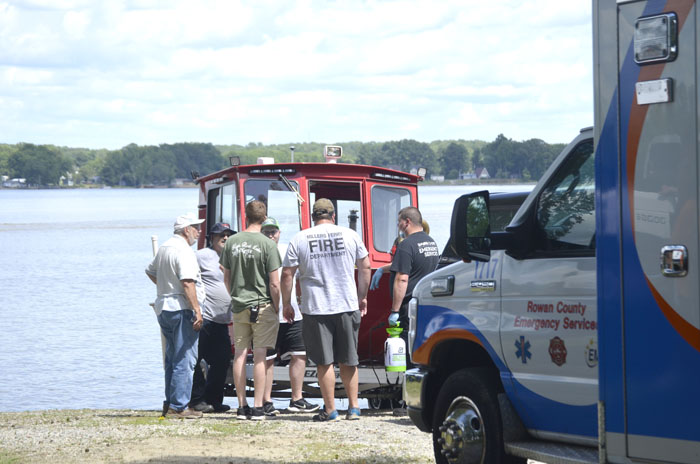 A man contracted to landscape a Rendleman Road home fell in the water at Swearing Creek after it was believed he had a seizure. He’d been in the water for about 45 minutes. Rescuers docked their boat at the Rowan Shriner’s Club and placed him into a waiting ambulance. Shavonne Potts/Salisbury Post

SALISBURY — A man who is believed to have had a seizure and drowned while landscaping at a Rendleman Road home was 34-year-old Jamie Heun of Landis, the Rowan County Sheriff’s Office said.

Heun and his brother, Max Heun, were contracted to do landscaping at 375 Rendleman Road on Monday, said Rowan Sheriff’s Capt. John Sifford. Max hadn’t seen his brother for some time and began to panic. He asked neighbors if they’d seen him, but no one had, Sifford said.

Max began searching for him in the Wildwood Acres neighborhood and returned to the area to find the string trimmer Jamie had been using floating in the water. His shirt was at the water’s edge, according to the Rowan County Sheriff’s Office.

Sifford said Max called 911, told rescuers his brother suffered from seizures and that he believed his brother fell in the water. The Miller’s Ferry Fire Department responded as did the Rowan County Rescue Squad and Rowan County Sheriff’s Office.

Heun was found about 15 feet from where he was last seen. According to Miller’s Ferry Assistant Fire Chief Bobby Fox, it’s likely that Heun was in the water for about 45 minutes. He was pronounced dead at the scene. Officials are awaiting results from an autopsy.