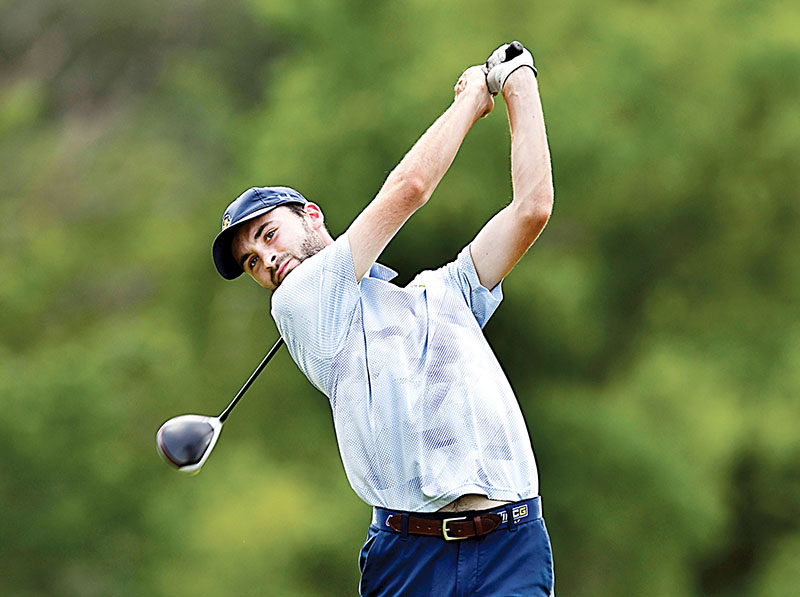 CHINA GROVE — Nick Lyerly and struggle don’t usually appear in the same sentence, but Lyerly wasn’t at his sharpest in his Sunday morning semifinal in the Rowan Masters.

Fortunately for Lyerly, neither was his worthy opponent, eight-time tournament champion Keith Dorsett, who came into Warrior Golf Club’s marquee annual event having won as many Rowan Masters as the rest of the world combined.

“I actually won a couple of holes with bogeys,” said Lyerly, the top-seeded defending champion. “That doesn’t happen much. That never happens against someone as good as Keith. Neither of us played our best golf.”

Lyerly had a 1-up edge at the turn and finally subdued Dorsett on the 16th, 3 and 2, but two of the finest golfers in recent Rowan history felt like kicking themselves. Lyerly is a perfectionist, and while he’d survived, he didn’t care for the way he’d played.

Carefully watching Lyerly smack wayward shots and even make a few bogeys, seventh-seeded Ritchie Fesperman, who would become the last man standing between Lyerly and a repeat Rowan Masters championship, believed he had a chance in their Sunday afternoon final.

But that didn’t happen.

“The Nick I saw on Sunday morning, I had a chance,” Fesperman said. “But that was not the Nick I got on Sunday afternoon. I got the really good Nick. Automatic with his driver.”

Lyerly punched out Fesperman, ending their match on the 13th, 6 and 5, a relative rout against a sturdy golfer who shot 74 in qualifying, but who is always a threat to break par.

In 2019, Lyerly breezed in the Rowan Masters final by an even bigger margin, 8 and 7.

Lyerly has played an elite collegiate and amateur tournament schedule for a long time. He’s played all over the country and is good under pressure. He’s now 2-for-2 as far as the Rowan Masters. Prior to last summer, he’d never been able to compete in the local event. He’d always had a scheduling conflict.

“I do enjoy this tournament, playing close to home,” Lyerly said. “This summer hasn’t been as much fun as it usually is (because of COVID-19), but this weekend at Warrior was great and it was competitive. I’m just glad golf courses are still open.”

To get a chance to take on Lyerly in the final, the 33-year-old Fesperman had to outlast 52-year-old Stephen Bullock in an exciting semifinal.

Fesperman is a 2005 East Rowan graduate who lives in Durham, but he gets back home a lot. Often, it’s his love of golf that brings him back.

He’s a grandson of Granite Quarry legend and former MLB pitcher Jay Ritchie, who passed away in 2016. His mother is the lady who runs The Trophy House of Salisbury, the business that has produced thousands of plaques and awards that adorn the shelves and mantels of local athletes.

“My dad always lets me know when there’s a Rowan tournament coming up that I need to try to qualify for,” Ritchie explained.

Bullock, a Rowan resident, was the feel-good story of the tournament.

A 1989 Wake Forest graduate with two children in college, Bullock is CEO of Power Curbers, an industrial equipment supplier. Two decades ago, he was at the peak of his game, playing in events like the North Carolina Amateur Championship.

Bullock had a shaky day in stroke-play qualifying for the Rowan Masters, shooting 87 and barely making the cut. He was the No. 30 seed in a 32-man field. But then he won one tense match after another, including a stunner against third-seeded youngster Hank Robins in the opening round. Robins had shot 72 in qualifying.

“I had not been playing very well and I was pretty bad in qualifying,” Bullock said. “The thing is my driver was the favorite club in my bag for 25 years, but the last five years it’s been AWOL. Then, this weekend, my driver kind of found its way home again. I played better. It was nice to be relevant.”

In their semifinal clash, Bullock got the jump on Fesperman early, made the turn 1-up and stretched his lead to 3-up after 12 holes. It looked like his Cinderella story was going to last all the way to the final.

But the advantage Fesperman had on Bullock, besides youth, was driving distance. He crushed his tee shot on the par-5 13th, the course’s longest hole, took that hole and got back in the match. That was the hole he’d been waiting for.

“My comeback started with the driver,” Fesperman said. “Stephen is solid. He hits a nice draw, controls it really well, makes very few mistakes. I couldn’t get anything going for a long time, but then on 13, I did get it going. Then I made really good chips on 16 and 17. I was in the back bunker on 17, but I still got it close.”

After taking the 17th, the other par-5 on the back side, Fesperman had surged to a 1-up lead.

“I’m used to being 40 or 50 yards shorter off the tee than some of the big hitters, and the way Ritchie hits it, it probably was even more than that today,” Bullock said. “And I was running out of gas.”

Fesperman had a chance to win in regulation, but he hit out of bounds on No. 18. Bullock won the hole, squared the match.

But the first extra hole proved decisive. Bullock had great memories, but it was Fesperman who advanced to face Lyerly.

“I was really happy with how I played in this tournament,” Bullock said. “But the hard part is that when you’re 52, you don’t know how many more chances you’ll get to play for a championship.”

Lyerly expected a tough bout with Fesperman. He’d watched him pound his driver and execute with his short game.

“Honestly, if we had been matched up in the morning round, the way I was playing and the way Ritchie was playing, it would’ve been a very tight match between us,” Lyerly said.  “But I definitely played a whole lot better in the afternoon round. I was better with the driver. I left some putts out there, but I made some. And I didn’t miss many spots.”

Lyerly was off the green on the par-3 No. 3 hole, but he chipped in for a birdie. That shot gave him the lead, the energy and the momentum. He never looked back.

On No. 4, Ritchie conceded the hole and went two down. Lyerly was just off the green on the par-5 in two and Ritchie had pushed his third shot out of bounds.

“It was a conceded eagle,” Lyerly said. “It probably would’ve been a birdie.”

After seven holes, Lyerly led by three. He made the turn 4-up. After he birdied the 10th, a par-4 that is one of Warrior’s tougher holes, he was 5-up, and it was time to get his championship trophy ready. He ended the match in style, with a birdie on the par-5 13th, the long hole where Fesperman, ironically, had started his charge against Bullock.

“Nick is one of those guys who can shoot 4-under even when he’s not making a lot of putts,” Fesperman said. “He’s so consistent and so solid. I was hoping to make it a better match, a longer match, but I needed to be at my very best to have a shot, and I wasn’t at my best. Still, runner-up in a great tournament like this, I’ll take it.”

Lyerly, 21, was the champion of the North Carolina Amateur when he was 17. He’s won the last two Rowan Amateurs at Corbin Hills, his home course.

But there are always more challenges out there. Next for Lyerly is the North & South Men’s Amateur Championship in Pinehurst, and it’s humbled him in the past.

“That’s a really big tournament and I’ve never even made it to match play there,” Lyerly said.