Ask Us: What is the status of the Empire Hotel project? 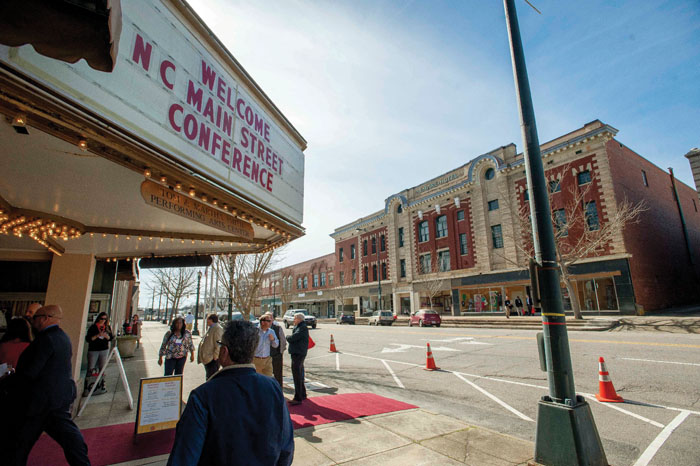 JON C. LAKEY/SALISBURY POST The N.C. Main Street Conference brought people from across the state to Salisbury in 2019 with presentations at the Meroney Theater and tours of the historic Empire Hotel.

SALISBURY — The Empire Hotel has been unoccupied since the 1960s. For about four years, though, its redevelopment has been in the making.

A reader asked what is the status of that process?

For now, Downtown Salisbury, Inc. (DSI) still owns the property. DSI is a nonprofit largely funded by the city that cooperates with the city on various downtown projects, according to Graham Corriher, the attorney for the city.

“The existing agreement has expired according to the time limits that were in that agreement,” Corriher said.

However, “the parties are continuing to work to a new agreement on substantially similar terms,” Corriher said.

There are no material financial terms being negotiated. The remaining issues are about timing and process, Corriher said. Those include how long Weaver will maintain the right to purchase the property and the criteria for the purchase, Weaver said.

“There’s no reason we can’t get through it,” Weaver said about the negotiations.

Weaver says that getting this agreement done will allow him to move forward in seeking the eventual approval for a Housing and Urban Development (HUD) program called 221(d)(4).

“Section 221(d)(4) insures mortgage loans to facilitate the new construction or substantial rehabilitation of multifamily rental or cooperative housing for moderate-income families, elderly, and the handicapped,” states the HUD website about this program.

The program can also apply to single-room occupancy projects.

Essentially, the program is a loan guarantee, Weaver said. As the developer, he will work with a lender for a project. That lender works with HUD, which ensures much of the loan if the application is approved, he said.

“What the developer will really have is a private loan from an investment group that is mostly guaranteed by the federal HUD agency,” Corriher said.

For now, the developer is working with an investment group that has former experience with HUD to create a package that will qualify for the program, Corriher said.

The project has been a long time in the making. Black Point Investments first approached the city in 2016. The proposed development would redevelop the space into 62 market-rate apartments, seven live-work apartments on South Main Street and 13,000 square-feet of commercial space in the former Montgomery Ward space, according to Weaver.

A big part of the process has been getting the financial equation to balance out. That involves bridging the gap between what the construction will cost and what size loans will be available for the property, Weaver explained. So, past years have involved securing programs, credits and waivers to make that financial equation work. All the big pieces are done, Weaver said.

Federal and state tax credits for the property are set, Weaver said.

Locally, the developers have worked with the city and county. That cooperation has included procuring landmark status for the property, which means lower property taxes. The city has also helped with fee waivers that are typical of a deal like this, Weaver said.

“There’s been a lot of boxes checked,” Weaver said. “We’ve made significant progress with getting the financial game in play and having a solution to a very large gap.”

Working to secure the HUD program is also part of that equation. The city’s 10-year master lease on the commercial space in the old Montgomery Ward was part of an effort to make a good application. The city’s provision of 32 downtown parking spaces for the project is also tied to the HUD loan program.

On top of that, “there are so many external processes,” Weaver said, such as underwriting and aligning different incentives, tax credits and benefits for the project. He is unsure if COVID-19 will slow the HUD process down or change the local economy, and therefore any new market studies about the area.

The length of time for the project can be a challenge for everyone involved, Weaver said, but he remains hopeful.

“I remain committed to the deal,” he said. “The team that’s been involved will look back and say, ‘Gosh, that was hard, but it was worth it.'”