Sports obituary: Bill Haggerty was a fixture at Catawba

ADVANCE — William Francis “Bill” Haggerty, who died at 68 on Thursday from cancer, was a born salesman who made his mark in the less lucrative, but frequently more rewarding world of coaching. 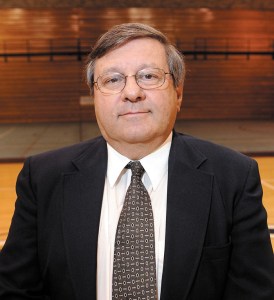 He was a familiar sight as an assistant coach on the Catawba men’s basketball bench from 1987 until 2013, first for Sam Moir, and then for Jim Baker. Six of those teams won conference championships. Seven won conference tournaments.

Many of the standouts on those Catawba teams were recruited by Haggerty. He was hard-working and good-humored, loyal and smart, generous to a fault.

Brian Graves, who starred for the Indians from 2003-07 and is now an assistant coach at North Carolina Central, saluted Haggerty on social media after the news of his death.

“Rest easy Coach Haggerty. Thank you for coming to get me from Newport News and giving me an opportunity to better my life,” Graves said.

Haggerty knew basketball fundamentals and knew restaurants. He liked steak and seafood. He knew the affordable, good places to eat on every Catawba road trip.

Born in New York City in 1951, he grew up in Oak Ridge, N.J. He graduated from Jefferson Township High and  County College of Morris, a New Jersey junior college.

He played basketball and baseball in his younger days, but his best athletic skill was distance running. His favorite athlete wasn’t a basketball player, it was runner Frank Shorter, the American who won the marathon in the 1972 Summer Olympics.

He was out of school for almost six years after he finished at Morris. He trained for marathons and ran nine, competing in marquee events such as Boston and New York.

When he made a decision to go back to school, Haggerty sought advice from Frank Dwornikoski, a legendary coach and guidance counselor in the Jefferson Township schools. Dwornikoski sent him to see Dick Cassels, a Hall of Fame high school football coach in Sparta, N.J. Cassels was a former Catawba tackle who had been drafted by the Washington Redskins in 1957. Cassels recommended that Haggerty take a look at the small schools in the South, and he did.

Two and a half years later, Haggerty had his P.E. degree from Catawba. He did his student teaching in Salisbury at Knox. He graduated from Catawba in 1979.

Haggerty returned home and used his degree to get a job as a recreation director. He coached five different sports at Jefferson Township High.

Haggerty already was a success story, but then he made a leap of faith that changed the trajectory of his life and the lives of a lot of young athletes.

The story goes that he was passing through North Carolina. He stopped off at Catawba to visit Moir, and Moir informed him the head coaching job for the struggling women’s basketball program was open. Catawba hadn’t had a winning season in a decade and had just gone 5-18.

Haggerty actually had three life options that week — keep doing what he was doing  in Jefferson Township, accept a potentially lucrative job offer from a sporting goods chain, or coach the Catawba women for a $3,000 stipend — plus room and board.

He’d been making $37,000 per year in New Jersey, good money in 1984, but he took a massive pay cut for the chance to coach at Catawba. In practical terms that decision made no sense, but it’s a decision he made with his heart, not his wallet. Coaching is what he loved doing.

His first Catawba team in 1984-85 had to forfeit two of its three victories and was officially 1-26.

But then Haggerty had a chance to recruit. His second team was 17-15 and won seven conference games. He was conference coach of the year.

“He spent so much of his own money on us girls, so we could eat after games and wear nice gear,” retired teacher and basketball coach Laurie Corriher said via social media. “He never stopped working.”

Things started looking up for the Catawba women. Haggerty was signing talented players. He was placed in charge of Catawba’s summer camps for basketball, tennis and cheerleading. Those camps brought a lot of revenue to the school.

Haggerty got married in the spring of 1986 to Carolyn Capano, becoming a father to her three young children.

Moir lost his key assistant following the 1986-87 season when Tom Bonebrake took the head coaching job at Hickory High. That’s when Moir asked Haggerty to give up the women’s program and assist him with the Catawba men’s team — and the rest is history.

In 1990, Haggerty was appointed as director of athletic facilities at Catawba.  In 1991, he was named assistant athletic director for internal relations.

“In my observations over the years, no one paid more attention to detail and stayed at a task until it was completed like Bill Haggerty,” said Dennis Davidson, who was sports information director and AD during Haggerty’s years at Catawba. “Bill’s track record as a coach and administrator speaks for itself.”

In 2000, cross country head coaching duties for the men’s and women’s teams were added to Haggerty’s plate. He held that post through 2013.

The numbers for the basketball and cross country teams Haggerty was a part of at Catawba are staggering. He coached in 1,100 events.

He recruited/coached 30 1,000-point scorers in men’s and women’s basketball and seven Hall of Famers.

He prided himself on a 96 percent graduation rate for his recruits. His 2010 men’s cross country team produced the highest GPA in Division II.

And even after his coaching days, he helped raise funds for Catawba behind the scenes. He poured his soul into Catawba.

The Haggertys moved from Salisbury to Advance in 2005.

Haggerty was named as the county AD for Davie in 2016. That would be his final post.

Due to gathering restrictions, there will be a small private service for immediate family only. Details about a celebration of life will be shared once plans can be made.  Arrangements are being made through Hayworth-Miller Funeral Home, and messages of condolence can be left at their home page.  In lieu of flowers please consider making a donation in Bill’s honor to the Cancer Research Institute at this link: https://fundraise.cancerresearch.org/BillHaggerty or contact the Development Office at Catawba College (phone: 704-637-4394; email development@catawba.edu) in order to make an earmarked donation to The Bill and Carolyn Haggerty Endowed Scholarship.