Sports legends: No boundaries for Rankin 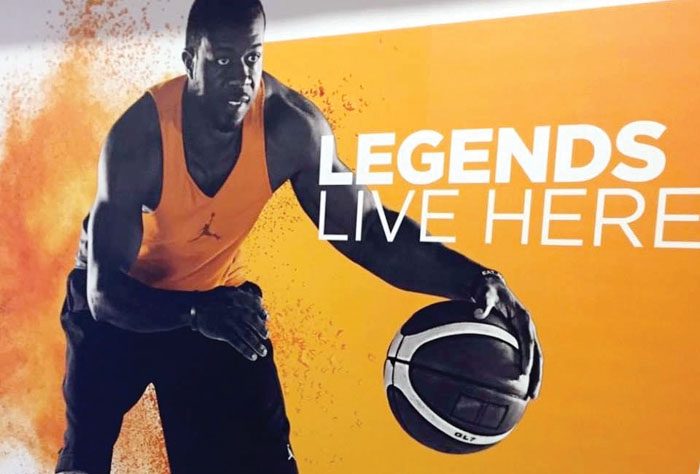 CLEVELAND —There are three murals on the walls in Abu Dhabi, capital city of the United Arab Emirates, honoring and saluting visits by trainer/coach Tristan Rankin.

When you’re a kid from Cleveland, 14 miles west of Salisbury, you don’t expect to fly 7,000-plus miles to teach basketball, but hoops is a truly international game.

Rankin, a 2003 North Rowan graduate, had hoped to play overseas after his college career ended, but an ACL injury set him back. Potential chances to break into pro ball in Germany and Iceland turned into disappointing near-misses.

But he did make it overseas as an instructor.

“I had a fantastic experience working with the kids in Abu Dhabi,” Rankin said. “They were so eager to learn the game. There’s a lot of love and respect for American basketball players.”

“Boundaries mean nothing” and “Make your destiny” are the slogans accompanying the murals of Rankin as he rises to uncoil a textbook jump shot. Shooting is always what he did best.

Rankin’s father, Jerry Kerns, passed away last month. He was a graduate of East Spencer’s Dunbar High, served in the Air Force, and became a carpenter.

“I’ve got a picture of him when he was young, playing basketball in Vietnam,” Rankin said.

Rankin figures he got a lot of his basketball ability from his mother, Jeanette Rankin, who played four years of varsity ball for West Rowan in the 1970s.

There are a lot of ballplayers in the family. Rankins, Siffords, Halls.

Josh Hall, who turned down a scholarship at N.C. State and hopes to hear his name called in this year’s NBA draft, is one of Rankin’s cousins.

“Growing up, I heard all about the family, and there were expectations I’d be a good player,” Rankin said.

His mother emphasized academics, so school work had to take priority when he was growing up.

Rankin did everything right growing up. He sang in the youth choir at Third Creek AME Zion Church and ushered on Sundays.

He excelled in the classroom and for North Rowan’s tennis team, but he had to wait his turn on the basketball court. He believed he was ready to help the varsity when he was a sophomore, but the Cavaliers had a powerful senior class in 2001, led by East-West All-Stars Bryan McCullough and Marcus Reddick, and went 27-1.

So Rankin didn’t make his varsity debut for coach Kelly Everhart until he was a junior. It was only OK, not spectacular. He averaged 9.1 points and was the No. 3 scorer on a 13-15 team, behind Lamar Geter and future Catawba football player James House. Rankin did pick up the pace in Central Carolina Conference play in January and February and scored a season-best 19 in a CCC tournament loss to West Stanly. Rankin scored 10 as North stunned Monroe in the first round of the 2A state playoffs in overtime, but that season ended with a blowout loss at Cummings.

There was a transformation for Rankin between his junior and senior seasons.

He spent part of that summer as one of the J.C. Price American Legion Post’s delegates to Tar Heel Boys State. He spent other parts of it hearing from coaches and teammates that he was counted on as a leader for the 2002-03 season. Geter and House were gone. If North was going to be competitive, Rankin had to be better.

“I learned how important confidence is,” Rankin said. “When you know people are counting on you, are looking to you, it makes a difference. I started shooting more and shooting with more confidence.”

The 6-foot-3 guard scored 20 or more points nine times as a senior. He had 28 against West Iredell and 27 against East Rowan. He scored 21 to lead a tight win against Salisbury and Shamari Spears. He averaged 17.7 points to lead the Cavs. He was North’s representative on the All-CCC team and on the All-Rowan County squad.

Rankin’s next stop was St. Andrews College in Laurinburg, where he hoped to play for future Catawba head coach Rob Perron.  It didn’t work out. Rankin still had some growing up to do. The A student became a slacker.

“I was on my own for the first time in my life,” Rankin said. “My mom wasn’t there to push me, and I didn’t go to class very often. I’d just sit in my room and play video games all day long.”

When he received his grades for the semester, his GPA was a dismal 1.2. He wasn’t surprised.

“My mom wasn’t even mad at me, just disappointed,” Rankin said. “She told me I was grown and it was up to me to get it done. I made up my mind to turn things around in school.”

Rankin had dug a hole at St. Andrews and had worn out his welcome. He needed a fresh start.

He got a tryout at Johnson C. Smith on the recommendation of his best friend, Darren Ramsey, who had played on great Mike Gurley-coached West Rowan teams before heading to J.C. Smith.

J.C. Smith coach Steve Joyner liked Rankin, but leveled with him and told him playing time might be scarce, considering the players the Golden Bulls had signed. But Joyner opened up another door.

Joyner’s brother, Buck, was the head coach at St. Paul’s College, one of the smaller outposts in the CIAA with about 750 students. It was basically in the middle of nowhere, 11 buildings on rolling green hills in Lawrenceville, Va. Buck was far more desperate for players than the Golden Bulls were. Rankin had barely heard of Saint Paul’s and it was 189 miles from Salisbury, but he was equally desperate.

“The next day, Marcus Mitchell (who had played at North Rowan and West Rowan) and I were headed to St.Paul’s,” Rankin said. “Marcus’ dad (Coach Andrew Mitchell) drove us up there. We shot some and then we played in a scrimmage game. After that game, Coach Joyner said, ‘Sign both of them.’ Crazy story, but that’s how I got to play for St. Paul’s.”

Rankin’s third game for the Tigers came in a November Tip-Off tourney in Charlotte in November, 2004. The opponent was Winston-Salem State.  Rankin played against his cousin, former West Rowan standout Terris Sifford. Rankin made five 3-pointers, went 7-for-8 from the foul line and scored 24 points. Saint Paul’s was still routed, however.

“We didn’t have depth,” Rankin said. “There were a lot of games that year that we led at halftime or were close at halftime, but we’d wear out in the second half.”

The next night of the tournament, Saint Pauls took on J.C. Smith.

There was a game in January, 2006, in which Saint Paul’s nearly won at East Carolina, which had former North Rowan star Larry Dixon on the coaching staff. Saint Paul’s led by nine at halftime and maintained the lead until the last three minutes.

“Saint Paul’s isn’t going to get any calls at East Carolina,” Rankin said. “I remember one of the security guys there telling me after the game it was the worst officiating he’d ever seen. But we came close. We did beat Kennesaw State that season, and what was after they went Division I.”

There was a 75-74 loss to N.C. Central at Bobcats Arena in 2007 that still haunts Rankin. Saint Pauls led by two points with 37 seconds left.

“We were getting back on defense (after a missed free throw), and I picked up the guy (Chris Mayshack) with the ball,” Rankin said. “I heard my teammate yell that he had him, so I released him. That’s when he pulled up and made the 3-pointer that wound up beating us.”

There were some scheduling quirks, so there was only one trip home for Rankin to play Livingstone at New Trent Gym. That was in 2005, when the Blue Bears had a solid team, and St. Paul’s didn’t. A lot of fans had come to see Rankin and Mitchell. Rankin got to play all 40 minutes, but he had one of the worst shooting games of his college career.

He was a lot better in 2006 when the Blue Bears visited Lawrenceville. He made three 3-pointers and scored 18 in that one.

Saint Pauls had a respectable team Rankin’s senior year, but that was also the year he encountered medical issues.

“I actually had a mild stroke in February and was hospitalized for five days,” Rankin said. “A week after the stroke, I was cleared to play. It was our Senior Night and the opponent was Livingstone, and my mom took me back to school. I went to the gym to see the guys and I was shocked to see them on the floor shooting and getting loose. I didn’t know what was going on, but they had flipped the men’s and women’s games.  The men were playing first.”

In storybook fashion, Rankin had one of his greatest games. Saint Paul’s shot 56 percent and beat the Blue Bears, 99-90. Rankin went 9-for-9 from the foul line and made two 3-pointers. He scored 19 of his 23 points in the second half.

He made the All-CIAA team his junior year.

“That ended a drought for Saint Paul’s,” Rankin said. “They hadn’t had one for a long time.”

He made the CIAA’s All-Academic team twice. He completely turned around his shaky academic start in college and became a Dean’s List student. He had a 3.7 GPA during his days at St. Paul’s and was listed in Who’s Who Among America’s Universities and Colleges.

Graduation day for Rankin was May 11, 2007. He received a bachelor of science degree in mathematics with a minor in computer science.

He’s had assistant coaching stints at North Rowan, Salisbury and Livingstone. He also buried a lot of jumpers for the semi-pro Rowan Bulls.

When he graduated, he states his goals were to become an entrepreneur and to travel internationally. He’s accomplished those goals. At 35, he’s a self-employed trainer who stays in shape with long bike rides.

And as far as traveling internationally, there are three murals in Abu Dhabi that prove he’s been to the other side of the globe.

Local golf: Barr made quite a run