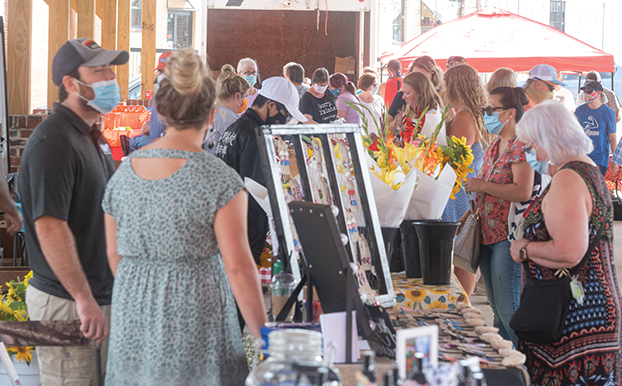 SALISBURY — Rowan Countians started masking up Friday as a new state mandate went into place requiring face coverings in public to prevent the spread of COVID-19.

A majority of the more than 100 of readers who responded to a Salisbury Post online survey with written comments said they will follow the mandate. Two of three grocery store chains in Salisbury responded to a Post request saying they would encourage customers to wear face coverings. Law enforcement agencies, meanwhile, were sorting through the specifics of the mandate on Friday, with one saying issuing fines and penalties will be a low priority.

Gov. Roy Cooper announced the face covering mandate Wednesday along with an extension of phase 2 of reopening for three weeks. That announcement keeps in place existing restrictions and business closures while also requiring face coverings in retail businesses, restaurants, child care facilities, state government, high-density workplaces, meat or poultry processing plants and long-term care facilities. Personal care, grooming and tattoo businesses are included, as are public and private transit, such as trains and airplanes, but not private vehicles.

His order specifies a list of 11 exceptions, which include people with medical conditions, those younger than 11, people exercising and those actively eating or drinking. Morgan Ridge Railwalk Brewery and Eatery in Salisbury, for example, told customers that masks were required when entering and moving throughout the business and can be removed when seated at a table.

Rather than individuals, the order focuses on penalizing businesses or organizations that fail to enforce the mandate. If someone is asked to leave a business, they can be charged with trespassing if they don’t comply.

“I would say it’s a balancing act between personal freedom and the health and well-being of people, and each business is going to have to figure out that balancing act,” said Convention and Visitors Bureau CEO James Meacham, whose organization is one part of the county’s COVID-19 Economic Recovery Task Force. 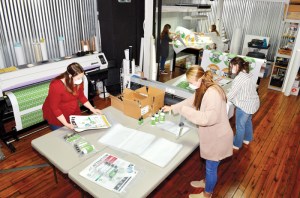 Photo submitted – Employees of Miller-Davis in Salisbury prepare COVID-19 local business kits that have been distributed for free.

Caroline Stephenson, who lives in Salisbury, said her family plans to continue to wear a mask whenever they’re out in a public space.

“It is a negligible inconvenience. We must work together with collective interests in mind so that schools can eventually reopen,” Stephenson wrote in response to an online survey.

Sam Post, who also lives in Salisbury, said wearing a mask is a no-brainer.

“Opposing masks is a different kind of no-brainer. What an absurd controversy,” Post said.

Asked about enforcement, Salisbury Police Chief Jerry Stokes called the mandate’s details inconsistent and confusing, saying he does not plan on enforcing it strictly against businesses unless there are repeated violations. Stokes said businesses that could face penalties are already suffering economically.

“Being a civil fine only, it will be a low priority for the police department as we focus on crime prevention activities in the city,” Stokes said.

Rowan County Sheriff Kevin Auten said his agency cannot charge individuals with a criminal offense and that there’s no need to call law enforcement about the order unless it becomes a trespassing issue.

Walmart spokesman Charles Crowson said the store will encourage customers to be mindful of one another and “adhere to recommendations and decisions made by local officials about the use of protective facial coverings in public places.”

Emma Inman, Food Lion external communications director, said associates will wear masks while working and that the store asks customers to do so, too.

“We will communicate the order’s mask requirements through signage in each of our nearly 500 stores in North Carolina, and via regular in-store announcements,” Inman told the Post. “We will also respect the needs of our customers who are exempt from the order’s requirements. We will continue to follow professional guidance and take action to provide a safe and sanitary environment for our associates and customers.”

Neither Crowson nor Inman commented about how and when the store might call law enforcement or ask customers to leave. 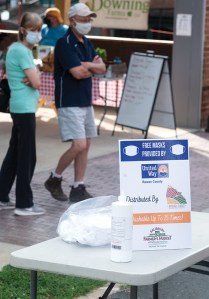 Josh Bergeron / Salisbury Post – Free masks and hand sanitizer were available at the front entrance to the Salisbury Farmers Market on Saturday.

Skeptics of the order include Salisbury resident John Lentz, who said he believes social distancing is good enough. Lentz said he plans to follow the governor’s order but thinks “it is ridiculous.” Lentz said the governor is not setting a good example or wearing his mask on a regular basis.

“If you maintain your distance, why should you be forced to wear a mask?” Lentz wrote to the Post.

Salisbury resident Melaine Miller said the order is not about politics but that people are making it so.

“It’s about health. It’s about taking care of one another. It’s not a hoax. It’s not like the flu,” Miller said.

Miller also noted that more people have died in the U.S. from COVID-19 this year than the average number of flu deaths.

“Just like we wear seatbelts to protect ourselves, we need to wear facemasks to protect one another,” Miller said. “It’s not asking a lot.”

Mandy Tew, of Salisbury, said she hasn’t worn a mask during the COVID-19 outbreak because it’s her right to do so.

“I do not feel endangered by a weak virus. I do not believe the numbers due to the money hospitals gain saying the deaths are caused by COVID,” Tew said. “The media has done its job by scaring people. I am not scared. My child is not scared. The death rate is almost zero. Why do we keep this up? Impeach Cooper. Bring back our freedom.”

Rockwell resident Amy Goins said she doesn’t think anything will make the virus go away.

“We can’t isolate ourselves to recovery,” Goins said. 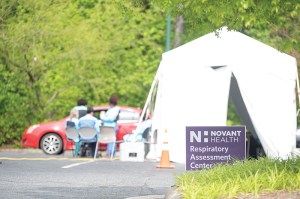 In Rowan County, 42 people have died after testing positive from COVID-19, with an increasing number coming outside of nursing homes. Daily case numbers have increased in conjunction with expanding testing, but health officials say testing alone is not responsible for the rise. By Saturday, more than 1,100 people had tested positive in Rowan County, which included 282 active cases.

Danielle McDowell, who lives in Salisbury, said that washing hands and not touching your face are steps that will be more effective than wearing a mask. Health officials, though, are encouraging people to wear a facemask in addition to washing their hands regularly with soap and water and staying 6 feet apart from others.

Caleb Garner, of Hattiesburg, Mississippi, and formerly of Salisbury, responded to the Post’s survey by saying he hopes that his friends and family in North Carolina realize that “staying healthy keeps us free.”

“The stakes are too high to let petty politics and selfishness ruin our judgment,” he wrote.

Among respondents who said they supported the mandate, most also added that they were surprised or “appalled at the amount of people refusing” to wear masks. Salisbury resident Stephanie Roseman was one of them.

“Particularly in the South, everyone is so proud of their guns and southern hospitality, but yet when we are being called to do something so simple as to wear a mask it is considered ridiculous,” Roseman wrote. “My thoughts and opinions are based on science and Jesus. I will always choose data over convenience and I will always choose kindness over hate.”

Just as people who disagreed with the mandate directed complaints at Gov. Cooper, a number of those who support it told the Post they were thankful for the governor’s decision. Salisbury resident Chris Sharpe was one of them, saying he admires the commitment of the governor to follow science.

“Thanks to the governor for maintaining his stance and shame on the Republican gubernatorial candidate who is trying to concern himself with businesses and not the people,” Sharpe said in a reference Lt. Gov. Dan Forest, who has threatened to sue over gubernatorial executive orders. “The courts are for serious concerns, not the frivolous lawsuit that he threatened to file.”

Salisbury Resident Dottie Hoy said people “are going to hate being on a ventilator” if they don’t like wearing a mask. If people don’t abide by the order, parents could end up homeschooling their children in the fall. I don’t think anyone is excited about doing that, Hoy told the Post as she walked around with a mask on at Saturday’s Salisbury Farmers Market.

Sports legends: No boundaries for Rankin