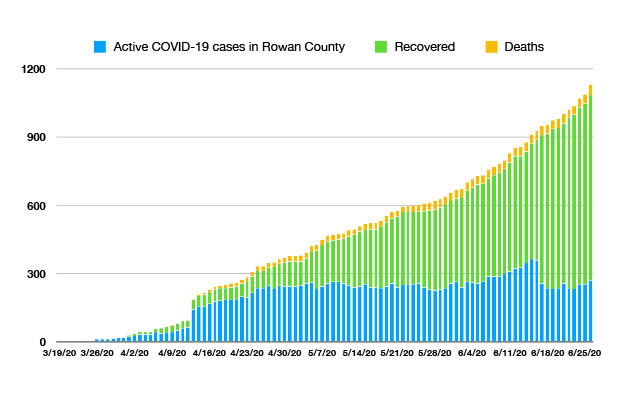 This chart shows the progression in the COVID-19 outbreak in Rowan County. The blue section of the bar chart indicates active cases, while the green section shows recoveries. Yellow is deaths.

SALISBURY — One additional Rowan County resident who’s not affiliated with a congregate care facility has died from COVID-19 and another nursing home is the site of an outbreak, according to the Rowan County Health Department.

Of the 42 deaths, 21 have been from the Citadel, 15 have been from the N.C. State Veterans Home and six weren’t associated with a congregate care facility. The average age among the death is 82. Meanwhile, the total number of cases at congregate care facilities rose to 237 on Saturday after six employees of the Community Living Center on the campus of W.G. Bill Hefner VA Medical Center, a VA nursing home, tested positive.

The Community Living Center, while a nursing home, is separate and operated by different personnel that the N.C. State Veterans Home, which is also on the Salisbury VA campus and the site of a COVID-19 outbreak.

An additional 39 people tested positive for COVID-19 on Friday, the second-largest increase since COVID-19 came to Rowan County. Ten more people were reported positive Saturday. Those increases bring the total positive case count to 1,139. Of those, 282 are currently positive.

Ahold Delhaize USA, which owns Food Lion, also said each associate that has tested positive indicated no close contact had occurred with other associates at the distribution centers.

“As part of our associate contact tracing reporting process, there is no indication that any of the 13 associates contracted the virus at work,” the company’s stated. “Our thoughts are with our associates who are home recovering, and we wish them a speedy recovery.”

The Ahold Delhaize spokesperson also said facilities have ongoing, rigorous sanitary and deep cleaning practices every day that have been expanded during the pandemic. Additionally, associates are provided masks and temperatures are taken during work.

Also on Friday, a spokesperson for Daimler Trucks confirmed a total of eight employees have tested positive for COVID-19, not including one positive case from April.

At least 6,330 tests have been conducted in the county. A total of 15 people are currently being hospitalized.

Statewide, a total of 60,537 cases have been confirmed after 855,131 tests have been completed. A total of 888 residents across the state are currently being hospitalized, and 1,318 have died.

On Friday, state officials announced the state’s COVID-19 dashboard, available at covid19.ncdhhs.gov, will now include more county data on trends, demographics and testing, along with a new report on COVID-19 clusters in child care and school settings.

Previously, testing data by county was not available on the state’s website because a large proportion of negative tests were reported manually and did not include county information, said a news release from state health officials.

“With more tests now being reported electronically with county data, there is now sufficient data to reliably share the percent positive by county,” a news release said.

Additionally, a biweekly report on COVID-19 clusters in child care and school settings will be part of the state data. A cluster is defined as both a minimum of five cases in the same facility within a 14-day period and plausible epidemiological linkage between cases. The report will include the facility type, county and the number of cases and deaths among staff and children.

In other local statistics: