A cabbage for your thoughts: elementary student is tending his own patch 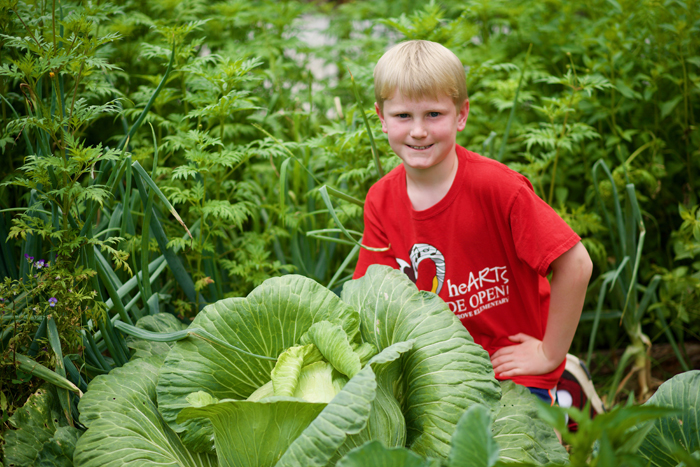 The soon-to-be China Grove Elementary School fourth grader has an affinity for other produce. He likes fruit. He claims raspberries are the healthiest food in the world and he likes tart blackberries, but when it comes to cabbage he is happy to give it away.

Bostian picked up gardening from his grandmother, Betty Corriher, who has enlisted him and his sister Reese, a rising second grader, to help with weeding, tying vines and all the minutiae that comes with tending a garden.

Griffin has helped grow sweet potatoes, green beans, corn and other veggies, though this is his first experience with cabbage. He likes gardening, but said sometimes it is so hot outside he feels like he could burst into flames and disappear. He also does not like how long it takes to grow things.

In a departure from some of his favorite produce, Griffin is now tending his own small cabbage patch in Corriher’s yard. He was introduced to the ubiquitous vegetable in March through school and the seedlings were provided by Bonnie Plants as part of the company’s third-grade cabbage program.

The program gives kids the chance to win a $1,000 scholarship if they produce what is judged as the best in the state based on size and appearance. Griffin was only expecting the one seedling, but he was given six, and several of them grew. He decided to donate two heads to local nonprofit Main Street Marketplace with a third on the way.

According to Bonnie, the contest is cabbage-themed because it was the first profitable plant for the company in 1918. The variety given to students is known for its jumbo-sized heads. The heaviest contest entry was 75 pounds. The seeds for the program are donated by American Takii Seed Company.

Griffin’s leafy project has had a few bumps in the cabbage patch as well. One plant became infested with a fungus, and another plant has a head on the way, but it is playing catchup with its faster-growing brethren.

Corriher said they planted all cabbage and were uncertain if any would grow because of how inconsistent the spring weather was this year as temperatures jumped from unseasonably hot one day to chilly the next.

Griffin monitored the plants every day. He watered them, fertilized them and protected them from frost.

Corriher said Griffin was not happy when he gave away the first one, that it was like watching him give away a member of the family, but the folks at Main Street Marketplace made him feel so good about sharing the cabbage he walked away happy.

Griffin said he learned about the importance of investing time and effort into a project. He made the savvy decision to recruit his grandmother for the cause because he has the expertise he needed.

Griffin’s favorite subject is math. He said he likes numbers, and Corriher commented on his ability to perform multiplication and division in his head.

“It makes you get entertained, basically,” Griffin said.

Despite his love of math, he still wants to be either be a football or basketball player.