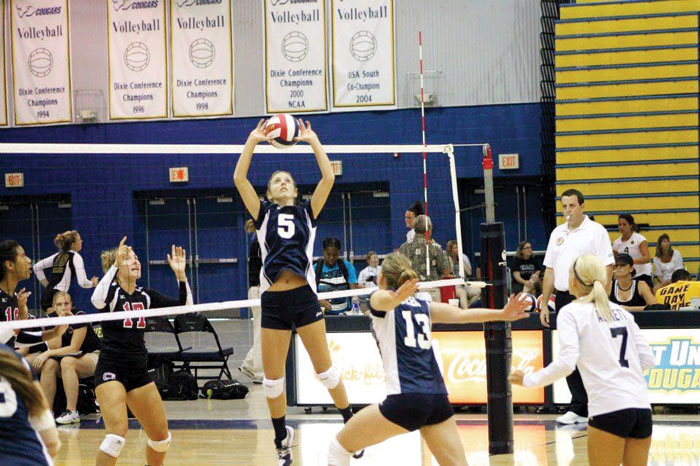 submitted photo Nicole Barringer, 5, sets during a game for Averett.

People her age are usually applauding for one of their parents — or grandparents — at Hall of Fame ceremonies, not being inducted at them.

“Well, I didn’t think I was old enough, either,” Barringer said with a laugh. “But they called a few weeks ago.”

Barringer is the head volleyball coach at William Peace University in Raleigh, where her teams have been 48-14 the past two seasons. Since she coaches in the fall and since the Hall of Fame induction ceremony is scheduled for Oct. 17 on a home football Saturday, Barringer had to make a schedule adjustment for her team, but everyone has been cooperative.

“William Peace and Averett are in the same conference, so everyone wanted to help,” Barringer said. “Instead of playing on a Friday and Saturday, we’ll play Friday afternoon and Friday night. Then I’ll head to Averett (in Danville, Va.) for the ceremonies on Saturday. There’s a banquet, and then we’re also recognized at halftime of the football game.”

The volleyball teams that Barringer coaches now are made up very solid athletes who also are A students.

“There’s a lot less stigma now as far as going D-III then there when I was coming out of high school,” Barringer said. “I had a few D-II offers and a lot of the girls I played with at Averett had D-II offers. One of them turned down D-I schools because Averett was the best fit for her. The important thing, no matter what level you’re coaching at, is finding girls who want to win and who want to be good teammates. We’ve got 11 good recruits coming in.”

Barringer came through the Rowan schools long before volleyball became a middle school sport here. Girls such as Barringer, who were good athletes, usually concentrated on basketball or softball.

Barringer would make all-county teams for South in softball and basketball — she was the Raiders’ leading scorer her senior year — as well as volleyball.

But softball was her thing for a long time.

“I was playing softball for a travel team outside of Fort Mill, S.C.,” Barringer said. “Some of the girls on the team were talking about volleyball, and I was like, ‘What’s that?’ ”

Basketball is a winter sport. Softball is a spring sport. When Barringer arrived at South Rowan High as a freshman, it seemed like a long wait until basketball season, and she wanted to stay active.

“People asked me what I was going to do, and I thought maybe it would be cross country,” Barringer said. “But I decided to try volleyball.”

Her father joked with her that she just wanted to play a sport he didn’t know anything about.

When she got started on South’s jayvee team, she didn’t know all the rules either. Not at first.

Barringer is taller than average (5-foot-9), so she was used as an outside hitter.  When the jayvee setter broke her thumb, Barringer tried it. She had the hands for it and liked it because no one touched the ball more often than the setter, but it was trial-and-error for a while.

“I went home a lot of days with bruised arms,” Barringer said. “I never did develop a great volleyball swing, but I showed some potential as a setter. Coach (Jan) Dowling was at South then and she pushed me hard. That was important.”

South had an experienced setter (Krista Haywood) when Barringer was a sophomore on the varsity squad, so she returned to being an outside hitter.

In the interval between her sophomore and junior years, she threw herself into the game and found out how much she loved it. The motivation for all that work was the chance to be South’s starting setter for two seasons.

“I loved the pace of volleyball, compared to softball,” Barringer said. “By the end of my junior year, I knew my focus should be on volleyball. That was the sport I was going to play in college.”

Her senior year, there were a couple of D-II offers from schools in North Carolina, but Averett coach Danny Miller was someone she already knew well through club volleyball, and Averett had a good D-III program. So that’s where Barringer went.

As a senior, she was All-South Region and Honorable Mention All-America and finished fifth nationally in assists. She was on the All-USA South team four straight seasons and made the first team twice.

As a senior, she was Averett’s Female Student-Athlete of the Year. She received the two biggest awards for female athletes in the USA South Conference, as the conference’s student-athlete of the year and USA South Woman of the Year.

“I had some good stats on the court and some well-roundedness off the court,” Barringer said. “But no one makes it to a Hall of Fame alone. I had so many great professors, coaches and teammates who made all the difference.”

Barringer was a graduate assistant with Averett volleyball for two years, as she earned her masters in business administration.

She came home to be an assistant coach at Catawba in 2017 . In January, 2018, she was announced as the new head coach at William Peace, where she’s had back-to-back strong seasons.

There’s a five-year waiting period for Hall of Fame induction at Averett. Barringer didn’t have to wait very long.

“It’s an honor,” Barringer said. “Averett has had a lot of athletic success, especially in golf and volleyball.”

Barringer said her William Peace players sent her a lot of texts as word spread about her Hall of Fame status.

“I’m usually hitting or passing in practice, and those are things I’m not great at,” Barringer said. “They were a little surprised to find out I was a pretty good player.”

“I made the right college choice,” Barringer said. “I”ve been blessed. I live in a great city and I’ve got my dream job.”