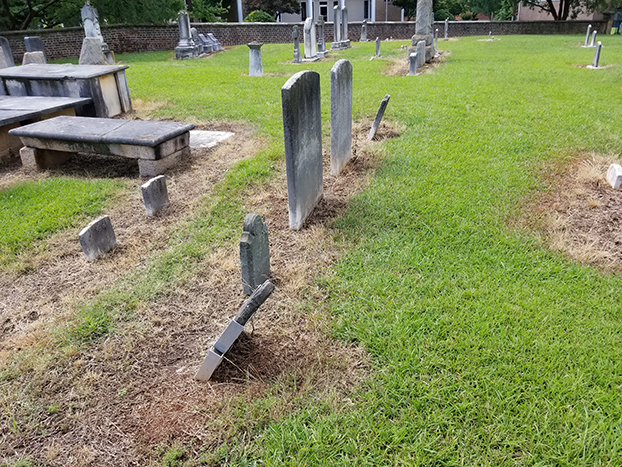 Photo submitted - This photo shows gravestones inside of the Old Lutheran Cemetery. The Confederate monument 'Fame' is scheduled to be moved here.

Recent discussion on the fate of the “Fame” statute has centered on its proposed relocation to the historic cemetery at 501 N. Lee St., within sight of the Historic Salisbury Station. There are many emotions involved in relocating “Fame” and my purpose is not to address those here. Rather, I’d like to provide a brief background of the cemetery and point out several items of concern regarding the relocation and the preservation of the statute.

The cemetery began upon the untimely death in 1768 of the young daughter of John Lewis Beard, a wealthy landowner and follower the Lutheran faith. There being no Lutheran cemetery, Mr. Beard chose to bury his daughter on property he owned on North Lee Street. In order to protect the site over the years to come, he transferred the deed for this property to the “German congregation” for the purpose of developing a graveyard around his daughter’s grave and the eventual building of a church structure there. Soon thereafter, the city’s first church structure by was indeed built there, made of simple logs and the Lutherans’ first pastor arrived from Germany about five years later. (The church was later also used by the Episcopalians and Presbyterians who did not have church structures of their own.)

The congregation would go own to adopt the name of St. John’s Lutheran, which continued to own the property until it was transferred in 1980 to the city. At that time, the city agreed to assume responsibility for ongoing maintenance of the property, to include lawn care, landscaping, repairing of gravestones and the wall surrounding the cemetery as well as implementing desired enhancements.

Unfortunately, over the years, the cemetery has fallen into disrepair. Some may recall that a number of years ago, Sonny Allen, the elderly former mayor of Salisbury and a member of St. John’s, undertook the tremendous task of personally repointing the mortar along the entire length of the cemetery wall. An inspection earlier this year revealed that the mortar has once again deteriorated and the wall has become unstable due to multiple tunnels dug underneath by groundhogs and several sections of broken cement capping. Discussions with city staff revealed that dedicated funds for maintenance of the cemetery are not currently allocated in the city’s budget and hasn’t been so for many years.

If indeed “Fame” is moved to the historic cemetery, the city must fully dedicate itself to the repair and ongoing upkeep of the cemetery walls, tombstones, etc., and must improve the lot to be comparable with the Old English and Dixonville cemeteries. Significant investment must be forthcoming to properly interpret Fame to recognize all Rowan County citizens who have fought for freedom and civil rights and to tell the statute’s complete story to ensure the education of those who will follow us. Most importantly, though the statute may be removed from the center of the city, it will also be in a less visible and, therefore, less secure location. It is essential that sufficient lighting and security systems be installed to protect and preserve this landmark.

If given sufficient focus and dedicated, indefinite funding, “Fame” at the historic cemetery may become another of the city’s “must-see” historic sites, while also serving notice that Salisbury recognizes its past indiscretions and is dedicated to becoming a welcoming city to all, regardless of race.