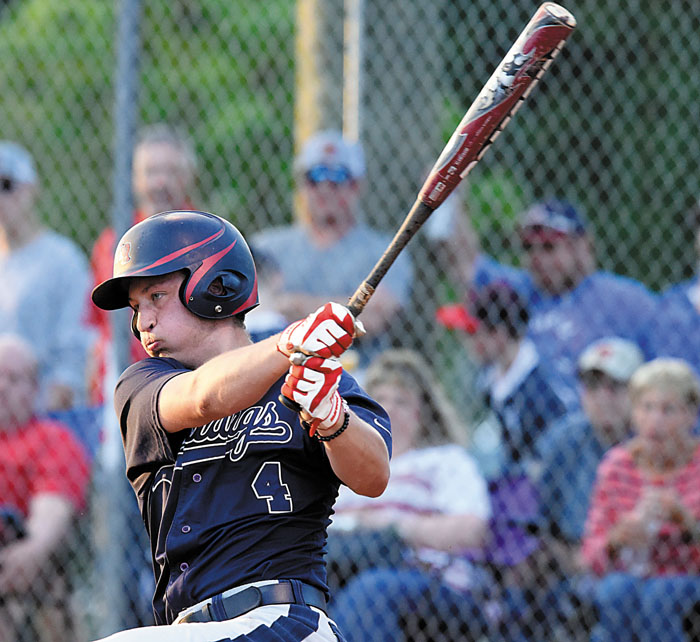 SALISBURY —Rowan County’s NC3 baseball team was rained out on Saturday at Newman Park, so Wayne Mize’s much anticipated return to the diamond was put on hold for at least one more day.

Mize, a recent East Rowan graduate, was enjoying one of the strongest starts in Rowan high school baseball history when the season was halted in mid-March by COVID-19 concerns. He was batting .562 with five homers and 16 RBIs — after six games.

“I was just seeing it so well,” Mize said. “It’s hard to put into words what it was like having my senior year cut short like that.”

“At some point, Mize is going to do some great things,” Hatley said. “He’s a Corey Seager/Kyle Seager kind of hitter.”

Over the years, the sound of a bat in a mighty hitter’s hands when he squarely connected with a baseball has frequently been described in military terms — like a cannon, mortar fire, a rifle shot, a shotgun blast or an explosion.

Hatley brought new life to that subject with an interesting crack-of-the-bat analogy.

“When Mize hits it solid, it sounds like a car crash on I-85,” Hatley said. “We had deep-run possibilities for the playoffs this year. We had great pitching, and this time, with Mize and Charlie Klingler and some good young guys, we had the offense to back that pitching up.”

Mize also was off to a spectacular start for East when he was a sophomore cleanup hitter. His first eight hits of the 2018 season included three doubles and three homers. He had 15 RBIs in his first 31 at-bats.

He finished that season — high school seasons aren’t long — with seven homers and a .418 batting average. He produced 39 RBIs, 16 more than any other Mustang.

Mize’s junior season at East started with him still in the dugout, trying to get back on the field after breaking his nose in five places in a February outfield collision. He did make it back, although he never really found his stroke. He only hit three homers.

Mize’s debut with Rowan County American Legion in the summer of 2018 went quite well. He batted over .300 with five homers and 12 doubles.

In the summer of 2019, he led Rowan County in RBIs by a lot with 45. He only hit three homers, but he had 13 doubles and two triples and a .421 batting average. Pitchers worked carefully to him and pitched away from him, but he showed he could line singles to the opposite field.

Mize is sturdy at 6-foot-1, 195 pounds. He runs well and has a strong arm, but what makes him special is what he does in the batter’s box.

“It’s hard to fool him,” Hatley said. “His first homer this season was on a breaking ball. He has great timing and he has great balance. Even if you do fool him, his balance is so good that he still can hit it hard. I’ve been at East eight years, and I haven’t seen anyone like him.”

Mize’s five homers in the high school season don’t count the one he launched in a preseason scrimmage.

In East’s game against Cox Mill, Mize mashed a two-run homer in the first inning and a grand slam in the second. Two innings, two swings, six RBIs.

That led to the ultimate respect, an intentional walk for Mize with the bases empty.

But some teams still pitched to him. In what would  prove to be East’s last game of 2020, Mize slugged two more homers against Mooresville.

“They’ve been talking to me since I was a sophomore,” Mize said. “The coach is a good guy, and they win. I wanted to go somewhere where they’re winning. It felt right. It’s a good fit for me.”

Mize was primed for his biggest American Legion season this summer, but the pandemic and safety concerns led to the cancellation of the season.

“I’ve been hitting every day for months,”Mize said. “I’m excited about getting back out there.”

The Rowan NC3 team will basically be playing in front of 25 parents, although there’s some hope that will change on June 26.

The concession stand will be open at home games for fans who want to drop by and make a purchase to support the NC3 baseball program. The program will face travel, umpire and facility expenses, so it will be a financial struggle without the standard army of fans at Newman Park.

Games will be broadcast by WSAT 1280.

East had the potential for amazing pitching with East Carolina commit Jake Hunter and Cameron Padgett, who is being recruited by D-I schools. They’ll both be back in 2021.

East also has a star of the future in 6-foot-5 Chance Mako, a rising sophomore. “I got a call from a college coach who wanted to come watch Mako pitch in a jayvee game, and he showed up at 5 p.m.,” Hatley said. “That was a first.”

Hunter, Padgett and Mako are all part of the South Charlotte Panthers, showcase program.