Sports obituary: Brian Whitaker of North Rowan had strong stretch on the mound 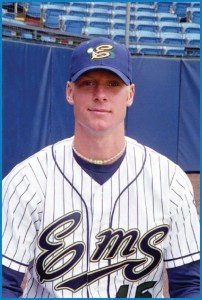 There were 512 in attendance for the Colonial Athletic Association contest. Verlander came into it with a 1.79 ERA.

Whitaker must have known it was going to take his best effort, and he produced one of the best outings of his career. Old Dominion didn’t get its first hit until the sixth inning. That was an infield hit.

UNCW won the game, 3-1. Whitaker, who had graduated from North Rowan in 1998 and had been pitching for Division II Lenoir-Rhyne in 2000, allowed two hits in his seven innings on the mound and squared his season record at 4-4. Verlander, who pitched into the eighth inning, also was 4-4 when that game ended.

Verlander was the second player picked in the 2004 draft. He’s 37 now, owns 225 MLB wins and 3,006 MLB strikeouts and is probably headed to the Hall of Fame.

Whitaker, drafted in the 27th round by the San Diego Padres in 2002, passed away last week at 40. UNC Wilmington baseball announced his death via social media.

Whitaker helped coach Bill Kesler’s North Rowan squad have a winning season in 1998 and made the All-Central Carolina Conference team. While pitching was his forte, he also swung a bat with some power and was versatile in the field. He was a big guy — 6-foot-4 — but he could play first, second or third base or one of the outfield corners.

He had a lot of success for coach Jim DeHart and the Rowan County American Legion team. After his sophomore year at North Rowan, in the summer of 1996, he was 7-1 pitching for the Legion team that won the Southeast Regional as the host team and headed to Oregon for the World Series. His 1997 Legion season wasn’t auspicious, but he came back with a huge summer of 1998.

He won his first nine decisions in 1998 and was one of the key figures in Rowan County’s wild series with King that decided the Area III championship. Rowan had a host of excellent pitchers — Buck Hamrick, Brian Hatley, Rocky Eagle, Chad Walker, Adam Horton, a young Daniel Moore — but it was Whitaker who seemed to be on the mound that whole series. It went seven games, counting a six-inning tie that was stopped by weather.

Whitaker pitched brilliantly in the series opener, nine innings, eight strikeouts, no walks, and Rowan took a routine 8-2 victory. Next came the 8-all tie. When Rowan had to travel back to King again the next night, King won. Then King took an 11-inning victory at Newman Park, pinning the first loss of the season on Whitaker who relieved Walker in the 10th and allowed two runs in the 11th.

After Eagle pitched a complete game to even the series, Whitaker got the last out and the save in a thriller to give Rowan a three games to two lead.

In the series-clinching game at King, aided by two Michael Lowman homers, Whitaker went the distance in a 15-7 victory. Whitaker allowed 17 hits and four walks and struck out eight, so he must have thrown an incredible number of pitches. King left 16 men on base.

In what would be his last Legion outing, Whitaker faced a tremendous Cherryville team in the Western championship series. Whitaker pitched another complete game, with eight strikeouts and no walks. He held Cherryville to seven hits, but two of them left Newman Park. He finished that season with a 10-2 record and 107 strikeouts.

Whitaker still can be found on the all-time Rowan County leaderboard with 19 Legion victories and 184 strikeouts.

Whitaker also fanned quite a few people at Lenoir-Rhyne. In 2000, coach Frank Pait’s Bears won the South Atlantick Conference Tournament. Whitaker led the Bears with 77 strikeouts, including 10 in a game at Tusculum.

Then he transferred to UNC Wilmington, where North Rowan grad Justin Wishon was the left fielder. Whitaker was an all-conference workhorse for the Seahawks in 2001 (first team) and 2002 (second team).

The tough luck continued after the Padres drafted him. He was sent to Eugene, Ore., after he signed and pitched exceptionally well. His 2.93 ERA was the second-best in the Northwest League, but all he had to show for it was a 5-8 record.

His finest season in the minors came in 2003 with the Class A Midwest League’s Fort Wayne Wizards. Working with Fort Wayne’s pitching coach, former Chicago Cubs hurler Mike Harkey, Whitaker’s breaking ball got sharper and his velocity picked up a few miles per hour. His sinker was always his best pitch, and he got a lot of groundballs with it. He located low strikes, got double-play balls and never walked many hitters. He was only 7-6, but he had a 2.09 ERA with 121 strikeouts and only 20 walks in 26 starts.

The Wilmington Star-News named Whitaker as the area’s minor leaguer of the year for 2003.

Whitaker pitched for the Double A Mobile Bay Bears at Hank Aaron Stadium in 2004 and 2005. He won 16 games in Double A and pitched in two games at the Triple A level for the Portland Beavers.

The 2005 season was his final one in affiliated baseball. He won 29 games in the Padres organization. He started 94 games and had a 3.25 ERA and 396 strikeouts.

Whitaker played for the independent Lancaster Barnstormers in 2006. His record was 12-7, but that was the end of the line, as far as pro baseball.