Final cut: Davey Overcash retires after 50 years as a hairstylist 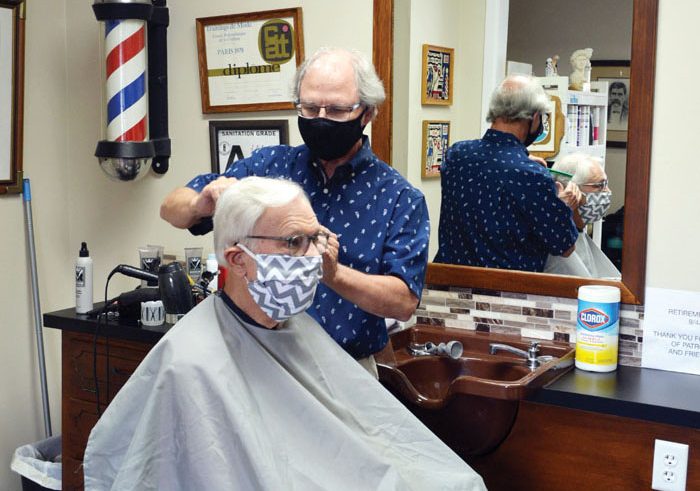 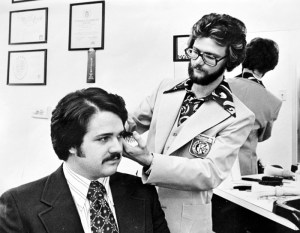 When Davey Overcash, right, was cutting hair in the early 1970s, men’s styles were long and required a lot of styling.

The year was 1964, and the British Invasion had begun. Davey Overcash was a teenager, and boys his age wanted to grow their hair out.

“But the barbers in China Grove would use clippers, no matter what,” he remembers.

Davey knew a hairdresser in Salisbury, a Mr. Bailey, who would do haircuts and a little styling, and he’d leave hair a little longer if his clients wanted it. His parents, the late Brown and Gertrude Overcash, said it was fine with them.

So Davey’s mother took him up to get a haircut, and Davey soon developed an interest in hairstyling. His mom took him to a barber convention in Greensboro and he had a blast. By the time another came around in Durham, he had his driver’s license, and he and his buddy Chip Miller took off.

“It was just awesome,” Davey says.

He and his dad started exploring barber schools in North Carolina and entered Durham Institute of Barbering in September 1968, just after his graduation from South Rowan High School that spring. He recalls that his room and board was $50 a month. He saved up money all during high school, working as a bagger at the A&P. He planned on working with Mr. Bailey, but unfortunately, his friend died.

His first job was with Curtis Call at Elite Barber Shop on West Innes Street where Walgreens is now. He worked there from May until September 1969, when he went to work for June Flowers at his barber shop in Landis.

“That was a good experience,” he says, “but I was wanting to do hairstyling.”

He went to work for Roy Beaver in September 1972, and they went to hairstyling shows all over the country.

“It was just cool,” Davey says.

Finally, Davey went out on his own, opening A Touch of Class in 1978 at 725 S. Main St. — he rattles off the address easily. It took a year of renovation before the former Victorian home was ready. When a friend was visiting one evening, she said, “You know, this is a touch of class,” and Davey had his business name.

It might be hard to believe, but Davey, 70, is hanging up his scissors after more than 50 years as a hairdresser. His last appointment will be Sept. 4 at 5:30 p.m.

Davey appreciates all the training he’s had over the years. He was always learning, he says. “And I had such wonderful employees — dependable and honest and great stylists. Crystal Vanhoy, for example, was with me more than 25 years.”

He added female clients in 1973, when the “shag” was coming into popularity. Barbara Lockert, Lawanda Ford, and Jean Wolfe were among those first customers.

“I’ve seen things come and go and come again,” he says of hairstyles.

He doesn’t name a favorite hairstyle. “But I’ll tell you flat out, the flat top is my least favorite. It’ll make you go blind!”

Sometimes, Davey says, he’ll make subtle suggestions when working with a client on their hairstyle.

He remembers reading a survey that said the most important attribute of a hairdresser is his or her personality. The haircut ranked fourth. Convenience was a factor as well.

“Most of my customers have been with me 35 years on average,” he notes.

He’s spent the last year and a half at Gene Mitchell Hair Design and Hair Replacement on Statesville Boulevard. So he’s wrapping up his career only about 300 feet from where he started, he says.

“His customer base has been super loyal,” says his wife, Ketti. “Everybody likes him because he’s just truly a nice guy, and he cares genuinely for his customers.”

Davey was right out of barber school when he began cutting Craig Sloop’s hair.

“I kinda followed him around wherever he went,” Craig says. “He always cuts my hair the way I want, and he still uses a razor cut. I’m gonna miss him.”

Charles Goldman has been going to Davey since about 1972.

“He’s a very congenial, kind person,” Charles says. “We just hit it off.”

Charles has his hair and beard trimmed every two weeks.

“I like to keep my beard fairly short,” he says. “I never have tried to do it, and I never asked my wife Norma to do it. He takes his time with it and does it good job.”

Mary Goodman is also a longtime client. She used to wear her hair long, but when she started getting it cut regularly, she went to Davey. That was 45 years ago.

“He’s wonderful,” she says. “He puts up with me if I have to change things.”

She has her hair cut every five weeks, she says. “He does it the way I like it. We talk our way through appointments. All of our five children went there. He’s just a fine, kind person — the kind of person you like to be around, and I will miss him very much.”

Davey and Ketti met in 1985, and he has cut her hair ever since. They have a daughter, Ivy, 30, a high school chorus teacher in Duluth, Ga. Davey cut his daughter’s hair until she moved out of town.

Davey and Ketti hope to travel to Amsterdam and Germany in 2021, a trip they’ve had to postpone from this spring. While there, they plan to visit Oberkirsch, the Overcash family’s ancestral home.

Davey kept the same career for so long, he says, “because I love it. I’ve had some great customers.”