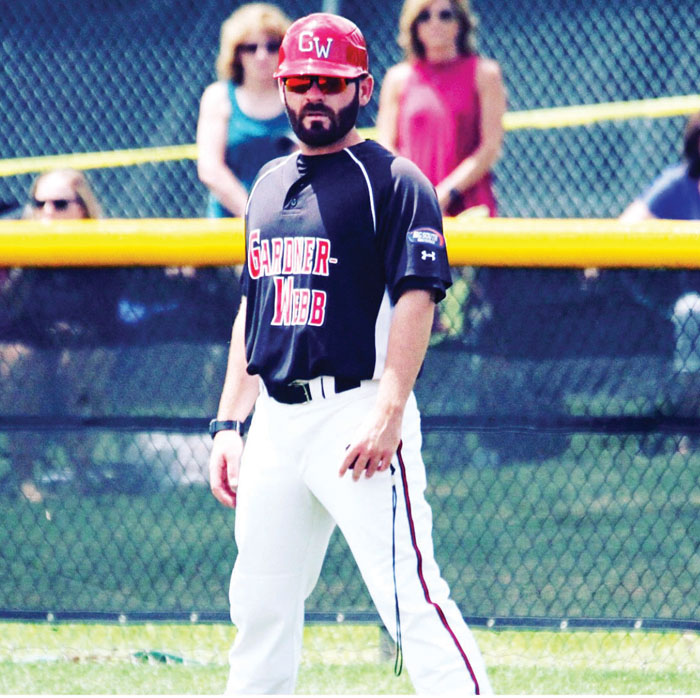 CORNELIUS — He’d already shaken off  stomach disorders and line drives off his face and right knee, so cancer never stood much of a chance against Jesse Park. 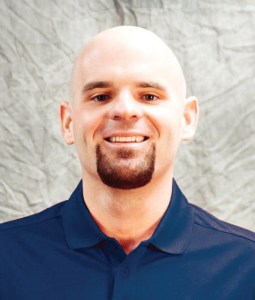 Park, a 2010 Carson graduate who has shown no signs or symptoms of cancer since March, has been named as the new pitching coach and assistant head baseball coach for Queens University of Charlotte.

“Lost all my hair during the chemo treatments, but my beard came back darker,” the upbeat Park said. “I’m OK with the trade.”

The new head coach of the Queens Royals is Ross Steedley, an East Rowan graduate who was hired on April 16.

“I believe Jesse is an elite baseball coach who will work tremendously with our pitching staff,” Steedley said. “He is a player-centered coach with a great heart, and his beliefs and values match what we will be building here at Queens.  I am fired up to work alongside Jesse each day and watch the impact he’ll have on our program.”

The tight bond between Steedley and Park actually goes back to before they were born.

Their fathers were roommates at the school that was known as Liberty Baptist back in the day, but is now simply Liberty University. The fathers, Derry Steedley and Keith Park, remain best friends.

“There are a lot of family connections,” Jesse said. “My aunt, my mom’s sister, is a Steedley. She’s married to Ross’ uncle.”

While Ross was a strapping catcher/pitcher at East Rowan and a stout player for the D-I Charlotte 49ers, Jesse stood 5-foot-7 and always looked like an underdog, even when he wasn’t.

What he lacked in size, he made up for with grit and guile, and left-handedness is a major asset when it comes to throwing baseballs.

“I got started in baseball around 9 years old in China Grove,” Park said. “I was a hitter as well as a pitcher growing up, but when I got to Carson I started focusing on pitching. Coach (Chris) Cauble saw some potential.”

Park battled a stomach disorder much of his junior year. He won two games for the Cougars.

As a senior in the spring of 2010, however, good health and opportunity intersected. Park became an unlikely pitching ace on a very good team.

“I had Tyler Freeze catching me, and we had (second baseman) Julio Zubillaga, (shortstop) Gunnar Hogan and (center fielder) Zack Grkman up the middle,” Park said. “We also had the hitting— Patrick Bearden, Kyle Bridges, on an on. All I had to do was throw strikes. I gained confidence. I believed in myself and in what I could do for the team. That was a blessed year.”

Park’s best effort of the regular season was a 3-2 extra-innings win against West Rowan. Park pitched nine innings and struck out eight.

“We won on a dropped fly ball in the ninth,” Park said. “As soon as that ball went up in the air, I was walking out of the dugout, trying to convince Coach to let me pitch the 10th. D.J. Webb was the loser, but he probably pitched better than I did.”

Carson (20-8) lost three times that season to an East Rowan team that would roll to the 3A state title. After losing a close on in the North Piedmont Conference Tournament championship game to the Mustangs, Carson headed to Marvin Ridge for the first round of the playoffs and for what most people expected to be a season-ender. Carson had never won a playoff game.  Cauble handed the ball to Park.

Park struck out only one batter, but he didn’t walk anyone. He kept fearsome hitters off-balance. It was 2-all in the sixth when Park took a line drive off his right kneecap. The ball was drilled so hard that it caromed down the right-field line. Park went down like he’d been shot. But then he was back on his feet, not only still intact, but ready to pitch to the next hitter.

“It didn’t hurt that much, I guess it just got me in a good spot,” Park said. “But when I finished the inning and got to the dugout, the knee started ballooning up.”

Ethan Free would pitch the seventh and eighth. Carson won in the eighth, a landmark victory for the program.

“The thing is we should’ve won our second-round game, as well,” Park said.

The rubber-armed Park also started that one, a 3-2 setback to Charlotte Catholic.

Park finished 6-3 with a 2.77 ERA and a team-leading 54 strikeouts. He made the All-Rowan County and All-NPC teams.

He was 5-1 in the summer of 2010 for coach Michael Lowman and the South Rowan American Legion team. Park pitched a shutout on the road in the final game of the regular season, as South finished one game ahead of Rowan County and Mooresville in the Southern Division standings.  That was the only South team that won a division title.  That 26-8 club had most of Carson’s stars and added South Rowan High players such as Blake Houston, Maverick Miles and Dylan Walker. South reached the Area III semifinals where it was eliminated by a Kernersville squad that went on to win the state title and played in the Legion World Series.

Park got a chance to pitch in college, mostly because of Freeze, his long-time batterymate. Mark Hayes was the Pfeiffer coach in those days, and he was recruiting Freeze. He saw enough of Park to offer him a spot on the team as a walk-on.

Parks’ first game action for Pfeiffer didn’t come until 2012. That was Dusty Blake’s first year as head coach. Steedley was hired that year as a Pfeiffer assistant.

On Feb. 5, 2012, Pfeiffer was locked in a tight game with Catawba at Newman Park. It was 2-all going to the Catawba seventh. Park answered Blake’s call to the bullpen.

It was a wild half-inning that began with an error. Park faced Zubillaga and walked him. Park got two outs —  a sacrifice bunt that he fielded and a sacrifice fly by former South Rowan star Ryan Bostian.

The sixth batter Park faced, the 20th pitch he threw, was his last one for a while. Catawba DH Garrett Furr sent a line drive screaming up the middle and it caught Park flush in the face.

“My first college appearance, and I get hit in the face,” Park said.  “Coach Lowman, who I went to church with, was a Catawba assistant, and I had several former teammates on the Catawba team. There were a lot of concerned people in the park.”

Park missed three weeks as he went through concussion protocol, but he was far from done.

“I was just a matchup guy at Pfeiffer, those lefty vs. lefty matchups late in games,” Park said. “But it was great to contribute against some of the best teams we faced. I gave up some hits, but I also got some big left-handed hitters out. There’s nothing those big lefty hitters hate more than a lefty who’s throwing 80.”

Park missed all of the 2013 season, as the stomach disorder that plagued him during his junior year of high school came back around.

“There was a game against Francis Marion that season, they were ranked high, and Coach Blake put me in to face their best hitter,” Park said. “I got him to pop up, and I remember Coach Blake hugging me when I came off the mound. That was an emotional moment, probably my best moment at Pfeiffer.”

Park finished his pitching career for the Falcons in 2015 and owned a degree in sports management. In his college career, he got into 28 games as a reliever, so he beat the odds 28 times.

Blake gave him a chance to stay in baseball.

“Coach Cauble had given me my first chance to coach with the Carson Junior Legion program,” Park said. “Coach Blake me a chance to be a graduate assistant and help him with Pfeiffer’s pitchers. Coach Blake (who is now the pitching coach at Duke) has been a great mentor, as far as baseball and life. He has to be one of the best in the country.”

Steedley had been out of college baseball in 2014, but he had joined Rusty Stroupe’s Gardner-Webb staff in 2015 as a volunteer assistant and started working his way up.

Park was reunited with Steedley in 2017-18 when he became a Gardner-Webb volunteer assistant. “Volunteer assistants” have plenty of duties and responsibilities, they just don’t get paid much.

Park and Steedley were roommates for a while, just as their fathers once had been.

Along the way, Steedley made a promise to Park that if he ever got a chance as a head coach, that Park would be his first hire.

But their roads went in different directions for a time.

By 2019, Steedley’s baseball profile was on the rise. He was Gardner-Webb’s recruiting coordinator as well as hitting and catching coach.

Park got married in the fall of 2018 to Clemson graduate Olivia Palmquist. He actually was out of baseball for a while, seeing if his sales pitches worked in the corporate world as well as they had with recruits.

Then a lot happened quickly.

“In April (of 2019), we found out Olivia was pregnant,” Park said. “A few months later, I discovered a lump on my neck late and I was diagnosed with Hodgkin Lymphoma.”

“When your wife is seven months pregnant and you’re going through chemo, you grow up a lot,” Park said.

The baby’s father had the support of family and friends and competed with cancer the way he once had with hitters. There were 12 chemo sessions. The last one was on March 19.

Park’s best friends, Steedley and Bridges, who had played first base behind him at Carson, were there for the 12th one, to see him go the distance one more time.

“Jesse was the best competitor on the mound I’ve ever been around,” Bridges said. “He’s the best friend I could have, and an even better man.”

The news has all been good since Park’s last treatment. The outlook is favorable. Scans in mid-April, about the same time Steedley was being named as Queens’ head coach, came back normal, with no sign of cancer.

“People tell me that I’ve been through a lot, but I’d do it all again to be where I am now,” Park said. “God has done a whole lot of work for me. My wife is amazing, and I’ve got a 5-month-old who smiles all the time.”

And now Park will be returning to baseball. He and Steedley will be reunited as a coaching team at Queens.

Park wouldn’t have held him to it, not after everything that’s happened, but Steedley lived up to his vow to make Park his first hire if he became a head coach.